A care assistant who comfort ate her way to 21 stone after her son was stillborn has dropped more than six stone in a bid to start fertility treatment.

Cherie Lupu, 29, from Wallasey, Wirral, was devastated after carrying baby Jayden to full term in 2010, only for complications to mean he did not survive.

She then started piling on the pounds, eating to quench her heartbreak, and would gorge on doner kebab takeaways and McDonald’s.

When she married husband Marian, 23, a chef, in 2017 she knew she wanted to have children with him, but Cherie was dubbed ‘too fat for IVF’.

At the time Cherie had a body mass index of 47, but a BMI limit of 30 is required for NHS treatment. 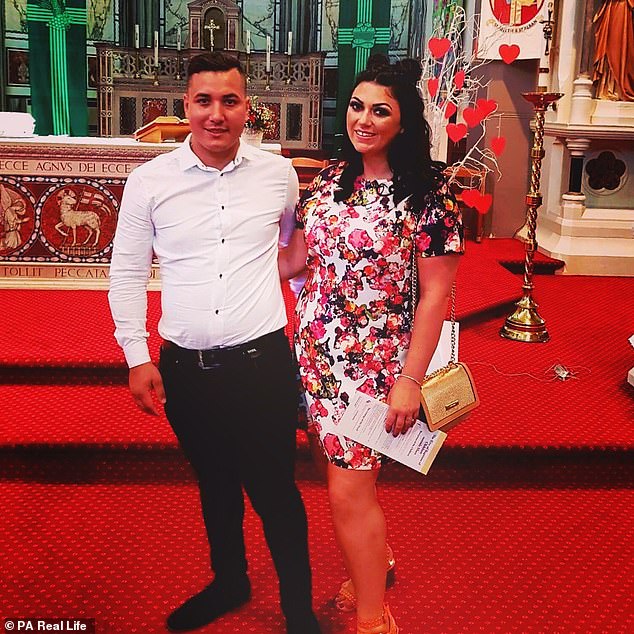 Cherie Lupu, 29, pictured now with her husband Marian, has lost more than six stone so that she can achieve her ‘dream of becoming a mum’ and have IVF treatment 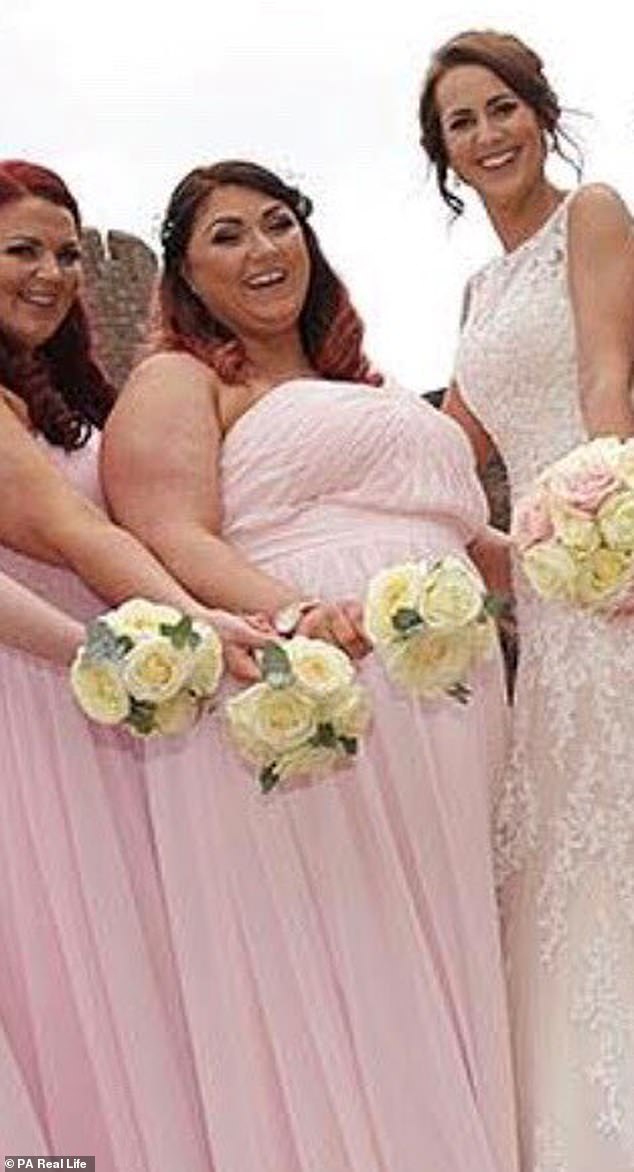 Cherie, pictured centre before dropping the weight, turned to comfort eating after her son Jayden was stillborn in 2010

Cherie said: ‘I always knew I was big but when I was told by the doctors that I wasn’t eligible for IVF because of my weight, I knew I had to change.

‘Not only do I feel healthier than ever before, my dream of becoming a mum is coming closer with every pound I lose.’

After splitting up with her baby’s dad, whom she does not want to name, Cherie met Marian in 2015 when they worked at a Wallasey takeaway called Charcoal Chicken.

Striking up an instant friendship, her job was only temporary and she soon landed a position as a holiday rep in Mallorca. 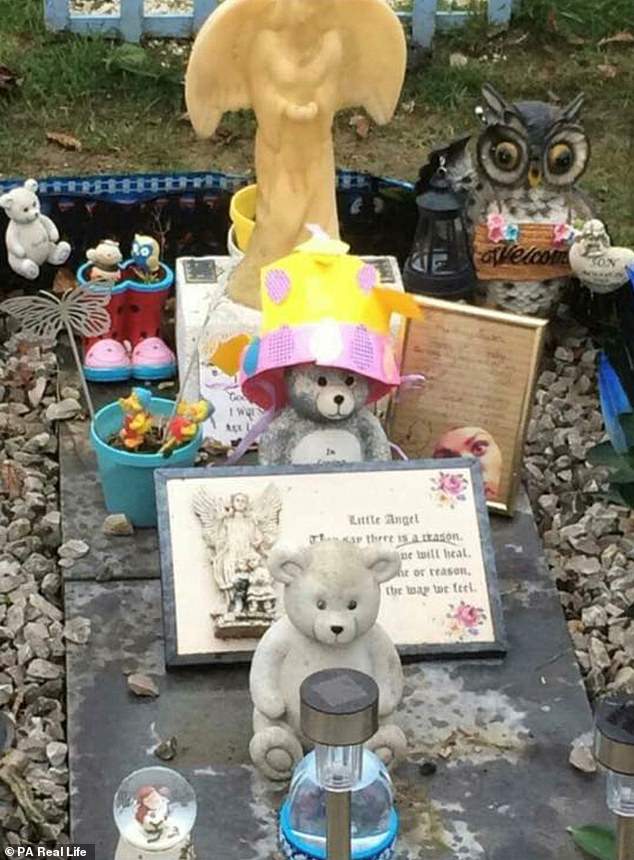 The care worker carried her baby to full term but said ‘there were complications and Jayden wasn’t destined to be part of this world’. Pictured is Jayden’s grave 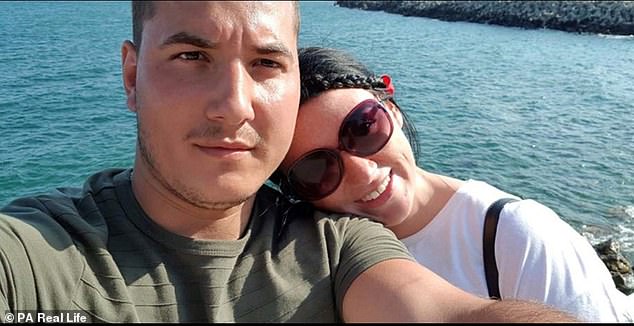 Cherie and Marian, pictured together recently, started trying for a baby after their wedding – and after a few months Cherie went to a fertility clinic where she was given ovulation therapy 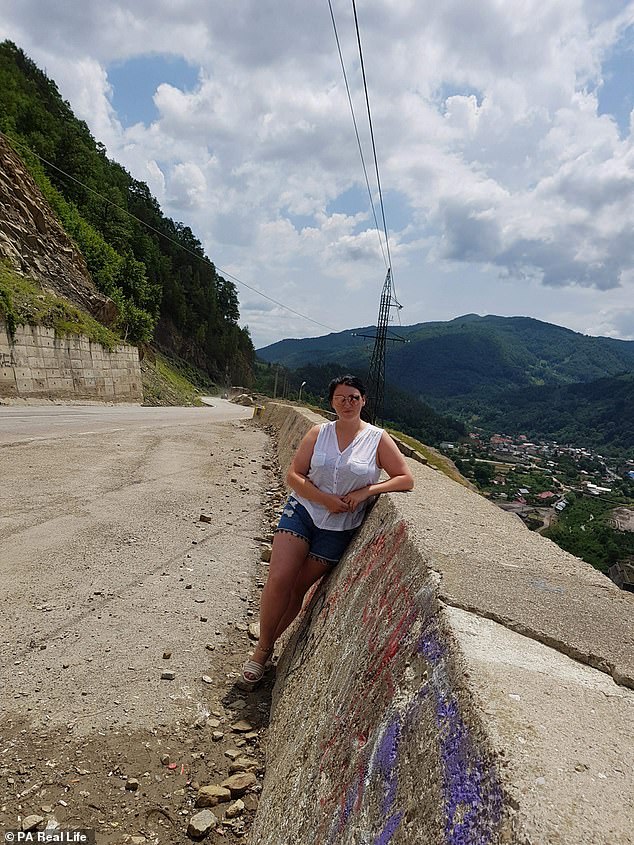 Doctors advised Cherie, pictured on holiday after her weight loss, the best hope for having another baby would be IVF treatment, but as she then weighed 21 stone she was too fat to be accepted on the NHS

But, missing Marian throughout the season, she came back and they confessed their love – marrying in October 2017 and, soon after, trying to start a family.

Cherie said: ‘Obviously starting a family after everything I’d been through in the past was a big deal, but I couldn’t wait to be pregnant again.

‘After a few months I started to wonder if there was something wrong with me and I booked in an appointment at the fertility clinic.’

Six months after her wedding a fertility specialist initially found no problem, but a keyhole investigation, or larparoscopy, led to suspicions she had polycystic ovary syndrome (PCOS) – a common condition, affecting how the ovaries work. 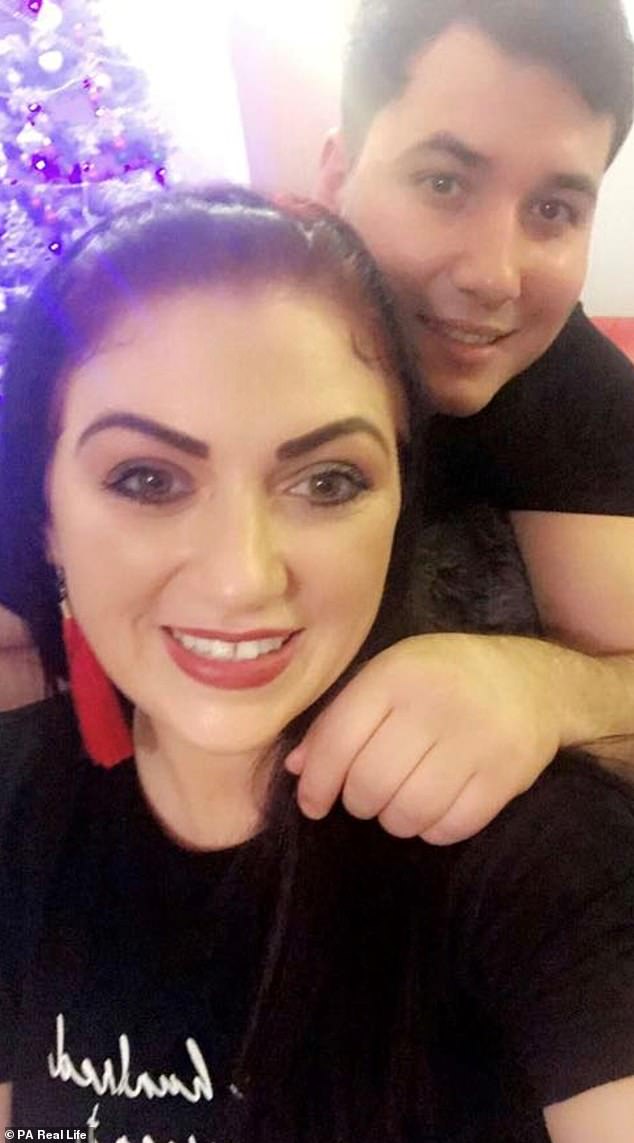 Cherie, pictured with Marian, then cut her calorie intake down to just 1,200 a day with the help of the Bodyline Weight Loss and Wellness Clinic 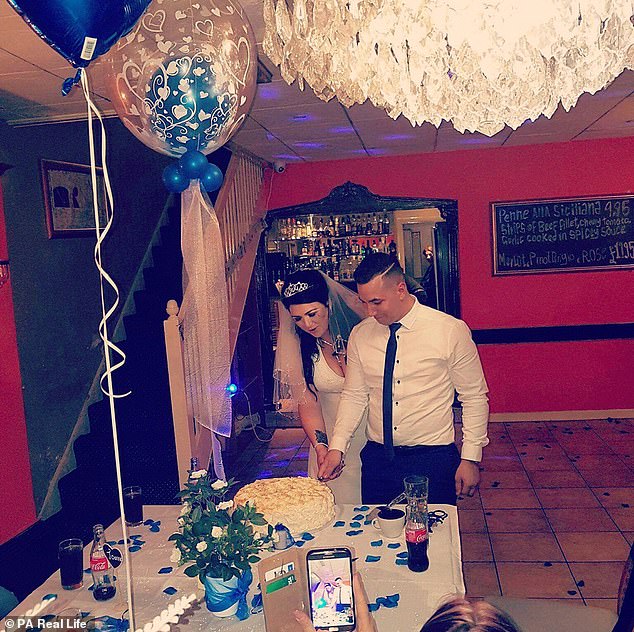 Cherie, pictured with Marian on their wedding day, said deciding to start a family after losing baby Jayden was ‘a big deal’

But this was not confirmed and, with no definite diagnosis of what was wrong, she was given ovulation therapy to help her produce more eggs.

Soon Cherie was spending up to £50 a month on weekly pregnancy tests, saying: ‘I became obsessed with finding out whether I was pregnant, taking several tests a week.

‘But every time it was negative and I’d have to go through all that heartache again.’

In January 2018, with Cherie still unable to conceive, doctors advised that her best hope would be through IVF treatment.

Unable to afford it privately, as it cost thousands of pounds, she was told that, then weighing 21 stone and wearing size 20 clothes, she was too fat to be accepted for treatment on the NHS.

A yo-yo dieter since the age of 20, Cherie was at a loss with what to do about her situation. 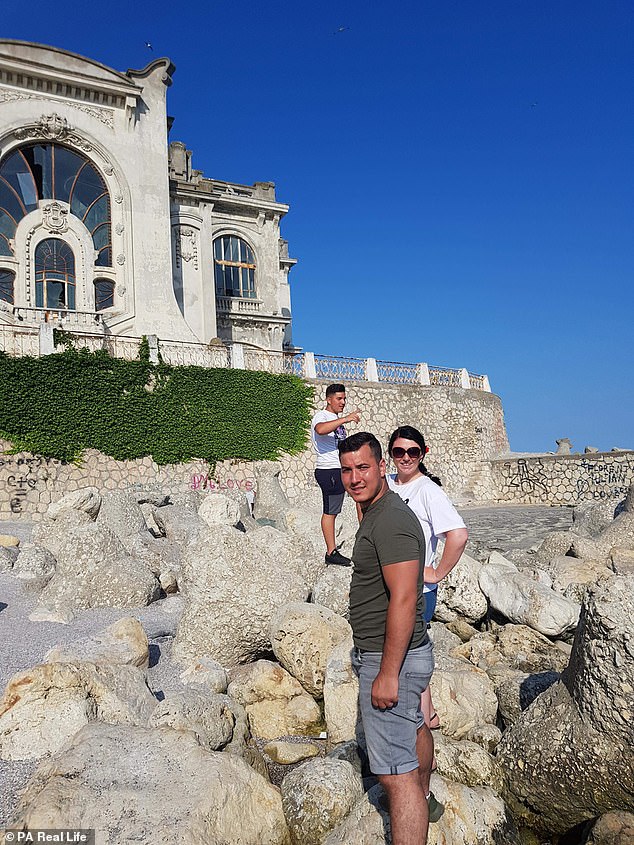 To slim down, Cherie – pictured after her weight loss with Marian – started eating fruit pots for breakfast, healthy pasta or couscous salad at lunch and a protein heavy meal for dinner 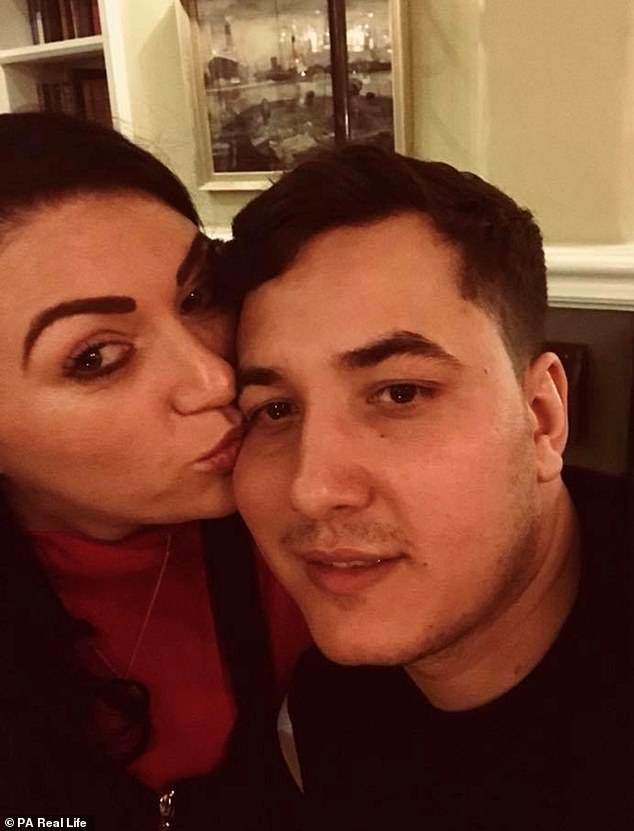 When she weighed 20st, Cherie, pictured with her husband, used to eat bacon butties for breakfast and McDonald’s chicken nugget meals with a double cheeseburger for lunch

Since losing her baby on April 2, 2010, food had been her comfort. She said: ‘It was my first and only pregnancy, and while it hadn’t been planned, I was over the moon to be welcoming my son into the world.

‘I carried him full-term, but unfortunately there were complications and Jayden wasn’t destined to be part of this world.’

‘Then, despite not being fat before, after putting on all the baby weight I turned to food straightaway.’ 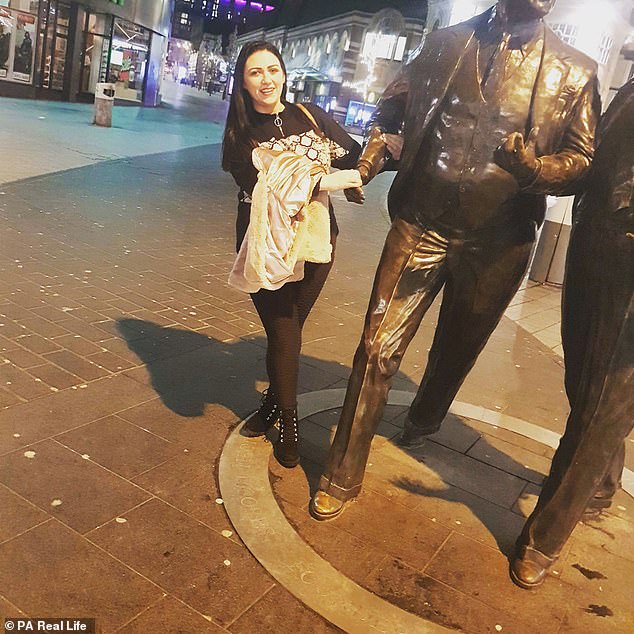 Cherie, pictured on holiday after her weight loss, said she has a ‘much healthier relationship with food’ now that she’s watching what she eats and trying to cut back on calories 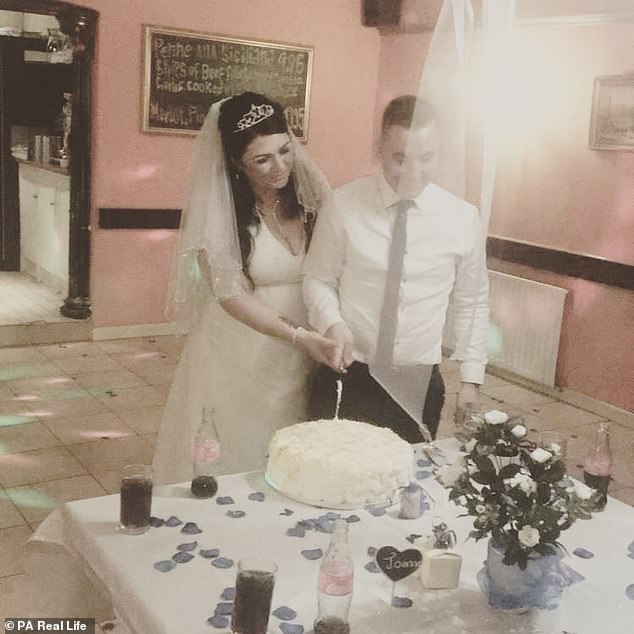 Cherie, pictured with Marian on their wedding day, is now just two points off her goal BMI of 30 and is hoping to start IVF treatment in September

She said: ‘A friend had lost a lot of weight with Bodyline, so I made an appointment and from my first meeting with the clinical team I knew it was going to change my life – for the better.

‘The doctors and nurses are totally non-judgmental and so supportive and have given me a personalised plan that I can stick to.’

Her old diet used to consist of bacon butties for breakfast, McDonald’s chicken nugget meals with a double cheeseburger on the side for lunch, and doner kebab takeaways for dinner, with family packs of crisps and family size bars of chocolate as snacks throughout the day. 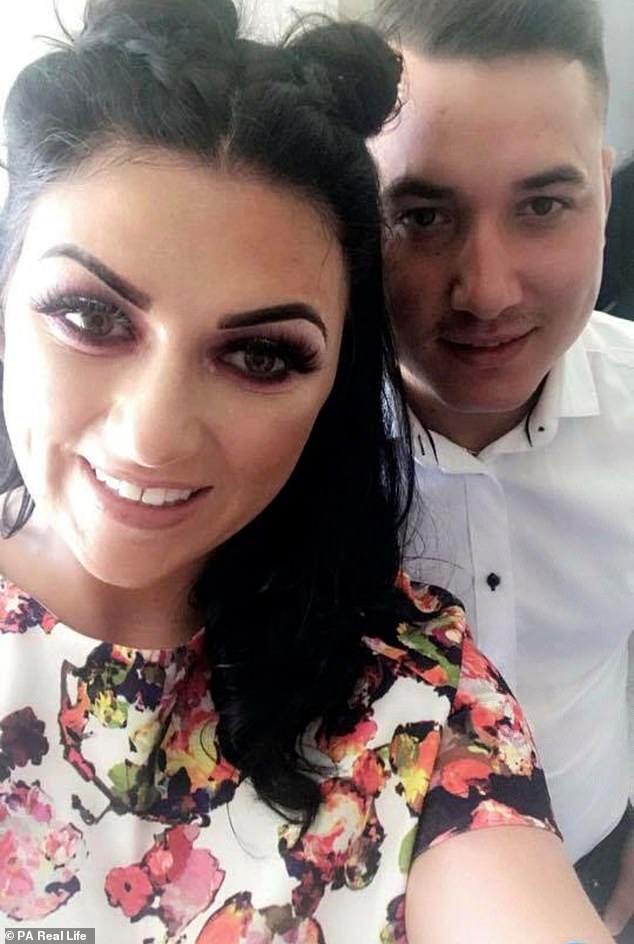 The care worker, pictured with Marian now, had a personalised plan to help her lose weight

Instead, she now she eats fruit pots for breakfast, healthy pasta or couscous salad at lunch and a protein heavy meal for dinner.

Cherie said: ‘I wouldn’t say I’m an angel by any means. I have a set calorie count for each day and stick to my meal plans, but I have a much healthier relationship with food now.’

Now just two points off her target BMI of 30, weighing 14st 9lbs and a slim size 14, Cherie has her sights set on beginning her IVF treatment in September.

She said: ‘I’m going away to Antalya, Turkey, in July, but as soon as I’m back I want to get the wheels in motion. In a short space of time I’ve lost over six stone – more than a quarter of my original body weight.’