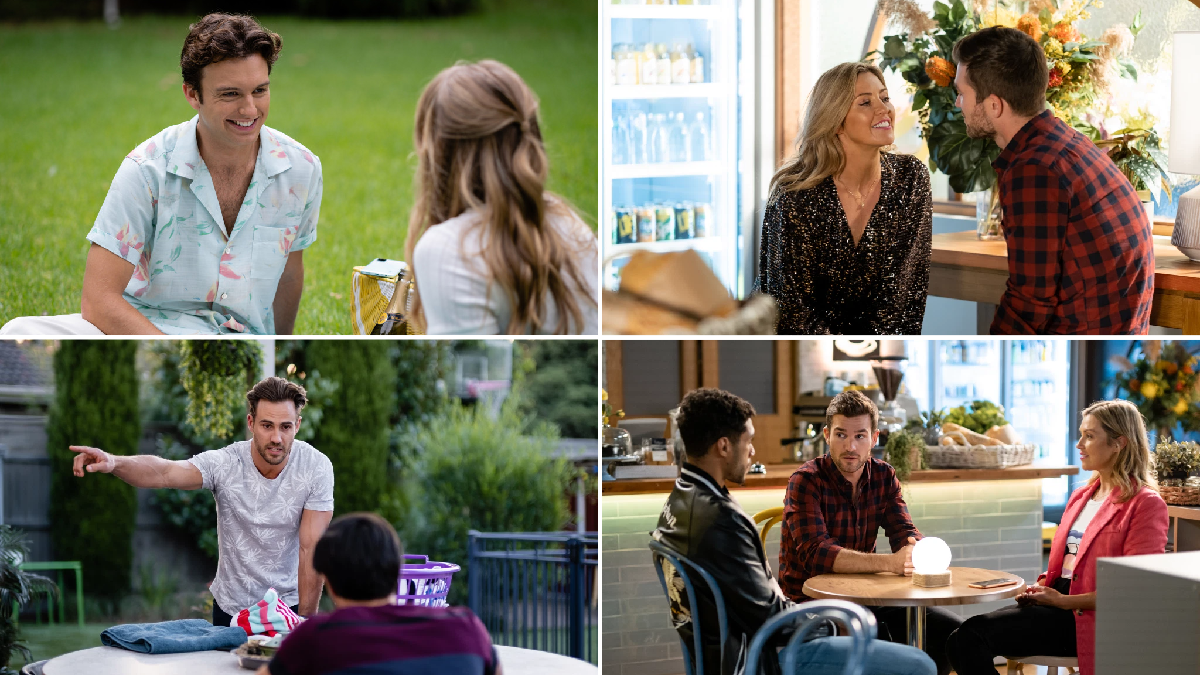 This week is all about the Nicolette-Chloe-Leo-David-Aaron saga – it’s finally about to blow up in their faces as Nic runs for cover. Leo (Tim Kano) strives to get what he wants in Neighbours, no matter the costs. How many lives will be ruined by his actions?

And when David (Takaya Honda) learns what happens, he takes his anger out on his brother’s face.

Elsewhere, Karl Kennedy (Alan Fletcher) is having a right old time of it when he realises he has a rival in Jane (Annie Jones) and he’s not sure he can compete.

Ned (Ben Hall) is losing his grip on Amy (Jacinta Stapleton) to Levi (Richie Morris), but he’ll do whatever he has to in order to make sure he doesn’t lose his prize.

And Jesse (Cameron Robbie) is desperate to get back into Harlow’s (Jemma Donovan) good books, but how far will he go?

Here’s what’s ahead in Neighbours.

When Chloe can’t face going home, she flees to the vineyard and asks David and Aaron to cover for her. Little does she know, Leo is there waiting for her with a bottle of wine. One thing leads to another, and the next thing Chloe knows is she’s waking up surrounded by evidence of the night before, including wearing Leo’s clothes. Did they sleep together?! She has no idea and is panicked when all the clues point to yes. She heads home with her tail between her legs and after a couple of choice questions from Nicolette, the dam breaks and the truth comes pouring out. Nicolette is horrified to hear how her girlfriend cheated on her and even worse when she learns David and Aaron lied for her.

Nic goes on the run

To make matters even worse, when Paul gets the wrong end of the stick, he threatens Nicolette into keeping up her end of the deal. Nicolette is left crushed that everyone has turned against her despite the fact she’s done nothing wrong, and decides there’s only one thing for it – despite being heavily pregnant, she runs away.

Karl and Jane are excited about the local talent category in the Shorts and Briefs film festival, especially when the prize money has them seeing dollar signs – it’s a not-to-be-sniffed-at $5000. Karl is pretty sure he has it in the bag until he learns what Jane and Clive have planned, it’s way beyond what he had in mind. Jane is on course to making her short film by unleashing her inner creative animal, but Clive isn’t convinced he has what it takes to be her star. But when he catches sight of Toadie’s prowess, he’s given an idea.

Ned is still going head to head with Levi, but in a strange twist of fate, he will not only see his rival pull out in front, he’ll help him do it. Amy is excited about her next date with Levi, but she’s left miffed when he cancels on her for no good reason. Seeing her a bit glum, Ned explains it’s because Nicolette has gone missing and Levi is helping with the search effort. Amy is warmed by this towards Levi, has Ned just shot himself in the foot?

Jesse is desperate to mend some bridges and he does so in a surprising way. Harlow learns the Quills bought the dodgy land, so she goes on a mission to find Jesse to learn what was behind it. He confesses he set his family up after becoming disillusioned with the cheats. He’s endeared himself to Harlow, is there a way forward for them yet?

When Chloe finds Leo he confirms they didn’t in fact do the dance with no pants, so it’s a race against time to get to Nic. They’re too late, she’s packed up and gone in the time it’s taken to get their story straight.

When news reaches David’s ears of how terribly wrong things have gone, and all because of Leo, he loses the plot. He unleashes his anger through his fist into Leo’s face.

When Aaron discovers this, he lets his own rage fly at his sister. This is one broken family, but can they put their anger aside long enough to find a vulnerable Nicolette?