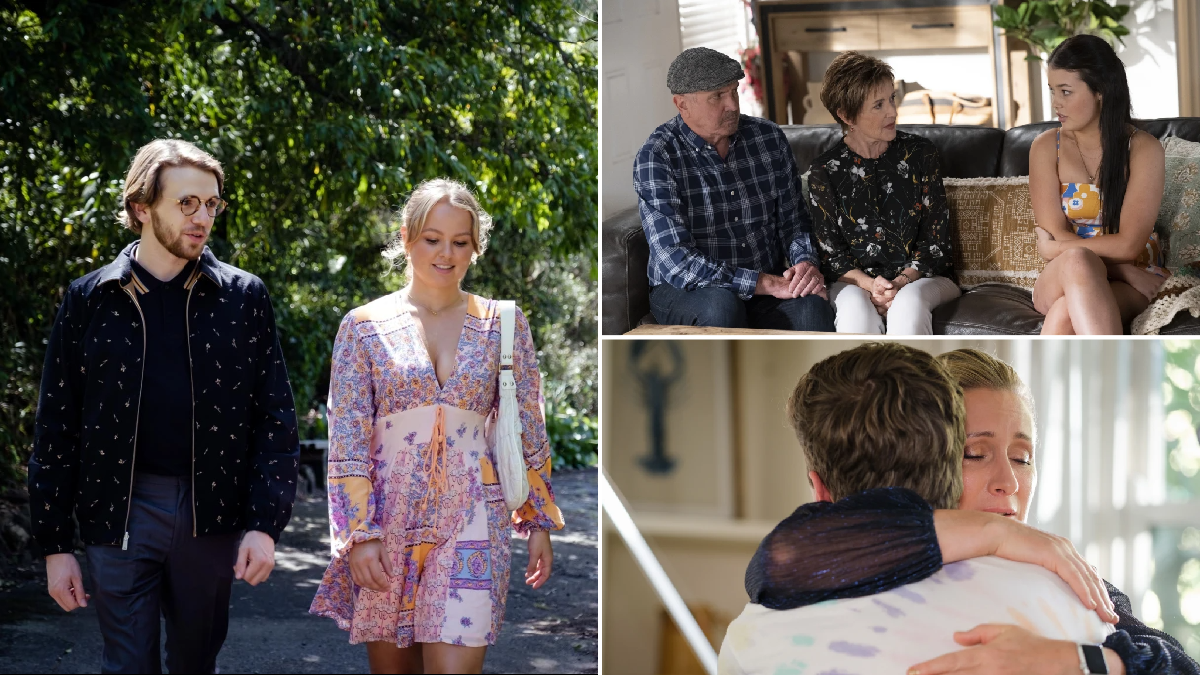 Ripples are sent through Erinsborough this week when some bad news drops, a kidnap takes place, and a possible affair comes to light in Neighbours.

Hendrix (Ben Turland) is not wanting to face up to his huge health issue, and his worries are compounded when the news of his diagnosis gets out and it’s very badly received. He still has his real family to tell, but what will happen when he does?

Melanie (Lucinda Cowden) could be in for a nasty shock when she notices Toadie (Ryan Moloney) and Amy (Jacinta Stapleton) getting too close for comfort.

Harlow’s (Jemma Donovan) having the worst week of them all when Corey (Laurence Boxhall) enacts the next stage of his plan and before she knows it, she’s the centre of a kidnap plot. What will Corey do to her? Could Freya become collateral damage?

And life sucks for Terese (Rebekah Elmaloglou) right now as she tries to start divorce proceedings but Paul Robinson (Stefan Dennis) decides to dig his heels in. Could he take her to the cleaners?

Here’s what’s ahead in Neighbours.

Can one of Neighbours’ most solid couples be heading for splitsville? Amy is having a rough time of it after losing Ned and is not enjoying being around other loved-up couples. Melanie gets excited about an upcoming date night with Toadie, especially as it’s finally a night without kids. But just as she gets herself ready for the romance, in swoops Amy, who manages to totally scupper her plans. While Melanie licks her wounds of disappointment, she gets another kick when she’s down when Amy criticises her plans for the Drinks Diva. What’s worse – Toadie totally backs Amy. Red flags start flying for Mel, is her intuition telling her something about these two?

Hendrix is bowing under the weight of his diagnosis of a life-threatening lung disease. But with the Rodwells in town and their involvement with him contracting the disease being rubbed in his face, he’s not happy. Sadly for him, his hand is forced and the news gets out to the Neighbours that he’s sick before he’s ready to tell them. They are not happy that he has kept this a secret and he is left dumbfounded by their reaction. Levi tries to support him as he realises he has bigger fish to fry – he now has to tell his real family in Sydney. Feeling overwhelmed, Hendrix dreads his trip and decides he’ll just keep quiet. But he hasn’t accounted for Alana’s sixth sense that something is up and before he knows it, he’s backed into a corner. What will the stress do to sick Hendrix?

Corey wants Harlow in the Order and he wants it to happen now, so he ups the ante by drugging her to get her fully under his control. This doesn’t go unnoticed as Harlow starts behaving weirdly, so he tries to hide his tracks by isolating her further. Harlow has no idea what’s going on; she thinks Corey truly cares about her and is comfortable with his attention. David, however, smells a rat. He starts to get a bit suspicious, so Corey moves his game up a level – manipulating Harlow against her uncle. It’s a temporary fix to a bigger problem. David continues to sniff around, so Corey decides to physically distance her, whisking her away on a ‘weekend trip’. Harlow is delighted, but little does she know, she might not be coming back.

The Rodwells are still reeling from their reception at their barbecue. Knowing when they’re not wanted, they decide it’s not worth sticking around and that it’s time to leave. Sadly, their finances won’t allow it so they’re a tad stuck in a sticky situation. The Kennedys reach out and begin building bridges, prompting the Rodwells to have a change of heart – they’re here to stay.

Sparks for Levi and Freya

Freya and Levi bump into each other, but instead of it being awkward, it’s clear there’s still something between them. This puts a spring in both their steps and when they meet up later, the sexual tension is back. Will they forget the past and try to move forwards?

The atmosphere at the vineyard is off and though Glen wants to support Kiri, he’s clueless as to how. Kiri is in a terrible place and just wants to run away from all the troubles, and when Glen realises he’s on the verge of losing her, he does everything in his power to get her to stay. Will it be enough?

Instead of turning to Glen for support, Kiri goes to Chloe for comfort and asks her to sleep over as she doesn’t want to be alone. She intends for this to be an innocent, supportive sleepover, but will it become more?

It’s time to kick off the divorce proceedings so Terese mentions to Paul she’s ready to get going on this and lay out the terms. Paul goes in with an insultingly low offer that forces Terese to hit back. She wants to be an equal partner in Lassiters, which royally gets Paul’s goat. Not prepared to hand over his business, he gears up for war, and Terese is ready for him.

Scenes air from Monday May 16 on Channel 5.