What NOT to do while ordering coffee: Starbucks worker reveals her FIVE biggest customer ‘icks’ – from not knowing what they want to people who ‘shove their phones’ in her face demanding elaborate TikTok drinks

A Starbucks barista has caused a stir among coffee lovers after revealing the five biggest ‘icks’ she gets when dealing with customers.

Keicha Halsell, from Florida, decided to talk about the things that really make her mad at work in a TikTok video that has since gone viral with more than 49,000 views.

In the clip, where she is seen standing in her uniform and squeezing a bag of caramel, she starts by saying: ‘I’m pretty sure I can get in trouble for this video, but I’m gonna do it anyways.’

She then reels off some of her pet peeves, with the first one being when people stand in a long line and then ‘they wait like another whole five minutes to tell us what they want’ when they get to the till. 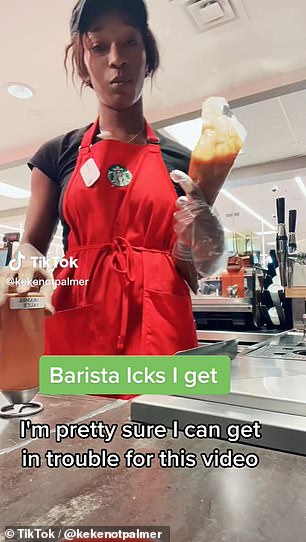 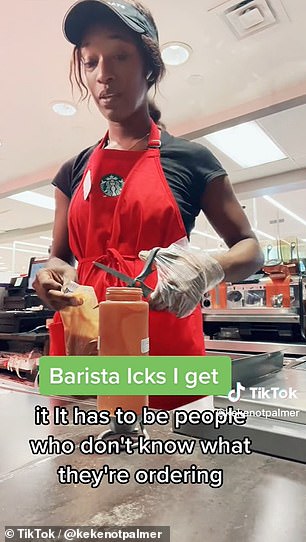 Keicha Halsell, from Florida, decided to talk about the things that really make her mad at work in a TikTok video that has since gone viral with more than 49,000 views

Her second ‘ick’ is people who ask for milk alternatives, including oat and soy, only to ask for ‘sweet cream foam’ on the top.

Keicha’s third ‘ick’ – which she says is her ‘biggest of all’ – is when people order things that they have never tried before and then they decide they don’t like it, and she has to make a drink ‘five times.’

The frustrated barista says: ‘How is that on me? [It] gets on my nerves.’

Moving to her fourth annoyance, Keicha says people often come in and ‘shove their phones’ in her face demanding an off-menu TikTok drink. 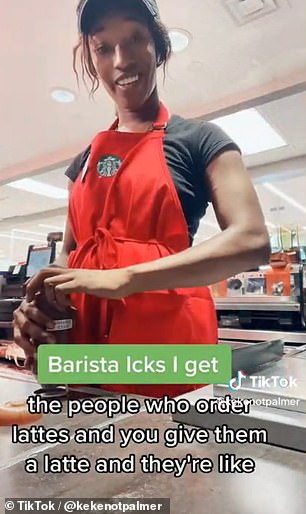 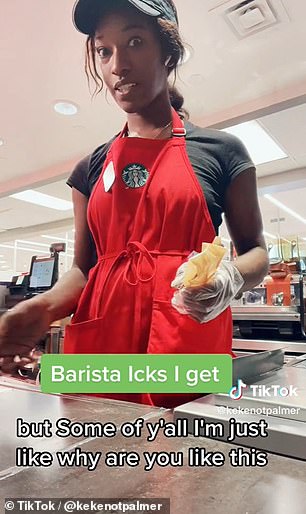 After posting the video, hundreds of viewers have commented with many saying Keicha has exacerbated their anxiety when it comes to the coffee shop experience

‘Last but not least,’ Keicha reveals her fifth ‘ick’ is when she makes a latte and then suddenly the customer says: ‘I forgot to say iced.’

She highlights that the customer could have told her earlier when they heard her steaming the milk.

After posting the video, hundreds of viewers have commented, with many saying she has exacerbated their anxiety when it comes to the coffee shop experience.

‘This is why I have ordering anxiety. That’s why I’m staying home to make my own coffee,’ one coffee drinker said.

Another social media user added: ‘This is why I just get my coffee at Speedway. Starbucks is just too much pressure.’

Some viewers said they were guilty of committing one of Keicha’s ‘icks,’ but they tried to defend their position.

On the subject of mixing non-dairy milk with dairy, one Starbucks customer said: ‘I get oat milk with the sweet cream foam because it tastes good.’

While commenting on taking a long time ordering, someone else wrote: ‘I’m definitely ick #1. I wait in line, and I’m blind as hell so I have to wait until it’s my turn to see the menu lol.’

Other commenters accused Keicha of ‘being in the wrong line of work’ and advised her to find another job.

However, some Starbucks employees sided with Keicha and shared their own stories.

‘I use to have a lady who would tell us we weren’t making her drink right so she could get a free drink coupon from whatever store manager was working,’ one worker said.

Another wrote: ‘My favorite was always “is this mine?” “No ma’am. That hot coffee with the name Brian on it is in fact NOT your frap.”‘

If you enjoyed reading this article…

‘I decided to stop hating myself and love my body’: Woman who was told she was ‘too fat to model’ proves her haters wrong by posing for brands like Kim Kardashian’s SKIMS, Khloe’s Good American, Fabletics and Sephora

Inside Cher’s rollercoaster love life after she sparked engagement rumors to beau Alexander ‘AE’ Edwards, 36 – from her messy divorce with Sonny Bono that resulted in him keeping her ENTIRE fortune to her secret romance with Tom Cruise

‘I’m good in school, I make good grades, can I please have my daddy back?’: Daughter, seven, writes heartbreaking letter to Santa after her father is shot and killed days before Christmas