When tall poppies get cut down there's usually a media feeding frenzy, though the spectacular fall from grace of US astronaut Lisa Nowak has an enduring weirdness that was always going to capture the imaginations of artists.

Nowak was the ultimate high flier. She attained heroic status as an astronaut selected for NASA space missions, notably as a robotics specialist with the Discovery shuttle. But in 2007 she experienced a psychological collapse on what should have been solid ground. 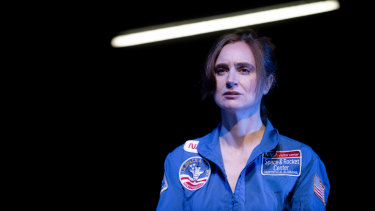 An affair with a fellow astronaut, as Nowak's own marriage broke down, ended when her lover dumped her for a younger woman, and the love triangle tipped Nowak over the edge into obsession. Infamously, she drove 14 hours from Houston to Orlando, Florida (according to initial reports, wearing an adult diaper so she wouldn't have to stop), eventually confronting her rival in a car park and threatening to abduct her.

Nowak's breakdown remains and enduring fascination: the 2013 play Starcrosser's Cut attempted to plumb her state of mind, and Lucy in the Sky, starring Natalie Portman, will bring her unravelling to cinemas later this year.

Unfortunately, Rebecca Meston's Drive can't quite decide what it wants to explore, leaving us floating through an atomised and spacey sort of expressionism which, although it replicates a dissociative state in the audience, never risks the dramatic articulation of larger themes.

It amounts to an undercooked performance installation – a collision of stolid micro-acting from the Nowak-figure (Lizzy Falkland), with glassy melodrama from her lover and husband (Christopher Pitman) and the obnoxiously heightened ditz of her victim (Ashton Malcolm), as Nowak imagines her.

It's disorienting and alienating in its exposition and the lack of technique – especially the loose American accents – can grate. The piece might have been less problematic had the design elements converged, but they obscure rather than enhance the performances – sometimes, thanks to an overactive smoke machine, quite literally. 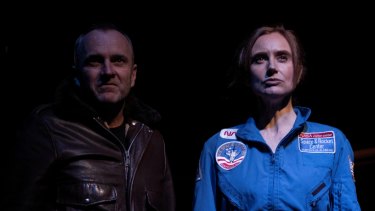 Despite its road-movie structure, Drive never establishes much momentum or suspense and its brevity stops short of any serious investigation of the toxic aspects of hero-worship, or the ease with which Nowak's stalking seems to replicate patterns of male privilege and aggression, or the trauma that caused her to act as she did.

If it's to become the complex psychodrama it strives to be, Drive needs to sketch the cracked interior of its protagonist in greater detail, with a more expansive and political sense of dramatic poetry. Generalities about "fallen women" and our cultural obsession with them do not, by themselves, provide enough fuel for take-off.