‘It’s heartbreaking’: Mother-of-four who saves supermarket food from bins and gives it to families in need for free says inflation has caused ‘massive influx’ in demand

A primary school teacher who hands out supermarket food set to be binned to families in need says inflation has caused a ‘massive influx’ in demand.

Mother-of-four Deborah Doloughan from Middlesbrough, Tyne and Wear, who is always looking for a bargain in the reduced aisle, has hated food waste since working in a fast food restaurant in her twenties.

Now 41, she has become a ‘food waste hero’ after joining an app that redistributes supermarket products nearing their use-by date to make sure they don’t get binned.

During the November 2020 lockdown Deborah joined the Olio app and began volunteering – but 19 months on she has never been busier as the cost-of-living crisis has sent demand through the roof.

Now, with the help of her husband James, 43, a carer, and their four children, Millie, 11, Jacob, 10, Luke, seven, and Isaiah, one, Deborah collects food from her supermarket and hands it out to people in her community. 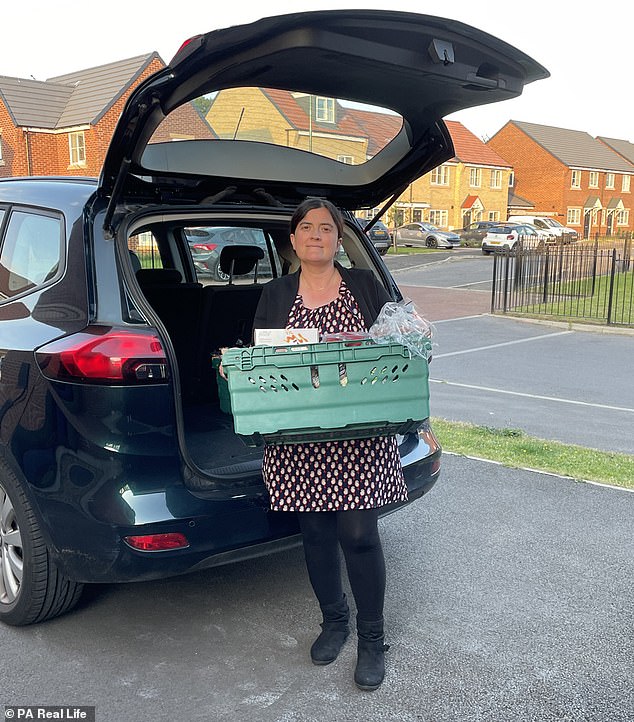 Mother-of-four Deborah Doloughan, 41, from Middlesbrough, who buys reduced price food has rescued 60,000 items worth thousands of pounds from being binned in just 19 months

She said: ‘I became so passionate about food waste and shopping in the reduced section that my friends started calling me the Whoopsie Queen.

‘Now I feel like joining the Olio app and making sure as much food doesn’t go to waste has been my calling.

‘Also, it means my whole family can join in with my passion.’

On top of her full-time job as a primary school teacher, Deborah spends five nights each week collecting surplus food from her local supermarket, before snapping pictures of it and listing it on the app – eagerly waiting for people to come by and pick it up.

She said: ‘My children have been assisting me by collecting the food with me and getting pictures of it sorted, so people can see what we have.

‘One of my sons has made friends with a lovely old lady and they exchange flowers and chocolate, which is just gorgeous.

‘For me, that’s so important and I want to instil these values in my children.’ 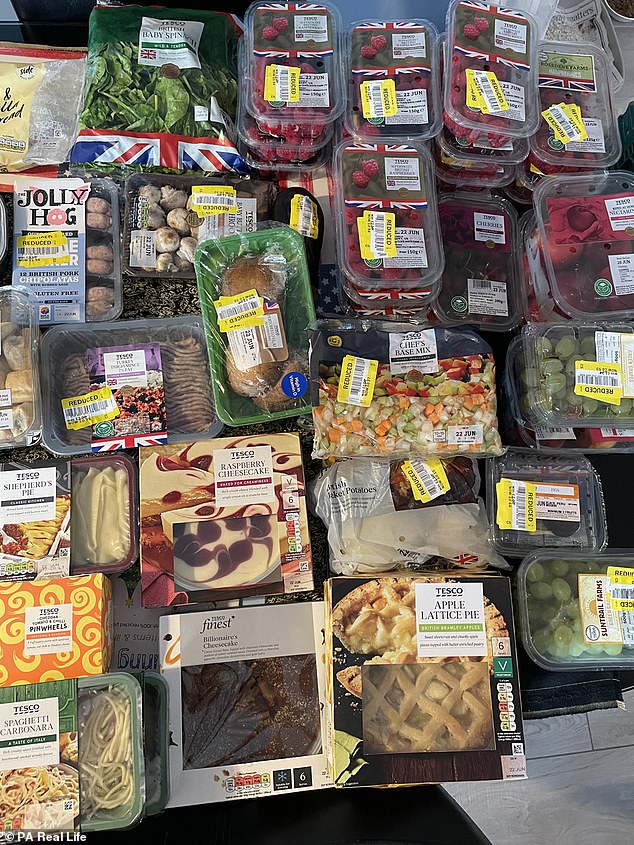 The primary school teacher distributes the yellow sticker food, such as cheesecake, apple pie and minced meat, to people for free through apps such as Olio 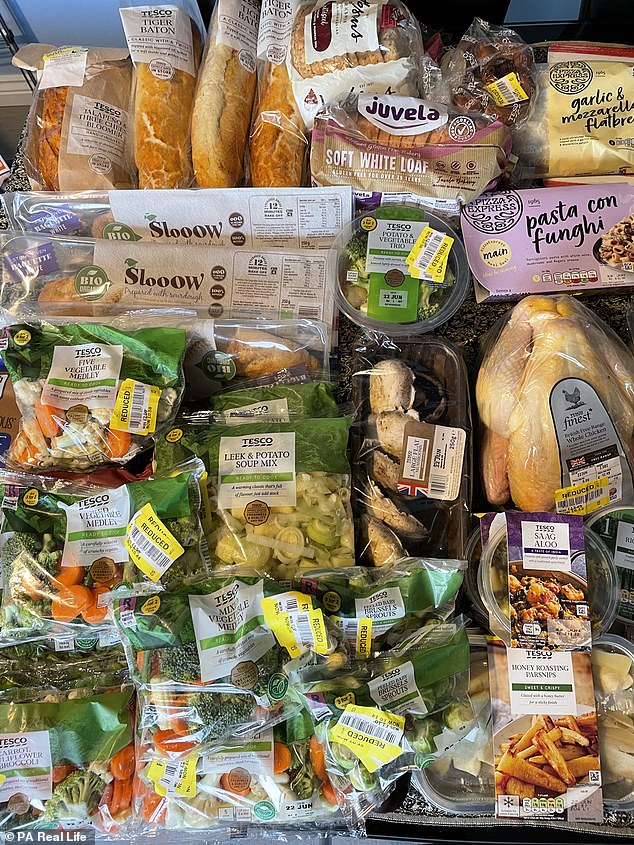 A typical food shop for Deborah consists of many packets of chopped veg , meat, bread, and ready meals 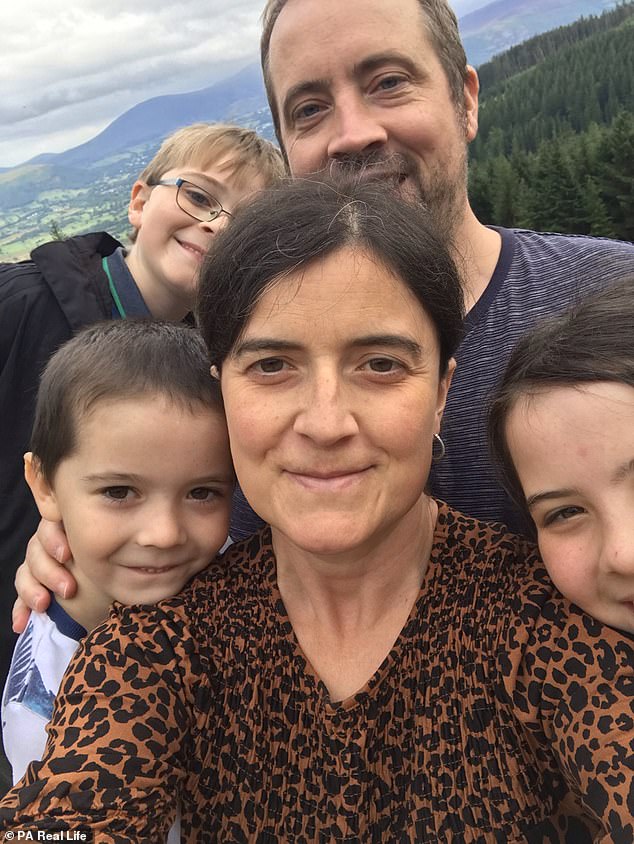 With the help of her husband James Doloughan, 43, a carer, and their four children, Millie, 11, Jacob, 10, Luke, seven, and Isaiah, one, Deborah collects the food and hands it out 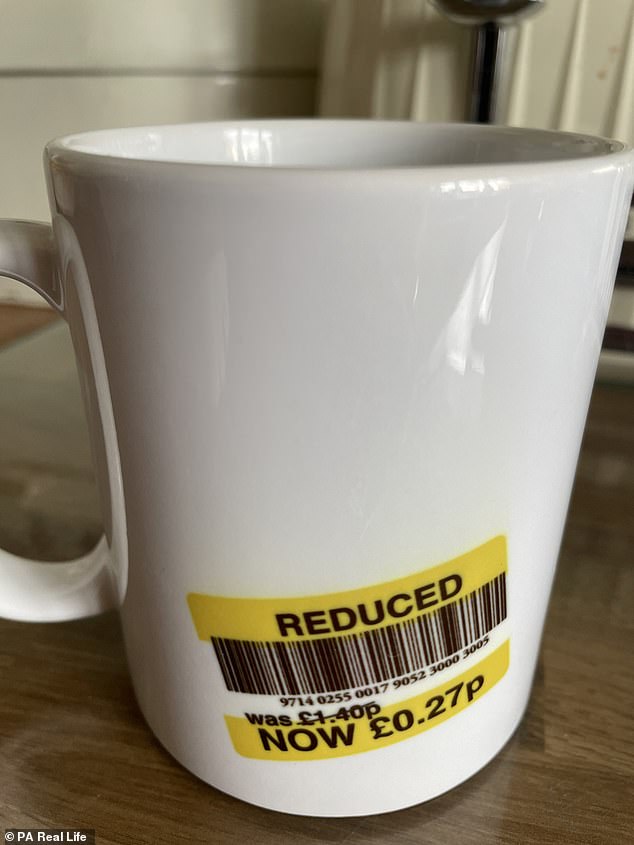 She bought the reduced mug for a whopping saving at just 27p after it was reduced from £1.40p

With food prices soaring as inflation reaches a 40-year high, Deborah says more people than ever have dropped by her home to collect free goods.

She said: ‘I have noticed a massive influx of new people, as I know the regulars and I know their names.

‘But with the food price crisis, more and more people are relying on services like this. 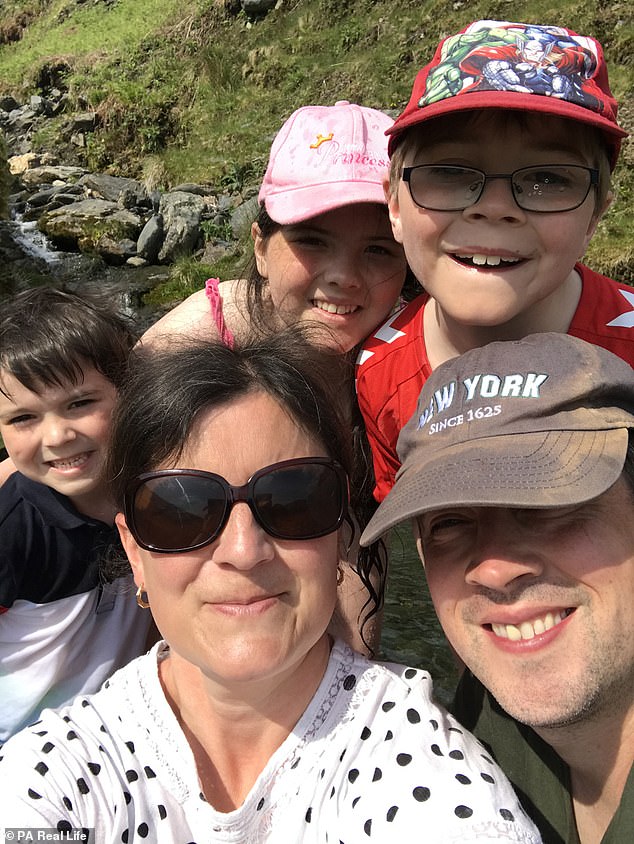 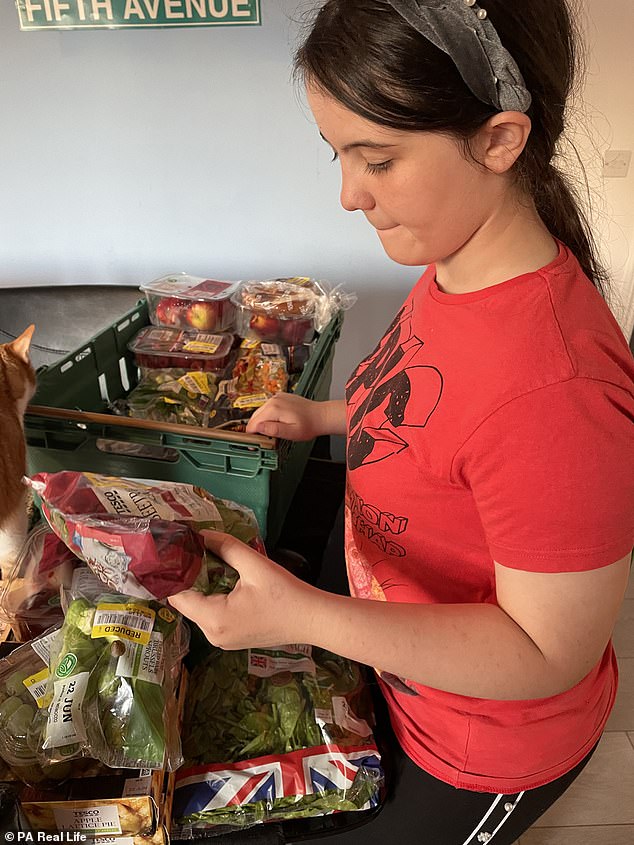 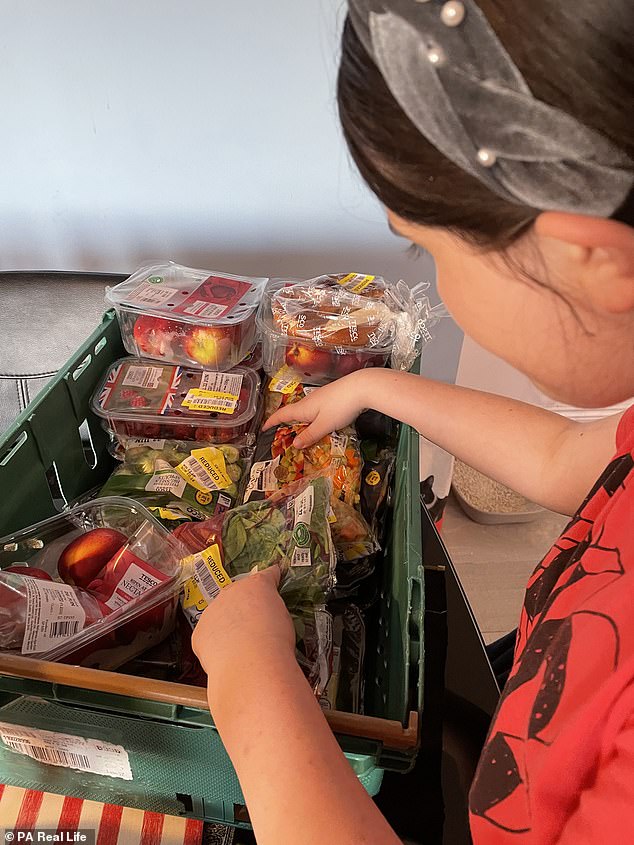 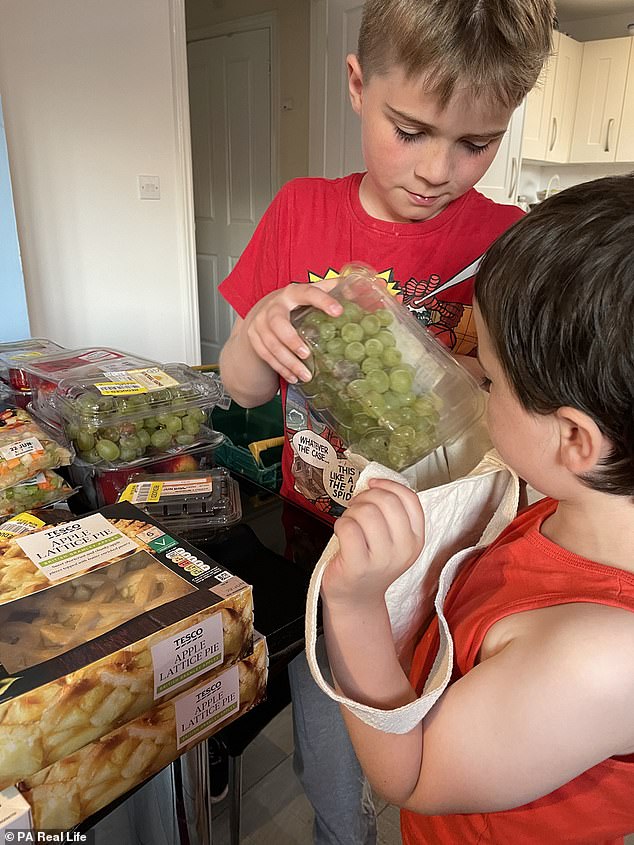 ‘I have had messages from people asking if they’ll be considered for a doughnut as they have seven children, and it’s really quite heartbreaking.

‘I have seen so many people who rely on the free food.

‘One Friday I didn’t collect any as I was at a party and the next week a woman came to me and asked me why I wasn’t there.

‘That was going to be her family’s food for the next few days.’

When Deborah first signed up to the app in November 2020 she was asked to complete a six-hour training course before she could qualify as a food waste hero – which she aced on her first attempt. 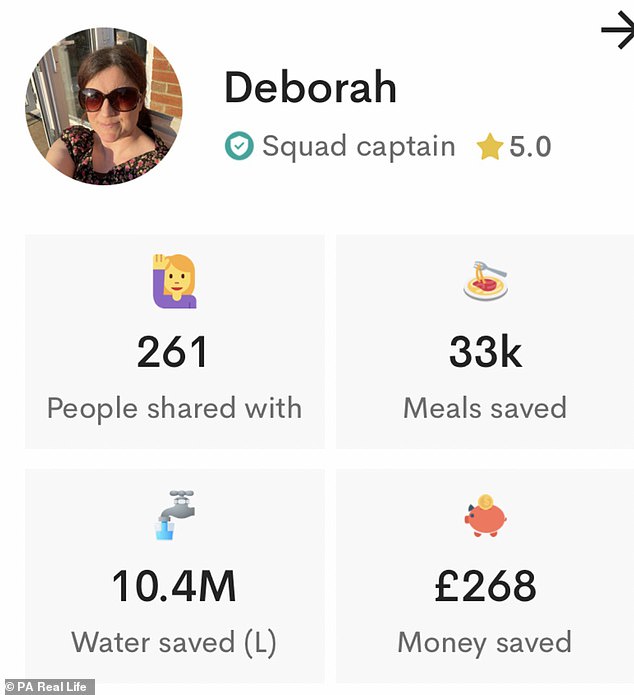 On the Olio app she has saved the equivalent of 33,000 meals and shared free food with 261 people 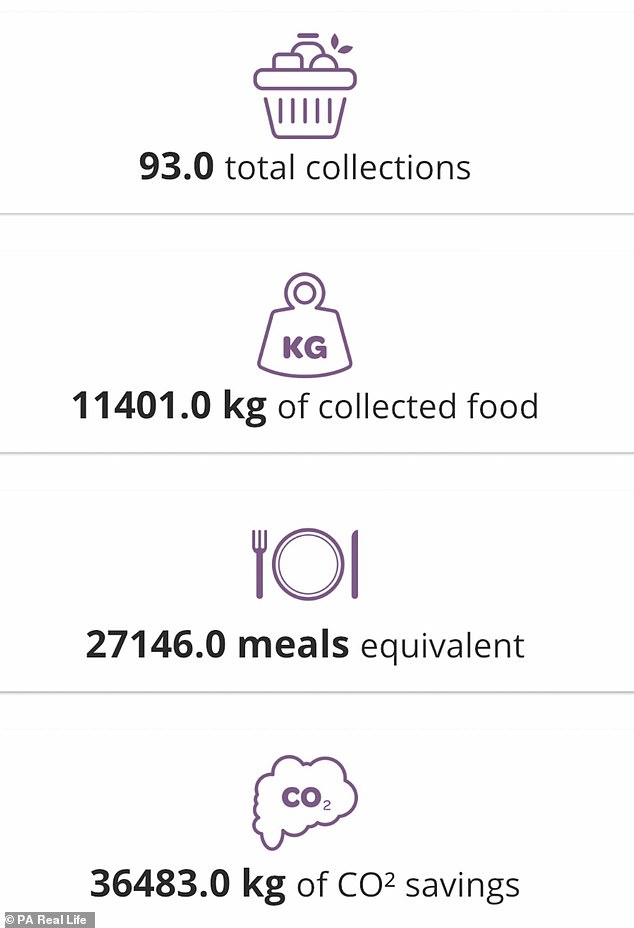 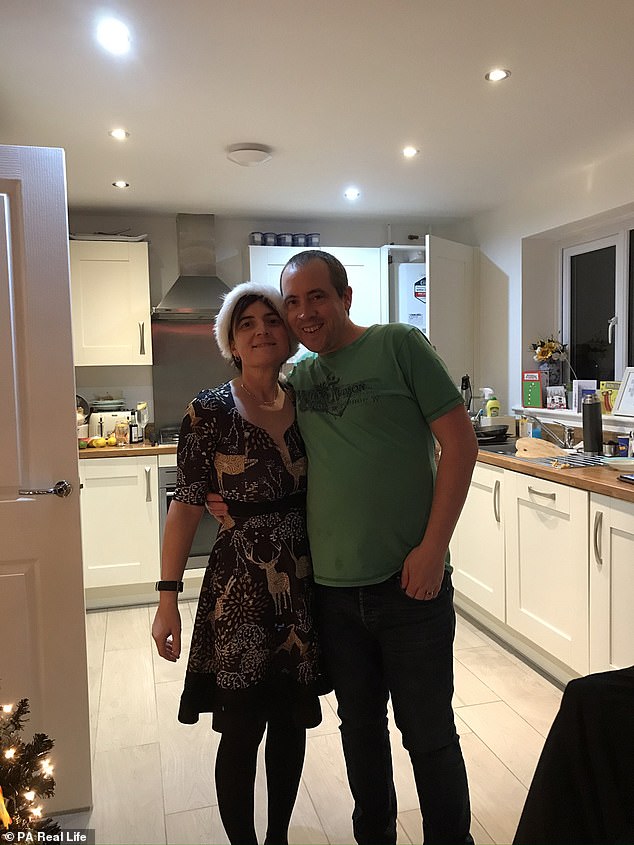 Deborah (pictured with husband James) is keen to dispel any stigma regarding food nearing its expiry date, as it is still fresh and just cheaper or, in this case, it is free

She said: ‘I was excited, as their mission is to end food waste, which felt like something I would have invented if I was business minded.’

Her first haul was a ‘baptism of fire,’ according to Deborah, as she pulled in roughly 200 items, which included sandwiches, butter, milk, yoghurt and vegetables.

Anxious about wasting the food if no one came to claim it, she knocked on 20 neighbours’ doors in her quiet cul-de-sac and, by the end of the night, a dozen had signed up.

She said: ‘It was tricky, as Olio had only just started taking off, so initially I was panicked because I had all these items.

‘I was so anxious, I went to all of my neighbours and left leaflets, as well as telling everyone in my family.

‘About 12 people joined that night and requested food, so it all went. 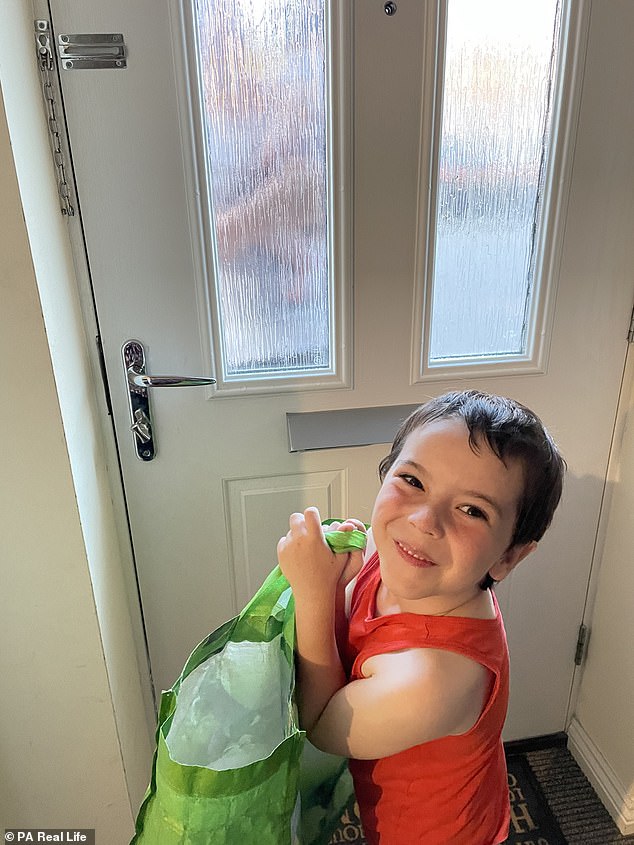 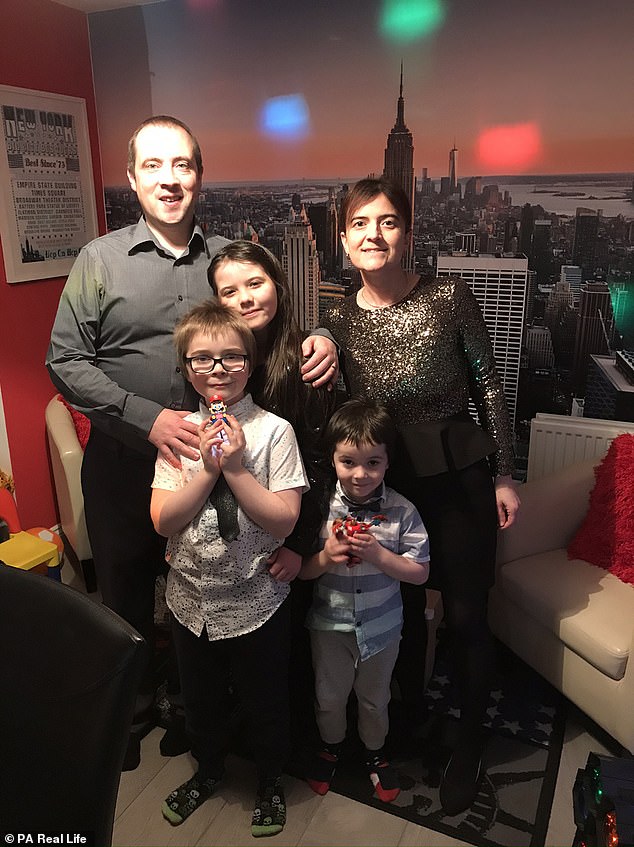 Five nights a week she heads to the supermarket at 8.30pm, collects the food, brings it home to list on the app and hands it out to punters

‘That first night was a baptism of fire, as I didn’t know what to expect.

‘It was a bit overwhelming, but it was a great learning curve.’

Plain sailing ever since, Deborah feels she has now got her role down to a fine art.

For five nights a week she heads down to the supermarket at 8.30pm to collect the food. Then she brings it home, takes photos of the products and lists them on the app.

Within an hour she has punters knocking on her door – and she enlists James and the children to help give it out.

She said: ‘I am a teacher and that’s so important, but reducing food waste is really important too. It’s my labour of love. 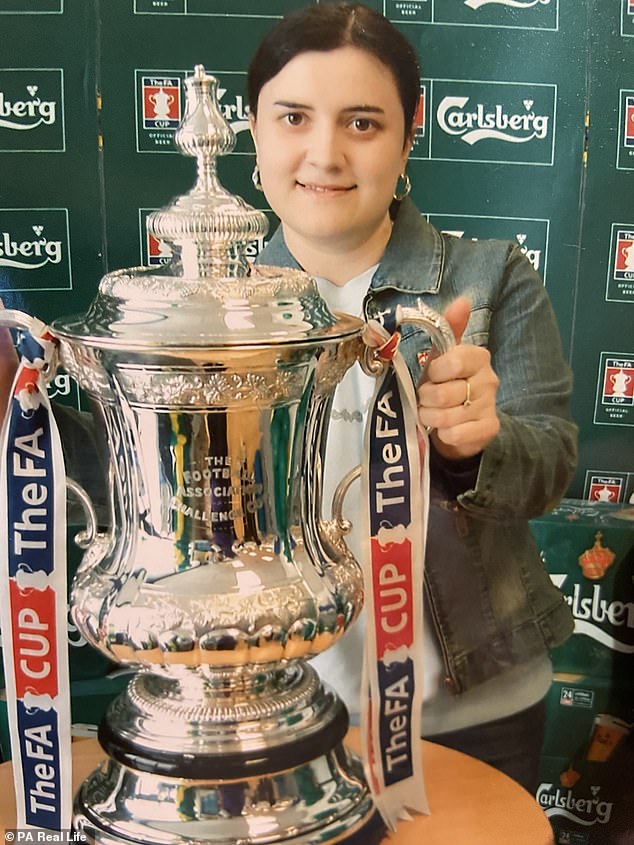 ‘I treat it really seriously, because it’s a cause that is close to my heart.

‘As soon as I did that first night I knew this was what I needed to do – and my husband could see my reignited spark.

‘He was very confused about what it was all about, but he saw how obsessed I was about it and he knew how important it was to me.’

After items are collected from the supermarket, people have until midnight to pick them up to adhere to Food Standards Agency (FSA) regulations.

Deborah is keen to dispel any stigma regarding food nearing its expiry date, as it is still fresh and just cheaper or, in this case, it is free.

She said: ‘A lot of people think that reduced section food is less good, or it will make you sick.

‘But it is still in date and it means you get to try new things.

‘I made a vegetarian mince once because it was there and it was lovely.

‘It opens up a world of opportunities.’

Deborah has saved 60,000 items from being binned so far – 33,000 through Olio a further 27,000 through her school using the FareShare app, which redistributes surplus food to charities and schools that turn it into meals. 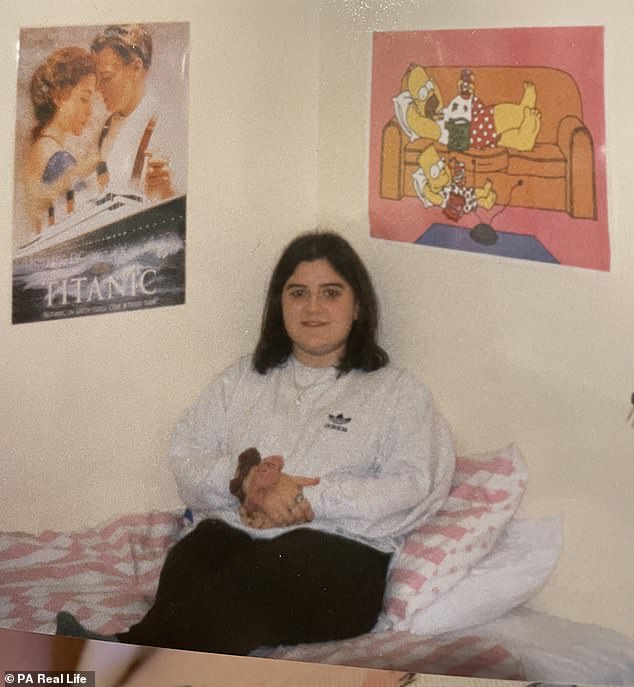 And she has no plans to stop anytime soon.

Not only does she have the satisfaction of knowing she has made a difference, she says the venture has also made her closer to her neighbours.

She said: ‘It’s become part of my social life as well, because I have made friends with so many people who are doing the same thing.

‘I have lived in a cul-de-sac for five years and never knew my neighbours.

‘Now I know exactly what kind of bread their children like. Food has brought us together.’

Another perk, according to Deborah, is that food waste heroes are allowed to take 10 per cent of the food collected on any given night – meaning she has not needed to buy bread, milk, fruit or vegetables since she became one.

She said: ‘If there are 200 items you can keep 20 and it does make an impact on the food shop, as I normally pick bread, milk, fruit and vegetables.’

Deborah now hopes to inspire more people to join the app, to help in the battle against food waste and to help other members of their community.

She said: ‘It’s a really fantastic way to help the planet and help others.’ 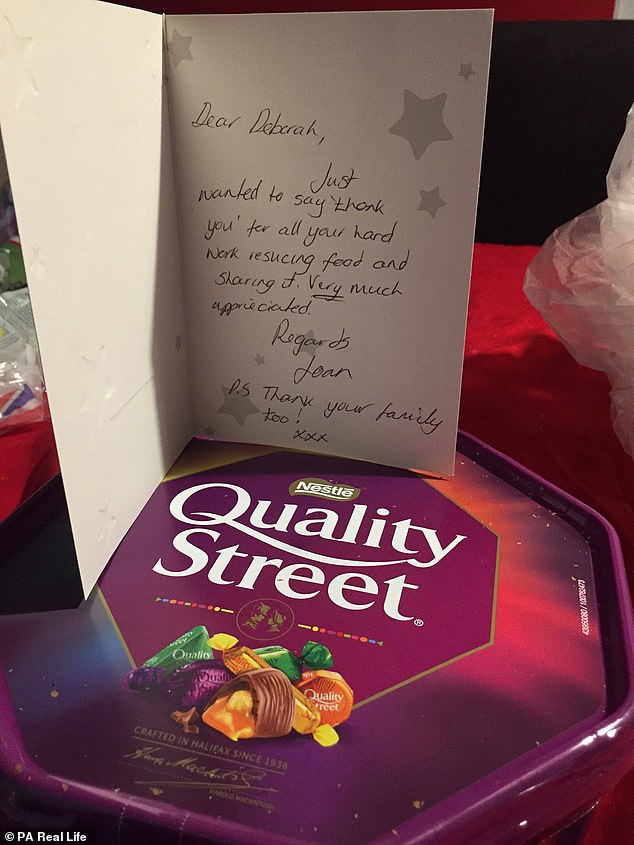 Sweet: A happy customer even sent Deborah a card thanking her for her work with a box of chocolates