Hollywood's biggest stars stepped out on Sunday at the Dolby Theatre in Hollywood, California, for the 92nd Academy Awards.

As with previous years, the night was filled with iconic fashion moments. Celebrities walked the red carpet in glamorous gowns and suits, wearing some of 2020's biggest trends so far.

From Regina King to Brie Larson, these were the best-dressed stars at the 2020 Oscars.

Regina King was pretty in pink at the 2020 Oscars. 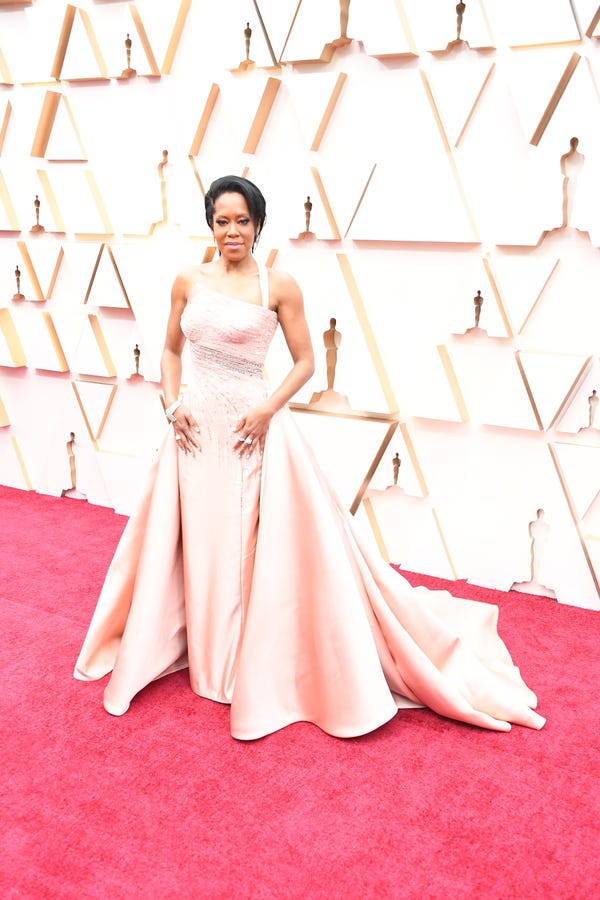 Her Versace dress had an asymmetrical neckline and crystal-covered bodice. Her skirt, on the other hand, featured a second layer of fabric wrapped around the waist. King completed the look with $500,000 worth of Harry Winston jewelry, and Stuart Weitzman shoes.

Billy Porter stood out in a gold-and-orange couture ensemble designed by Giles Deacon. 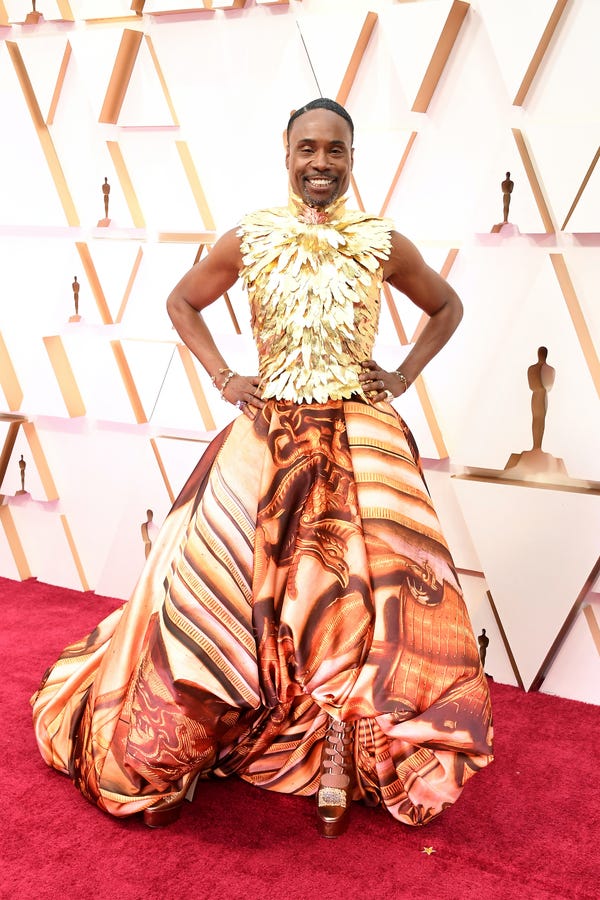 His sleeveless top, which had a high neckline, was made from 24-carat gold feathers. His painting-inspired skirt, on the other hand, bubbled around his ankles to reveal Jimmy Choo platform boots. 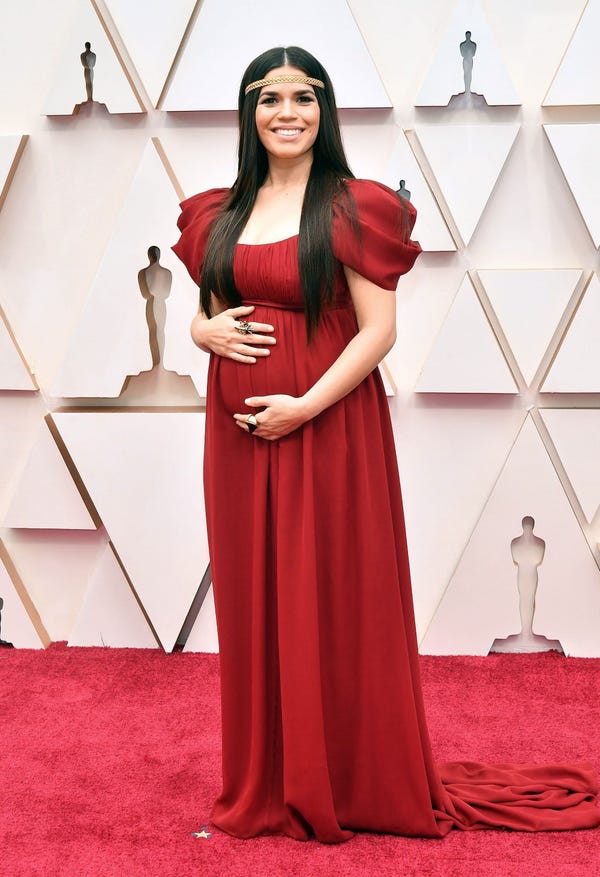 Her red gown had bow-style sleeves, a ruched bodice, and skirt that extended into a short train. Ferrera completed the look with a gold headband wrapped around her forehead.

Zazie Beetz dazzled in a two-piece look from Thom Browne. 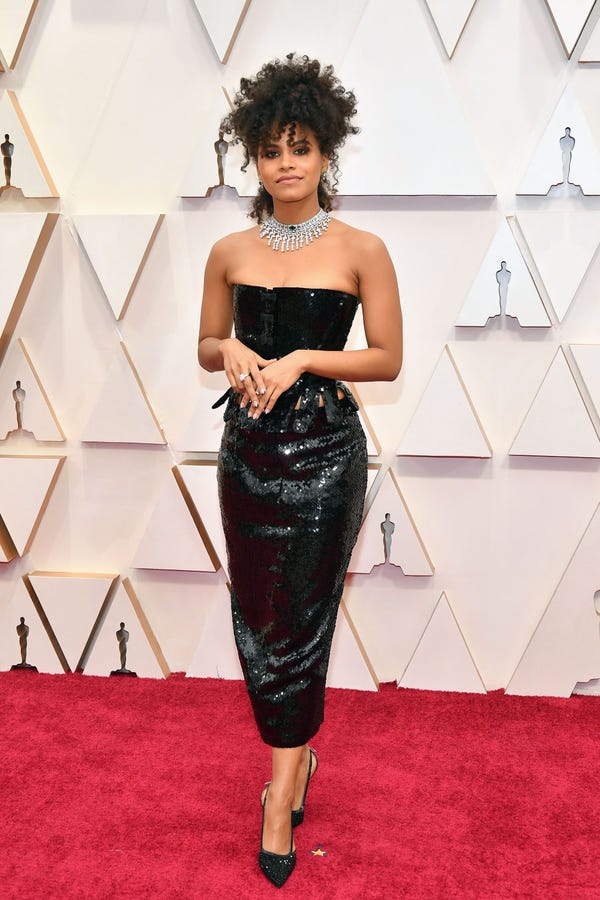 Both her top and her skirt were covered in black sparkles. Her Bvlgari jewelry was also stunning. 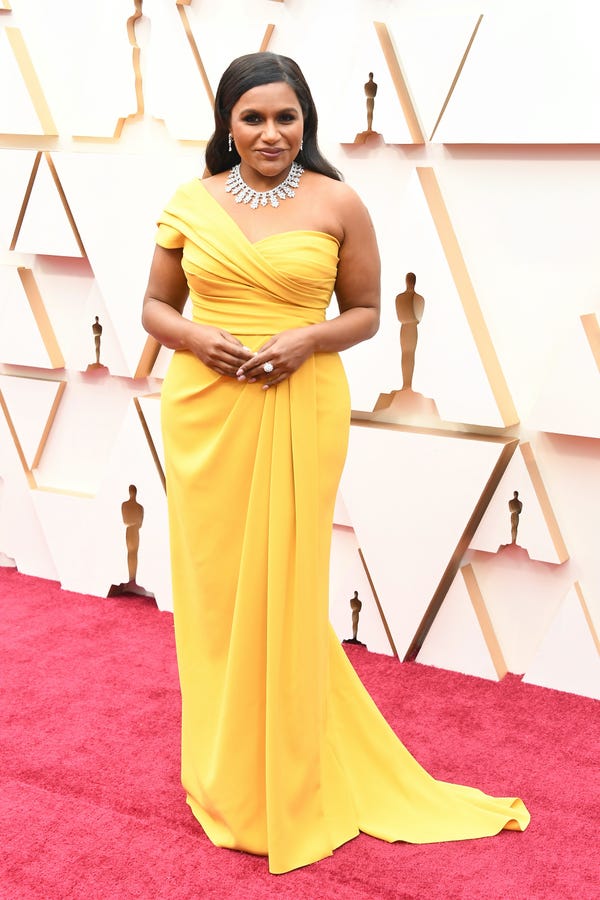 Her yellow dress featured a single sleeve and short train. She also wore a diamond necklace, dangling earrings, and giant ring from Chopard.

Kaitlyn Dever sparkled in a red gown made by Louis Vuitton. 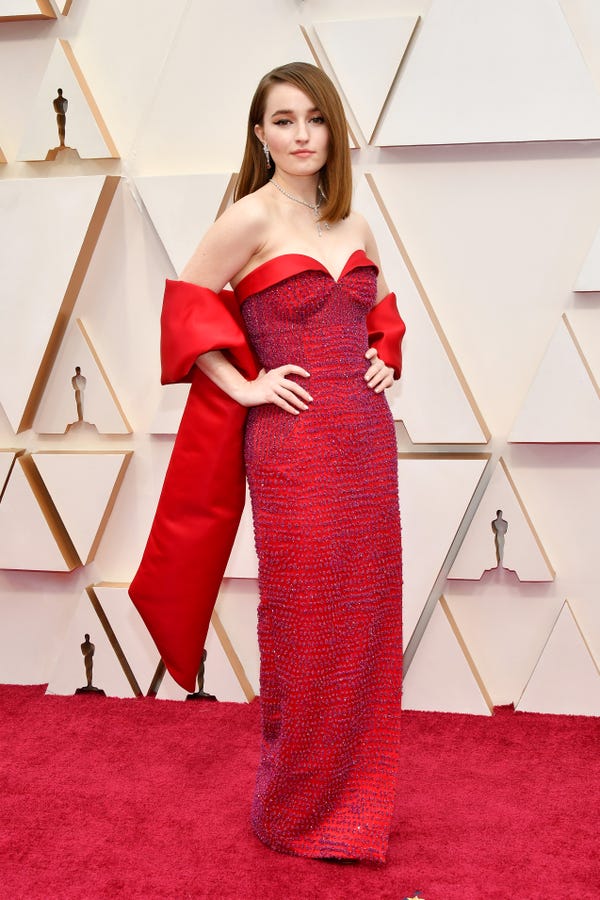 The sustainable dress was strapless and covered in silver sparkles. She also wore diamond jewelry and a satin scarf around her arms. 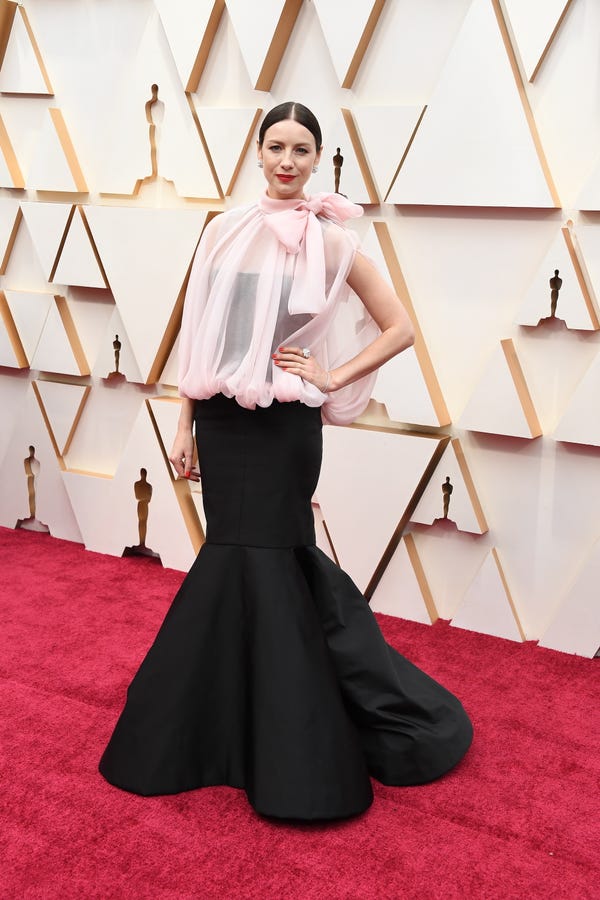 Her black, mermaid-style dress was strapless and covered with a sheer pink overlay. The outer piece had a high neckline, with a bow placed right against her neck.

Janelle Monáe dazzled in a silver gown with a hood custom-made for her by Ralph Lauren. 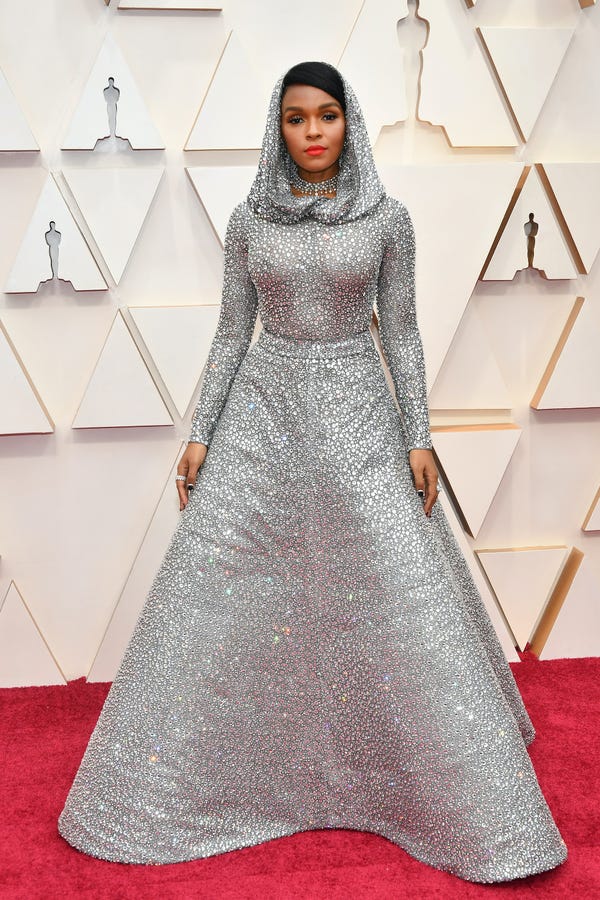 The long-sleeved dress, which also had a full skirt, took 600 hours to make. She paired it with a sparkling ring and red lipstick. 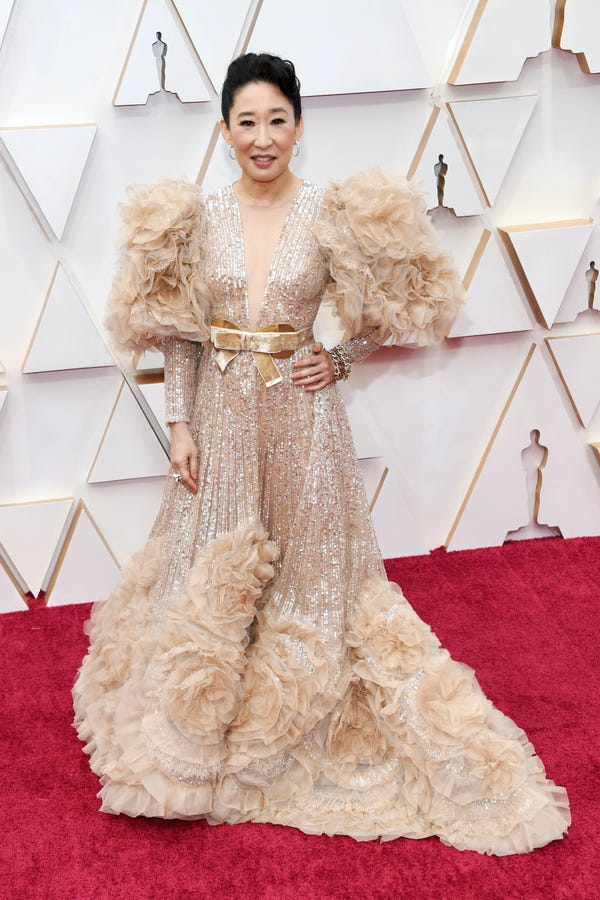 Her long-sleeved gown, designed by Elie Saab, featured a plunging neckline and giant ruffles attached to each sleeve. Ruffles were also present across the bottom of her skirt. 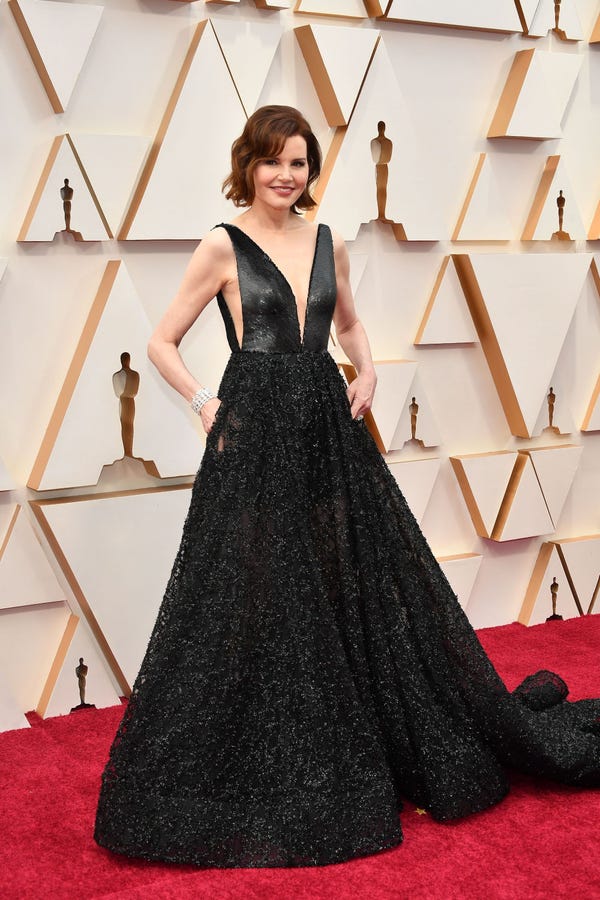 Not only was her Romona Keveza dress covered in sparkles, but its skirt, which had pockets, was also semi-sheer.

Natalie Portman's Dior look was both glamorous and thought-provoking. 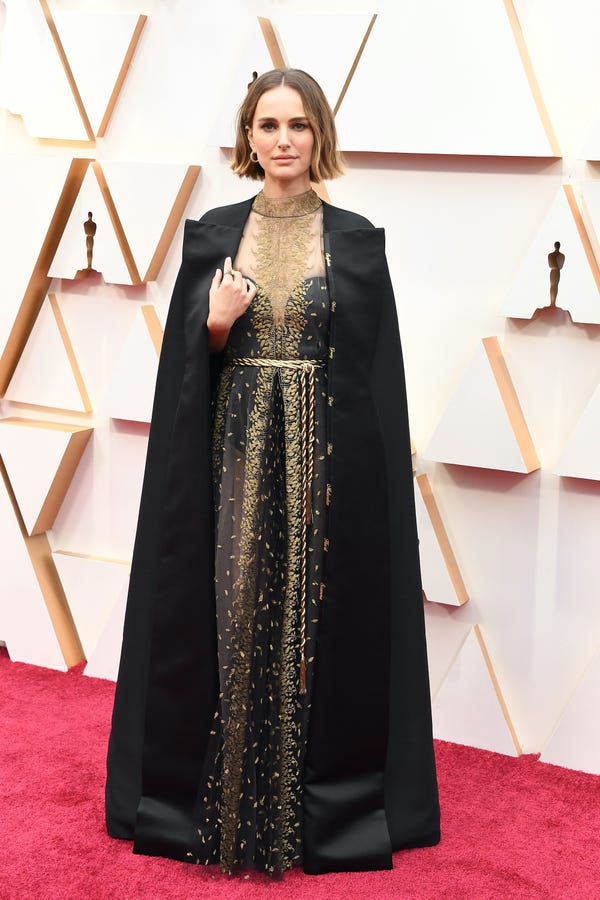 She wore a black strapless gown underneath a sheer overlay with gold embroidery. Portman also donned a black cape that featured the names of female directors snubbed by the Oscars.

Brie Larson lit up the red carpet in a sparkling Celine dress with a plunging neckline. 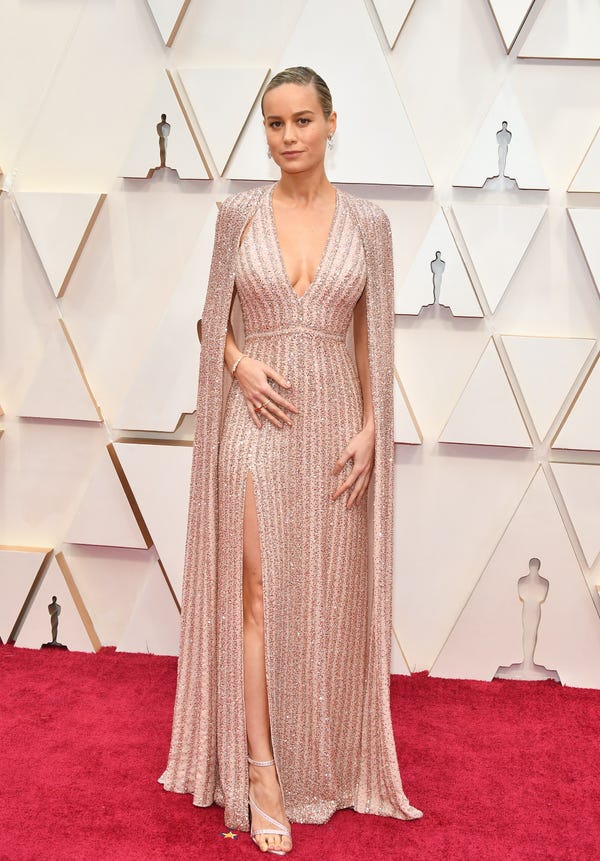 The dress also had a thigh-high slit and an attached cape. She completed the look with strappy sandals and an updo hairstyle. 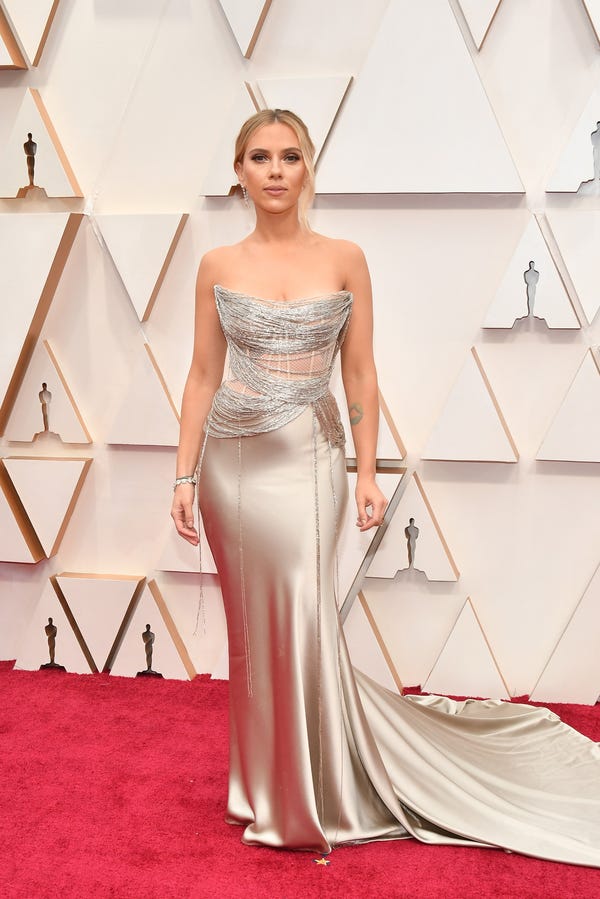 She completed the look with smokey eye makeup and an updo hairstyle.

Rebel Wilson resembled a golden award in her sparkling dress. 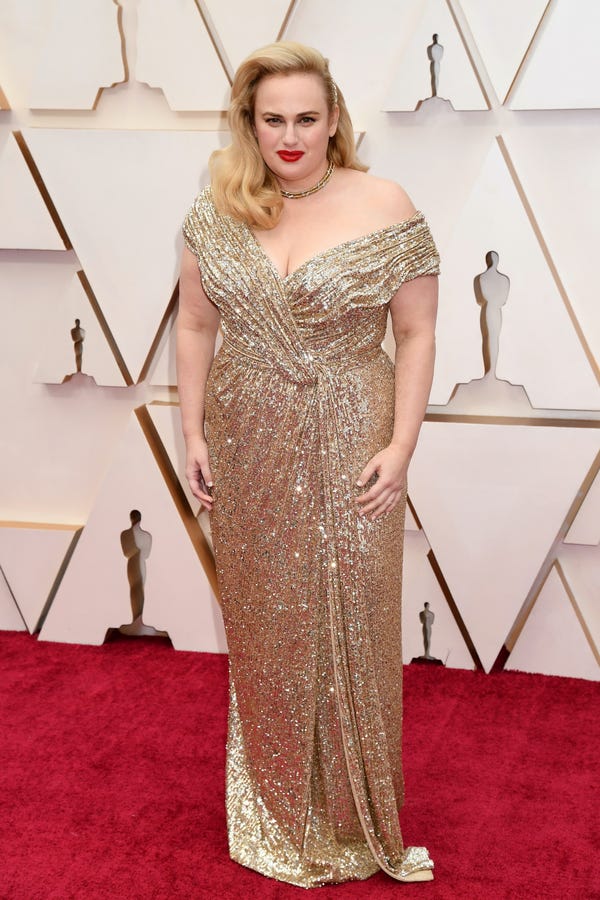