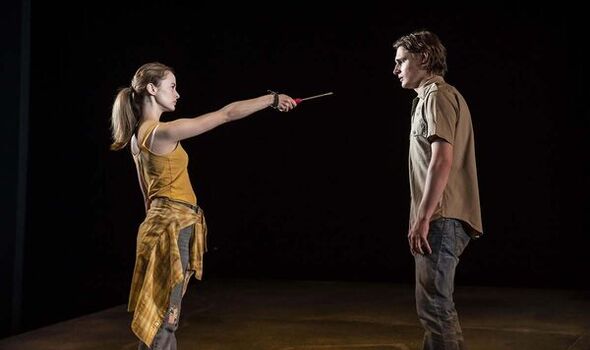 His two friends and protectors are rich kid Hoke and his easygoing pal Frayn. With Jude’s reluctant agreement the three boys decide to use the basement as a meeting place where they can seal their friendship by sacrificing something they love in imitation of a frat house initiation.

Being poor, Acton’s choices are limited and he makes a decision that has fatal consequences. US dramatist Naomi Wallace’s play is a dangerous enterprise.

Switching back and forth between 1977 and 1991 it toys with the social fallout of the Vietnam War and the unruly hormones of teenage boys.

Jude is the catalyst for their actions leading to a moment of shameful horror that is all the worse for being described rather than depicted.

As the surviving three meet up in the basement 14 years later, hidden “truths” are exposed only to reveal another set of truths beneath in a kind of moral palimpsest.

Insidiously uncomfortable, Wallis’s play is directed with conspicuous minimalism by Sarah Frankcome that deliberately sucks the drama out of the action, allowing the language to do most of the work.

Shannon Tarbet’s 17-year-old Jude is the fierce heart of the 1977 sequences – “I’m surrounded by slurping, perverted virgins” – which makes her moments of naked vulnerability all the more moving.

Her 1991 self (Jasmine Blackborow) is more sanguine and detached.

Among the boys, Douggie McMeekin brings a hulking pathos to the older Frayne and Stanley Morgan’s Acton is nervously conflicted.

The betrayal of sibling loyalty and the sacrifices young people can make for love are played out like a minor string quartet; the full impact of it doesn’t really hit you until it is over.