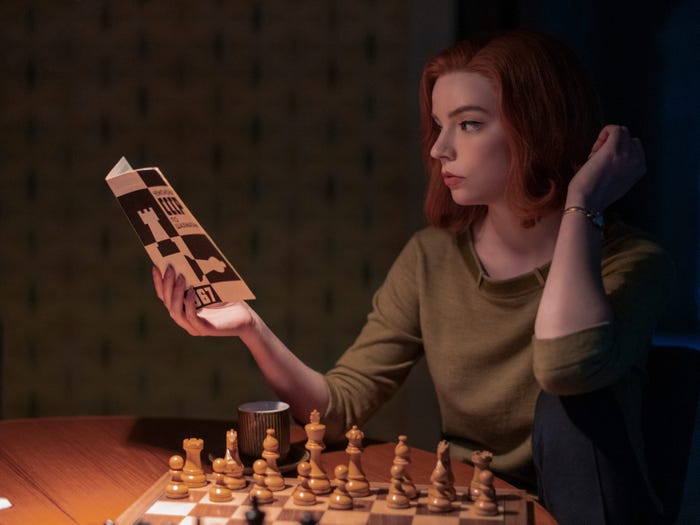 A runaway hit, Netflix's new miniseries follows the fictional life of Kentucky orphan and chess prodigy Beth Harmon, played by actress Anya Taylor-Joy, on her journey to becoming a World Chess Champion in the 1960s.

Since its release on October 23, "The Queen's Gambit" has inspired a surge of interest in chess around the globe. Google searches for "how to play chess" were at their highest in nine years and chess set sales skyrocketed.

Surprisingly, while the game of chess has been around for over a thousand years, the rules as we know them in the US today weren't standardized until the early 20th century.

From the development of the "queen" chess piece to the banning of the game by the Catholic Church, here is a brief and surprising history of chess.

Though the precise origins of chess are debated, a widely accepted theory is that the chess game we play today originated in India around 1,400 years ago. The game was originally called "chaturanga," a Sanskrit word meaning four arms, or four dimensions.

The four dimensions "refer to the elephants, horses, chariots, and foot soldiers of the Indian army," linguistics professor Edwin Battistella wrote for the Oxford University Press in 2017.

By 600 AD, the game of chaturanga evolved into the Persian game chatrang, which is considered "the first true version of what we now call chess," David Shenk writes in his 2006 book "The Immortal Game: A History of Chess."

Chatrang was a two-player game involving 32 pieces on a 64-square board, according to Shenk. Each player had an army of 16 pieces that included a king, minister, two elephants, two horses, two chariots, and eight foot soldiers.

Like modern-day chess, chatrang ended when one player placed the other player's king under attack, Battistella said, though the exact rules remain unknown.

Today's international standard chessboard, defined by the International Chess Federation, has the same layout and number of pieces as chatrang, though the pieces have changed over time.

From Persia, the game likely spread across the Silk Road trade route, H.J.R. Murray wrote in his authoritative "History of Chess."

This led to over 2,000 variations of the game that are still played today, including versions of Chinese chess (xiangqi) and Japanese chess (shogi).

Though evidence exists tying Chinese and Japanese variations of the game to chaturanga, some scholars contend that Chinese chess originated independently and that Japanese chess is derived from the Chinese version.

When chess arrived in Europe around the 11th century, nobles, royalty, and knights were quick to adopt the game. Clergymen got in on the action, too.

However, associations with gambling and idleness resulted in attempts by some church leaders and those in power to try to ban the game.

In 1061, Cardinal Damiani of Ostia, Italy, prohibited his clergy from playing the game, calling it one of life's "disgraceful frivolities" in a letter to the Pope. Later in 1254, King Louis IX, the only king to be canonized by the Catholic Church, attempted to ban the game throughout France, but lost out to the game's popularity.

The queen piece, today the most powerful piece on the board, became a widespread replacement to the king's minister in the 15th century, something Shenk attributes to the emergence of "charismatic and powerful queens" like Elizabeth I of England, Isabella I of Castile, and Mary Queen of Scots.

Founding father Benjamin Franklin was an avid chess player and "fortuitously trumpeted" the game stateside, according to the United States Chess Trust.

Franklin also reportedly enjoyed playing in the company of ladies. "Franklin himself was known to while many hours away on chess, especially against beautiful women," the US Chess Trust writes on its website.

In 1786, Franklin published the essay "The Morals of Chess," in which he praises the game's ability to strengthen players' social and intellectual skills.

The rules of chess weren't codified until over a century later when the International Chess Federation emerged in Paris in 1924.

Just like in "The Queen's Gambit," there was an international rivalry in the chess world between the United States and the Soviet Union.

In August 1972, eight-time US chess champion Bobby Fischer faced off against Russian player and reigning World Chess Champion Boris Spassky in what become known as the "Match of the Century."

Its significance beyond the chess world became evident when National Security Adviser Henry Kissinger called Fischer to persuade him to continue the match, Dominic Lawson, president of the English Chess Federation, wrote for BBC magazine in 2015.

"That 1972 match in Reykjavik highlighted as nothing else the role of chess in a different sort of conflict —  the Cold War. For the Soviet Union, supremacy at the chess board was a demonstration — as its rulers saw it — of the superiority of their socialist system over the Western capitalist one," Lawson said.

Fischer won, but the fame and press attention that followed led the famously eccentric player to withdraw into a "weird, contrarian solitude he maintained more or less for the rest of his life," the New York Times reported upon his death in 2008.

Fischer died in Iceland, where he was offered asylum in 2004 after violating international sanctions to play a chess match in Yugoslavia.

On May 11, 1997, the IBM supercomputer named Deep Blue became the first machine to defeat a human chess player.

Deep Blue's opponent was the Russian chess player and reigning world champion Garry Kasparov, who up until that point had never lost a game in his life, the Washington Examiner reported at the time.

The match prompted a flurry of headlines such as "Box defeats World Chess Champion" and "Box defeats Best Player of All Time," according to the Washington Examiner.

The game, and the emergence of chess computers, marked a turning point in chess history. Computer v. computer chess leagues now exist, and chess software has given human players the opportunity to improve their game.

"Players can now consult databases of millions of games to identify errors in their own play," MasterClass writes on its introduction to a course taught by Kasparov. "This has also allowed players to discover brilliant new moves (called 'novelties') that have never been played before."