Overseas travel has surged over the holidays and the travel industry expects international holidays to rebound to pre-COVID levels by the middle of the year.

There were more than 1.5 million flights out of the country in December, preliminary Australian Bureau of Statistics data shows. That’s up from nearly 1.2 million departures in November, but still about two-thirds of the December 2019 travel peak of 2.24 million before the pandemic. 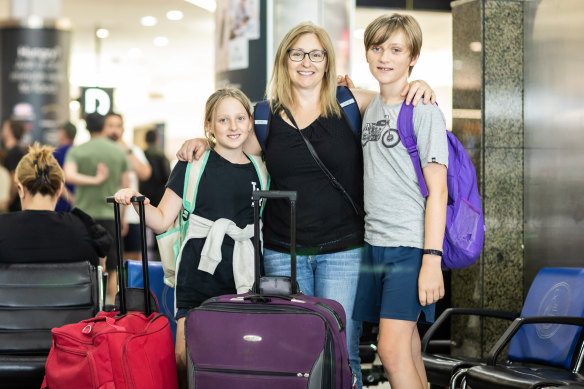 Rochelle Power and her children Parker and Lily Crabb were headed to Bali for a holiday.Credit:Scott McNaughton

Flight Centre chief executive Graham Turner said there was huge pent-up demand for overseas travel, particularly to the US and Europe, but pricey airfares and a shortage of seats has so far kept a lid on travel numbers.

“People can’t find seats, we’re still only back to 70 per cent of our pre-COVID capacity outbound,” he said.

More than half of the 1.2 million departures last November (665,000) were Australian residents heading overseas for holidays. Another 22,500 departures were leaving long-term. The rest were international travellers. The breakdown of numbers for December travel has not yet been made available.

While demand for trips to Asian countries was still well behind pre-pandemic demand, Turner said Fiji and Bali remain among the top holiday destinations for Australians.

Rochelle Power and her children Parker, 12, and Lily, 10, are among those heading to Bali for a break.

“We were all really looking forward to going on a holiday, somewhere different that we haven’t been able to travel to for a while,” Power said.

“It’s like a well-deserved treat that we’re giving ourselves after homeschooling and being locked down. Melbourne was one of the worst places [for lockdowns], we just want to get out and enjoy life.”

“More Aussies travelling abroad is positive for travel companies and transport operators such as airlines and taxis. But if more people elect to spend money overseas, that leaves less money to spend at home,” he said.

International airfares remain well above pre-pandemic levels, due to higher fuel costs and airline attempts to recoup losses from the pandemic.

But Turner said prices are now falling – from highs of $5000 for some economy flights last year to $2500 to $3000 for Europe or the east coast of the US. Crucially, airlines are also ramping up the number of services, particularly as major Asian destinations open up.

“All we need is more capacity and cheaper airfares, and we’ll be back from what we’re seeing to pre-COVID travel, within the next three or four months,” Turner said. 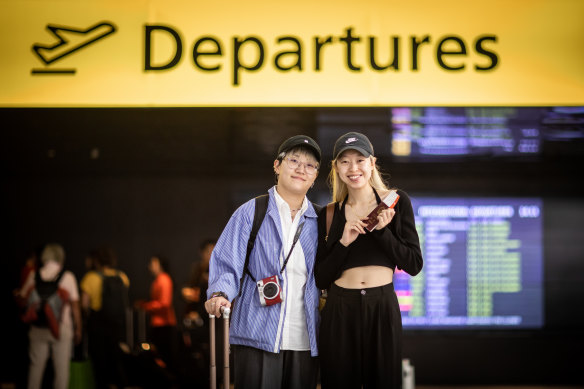 Yuyao Tan and Yutong Jiang are off to Thailand for Lunar New Year and their anniversary.Credit:Sott McNaughton

Melburnians Yutong Jiang and Yuyao Tan chose Thailand for their first overseas trip since the pandemic because it was cheap. The pair were heading to Bangkok on Tuesday afternoon to celebrate the Chinese New Year and the two-year anniversary of their relationship.

Jiang said she was looking forward to leaving Australia for the first time in after almost three years, but was worried about leaving her puppy behind for 10 days.

“It’s been almost three years since we went flying to another place so it’s like an experience for both of us,” Jiang said.

“I’m getting more excited coming to the airport and seeing everybody is ready for their trip.”

Cut through the noise of federal politics with news, views and expert analysis from Jacqueline Maley. Subscribers can sign up to our weekly Inside Politics newsletter here.