Labor leader Anthony Albanese made a series of political gains when winter arrived this year and was able to build the party’s core support to the point where he had a winning edge over Prime Minister Scott Morrison.

The Labor primary vote rose from 33 per cent in April to 35 per cent in May and 36 per cent in June as Australians waited for vaccines to arrive while coronavirus case numbers grew and lockdowns came into force in Sydney and Melbourne. 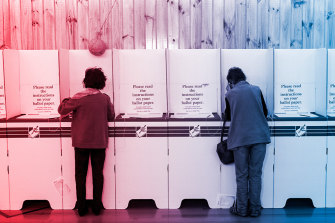 Polls and political research capture a moment in time. They do not predict election outcomes.

This was a winter of discontent for Morrison. The Prime Minister enjoyed very strong approval ratings in May, thanks in part to $74.6 billion in outlays in the budget that month, but his net performance rating tumbled from 15 points in May to 8 point in June.

Morrison’s net rating went negative in July. It fell to minus 1 point that month and stayed there in August. Those who rated his performance as poor suddenly outnumbered, just, those who thought he was doing a good job.

Those twin trends have stopped. The latest Resolve Political Monitor shows Labor has lost those gains, with its primary vote falling from 32 per cent in August to 31 per cent this month. It shows Morrison has recovered some of his personal support, with a net performance rating of 4 points, positive once again.

Most of the changes in the September survey are small. The survey of 1,606 voters has a margin of error of 2.5 per cent, which means a change of one percentage point is not a trend. But the results tend to confirm the setback for Labor that began in August and continued in September.

Morrison has no reason to be complacent. A net performance rating of 4 per cent is not a ringing endorsement from voters, even if he holds a clear lead over Albanese as preferred prime minister, 45 to 26 per cent.

This is the sixth Resolve Political Monitor since The Sydney Morning Herald and The Age began the new survey in April in order to bring more competition to political polling. The story of those six surveys is about Labor gaining and then losing ground, based on the same methodology each month.

One of the most important Resolve findings, the Labor primary vote of 31 per cent, is lower than some other surveys. This week’s Newspoll, for instance, estimated the Labor primary vote to be 38 per cent. The Roy Morgan poll had Labor on 35 per cent last week. The most recent Essential Research result on primary vote was several months ago, making it difficult to compare.

Many Labor supporters are sure their primary vote is closer to 38 than 31 but they have been too sure about their success before. They have won the opinion polls and lost the elections.

The Resolve survey uses a different methodology to others. There is no “undecided” category because Resolve asks voters to nominate their primary votes in the same way they fill in their ballot papers for the lower house at an election.

This means the final Resolve tables do not exclude the “uncommitted” group, which can be about 8 per cent of all respondents. There is no “uncommitted” cohort. Respondents have to choose an option.

This may also explain another feature of the Resolve findings. Support for minor parties and other candidates is 30 per cent in the latest survey. This includes the Greens, Pauline Hanson’s One Nation, independents and others.

It also includes 3 per cent support for the United Australia Party, run by mining magnate Clive Palmer. This is the first time Resolve has put the UAP to respondents by name as an option for their primary vote.

Other surveys have slightly lower figures for the minor parties, independents and others. This group was about 25 per cent in last week’s Roy Morgan poll and this week’s Newspoll.

One other big difference with the Resolve surveys in The Sydney Morning Herald and The Age is the decision to report primary vote rather than simplify the outcomes into a two-party preferred result after calculating preferences.

The six Resolve surveys so far this year suggest Labor and the Coalition are close in two-party terms. They are so close, in fact, that it can be misleading to suggest one side is “winning” a poll. The outcomes have been tight in each survey, within the margin of error of 2.5 percentage points.

Political polls only capture a moment in time. The latest Resolve survey does not predict the next election. What it shows, however, is that Labor has been unable to maintain the gains it made in the first months of winter.