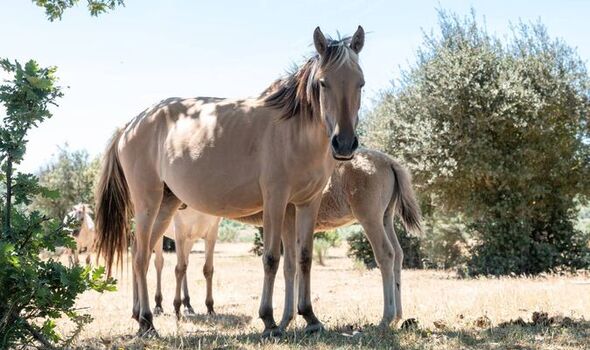 We spotted a herd of Sorraia horses sheltering from the harshness of the May sun and chewing on dried undergrowth despite our constant gazes.

The calm and captivating horses were released in Vale Carapito last year in a bid to increase natural grazing, reduce wildfire risk and boost nature-based tourism.

Plummeting grazing livestock numbers and land abandonment in the Greater Coa Valley has led to the expansion of forests and dense scrub.

This, coupled with the close plantation of pine and eucalyptus trees, has left the dry landscape susceptible to deadly wildfires.

The current frequency and intensity of these blazes has caused severe environmental degradation, economic losses and threatened human life.

Rewilding Portugal, a non-profit organisation started in 2019, is on a mission to restore and protect landscapes in the region.

“The interaction of grazers with the land is vital so fire has much less chance of progression.

“Large grazers are key to managing the landscape by avoiding the dispersion of shrubs. Fire is a big concern for us. For the ecosystem to be resilient, it needs large grazers.”

The success of the horses’ reintroduction became clear when we were shown a 65x65ft fenced area that keeps the grazers out and acts as an experimental “control”.

The dark, dense grasses and dry woodland habitat that dominate the enclosed plot are a far cry from the thriving biodiversity that exists outside it.

Dazzling butterflies, busy beetles and fragrant flowers are dotted across the open space where the Sorraia roam freely across 60 hectares.

The return of wild and semi-wild herbivores will help the Rewilding Portugal team strengthen a 120,000-hectare ecological corridor between the Douro region in the north and the Malcata area in the south.

In another part of the Côa Valley, nature’s jumbo jets circled the cloudless sky above the steep cliffs until it was clear for landing.

A chestnut-coloured griffon vulture, with its nine foot wingspan on full display, swooped onto boulders with heaps of butchers’ offcuts dumped just 32ft from our wooden hide.

With its curved beak and featherless neck, the scavenger tucked into the bones on offer as an endless stream of raptors descended from the bright azure sky.

The 40 griffons let out high pitched shrieks, grunts and harsh cackling sounds as the bully birds tussled for the meat.

Griffons galloped across the terrain while Egyptian vultures, kites, Iberian magpies and ravens darted before our eyes.

These cliff-loving birds are playing a critical role in the stability of ecosystems and food webs, and ensuring the successful take off of rewilding in the region.

Prata said: “Besides supporting the expansion to their historical range and numbers, it’s also about completeness of the trophic chain. Herbivores take up the biomass, they grow, they’re predated, and the carcasses are our left which feed vultures who are left to clean up. It’s the whole cycle of nutrients.”

The artificial feeding by Wildlife Portugal, which takes place twice a week at random times, has helped significantly increase the number of vultures in the area.

The Iberian Peninsula is one of the world’s strongholds of the Egyptian Vulture, and it is imperative to tackle threats this species faces.

The Egyptian Vulture population numbers have stabilised in recent years while the numbers of griffon and black vultures have risen.

But poison associated with certain hunting and livestock practices remains a danger, alongside the menacing risk of fires.

Birds are not the only animals front of mind for the dedicated Rewilding Portugal team. They are on a mission to support the elusive Iberian wolf’s return to specific areas within the country.

Our binoculars scope the dramatic expanse of Montesinho Natural Park looking for the reddish brown chief predator that is known to roam the land.

Although we never spotted them, they made their presence known by paw imprints left on a rugged trail, and fresh scat.

This landscape is abundant with their natural prey, such as roe deer, which we found quietly walking through the green hills.

But in the Coa Valley where fragmented wolf packs still trot, a lack of prey means they have little choice but to hunt livestock.

This has led to conflict with farmers, and the animals’ persecution.

Rewilding Portugal said that as numbers of this keystone species increase, so “balance will be restored” to the ecosystem.

“This will have a positive impact on wildlife at all levels of the food chain”, the team said.

Wrecking habitats and mistreating wildlife helps viruses like the one behind Covid-19 to leap more easily to humans.

Loss of nature is loss of our life support system. As Sir David Attenborough said: “We are dependent on the natural world for every breath of air we take and every mouthful of food we eat.”

Britain is one of the world’s poorest countries for nature quality.

The reasons include agricultural intensification, pollution and deforestation. Over half our species are declining. One-in-seven are crashing towards extinction.

But there is hope. That’s where rewilding comes in. Rewilding is large-scale restoration of nature until it can take care of itself.

It’s about reinstating natural processes and, where it makes sense, reintroducing native species.

This can halt and reverse collapses in biodiversity. Because healthy habitats soak up carbon dioxide, rewilding – alongside reducing fossil fuel use – can be a solution to climate breakdown.

So Rewilding Britain wants to see major nature recovery across at least 30 per cent of Britain’s land and sea by 2030.

Of this, five per cent – around one million hectares – would see the rewilding of peatlands, native forests, grasslands, rivers, and coastal areas.

The other 25 per cent would be a mix of nature recovery areas – from nature reserves to opportunities for farmers on marginal land.

If we pull together, a nature-rich Britain is possible. Our Rewilding Network is bringing together communities, landowners, farmers, charities and local authorities from across Britain.

Launched last year, the Network already includes over 200 large projects – together covering almost 168,000 hectares of land and over 300 square kilometres of sea.

Another 700 smaller members cover another 6,000 hectares.

A visit to the network pages on our website is a tour of hope. Habitats are recovering. People are getting involved and making a difference.

A study of 43 of large sites shows that since rewilding began, jobs have increased by 65 per cent.

Landowners and managers can help by joining the Rewilding Network. We can all make a difference by asking councils not to over-mow or spray green spaces, and by making community areas and gardens wilder.

Rewilding is an opportunity to give nature – including us – a fighting chance.