Sometimes, in fact, often, enough is enough. We had 10 sparkling seasons of Friends (1994-2004). It was a triumph of writing, direction, casting and chemistry during a golden period for multi-camera, studio-based American sitcoms including Frasier, Home Improvement, Roseanne and Everybody Loves Raymond. After a decade, it bowed out in style, exiting on a high and, in the best showbiz tradition, leaving us wanting more. 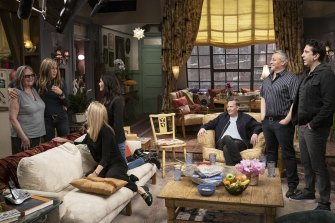 Cast and crew during the filming of Friends: The Reunion.Credit:Warner Bros

In recent years, the show’s popularity has soared thanks to its availability on streaming services. A new generation has discovered its delights and former fans have reacquainted themselves with its considerable charms. And it’s aged relatively well. The comedy is still an oasis of positivity, bright and snappy, brimming with warmth and wit. No wonder people are flocking to it (on Netflix, Binge and Foxtel Now, with selected seasons on 10Play).

But it’s a good thing the cast and producers resisted what must be considerable pressure to get the band back together and do an encore. Instead, they came together for an eagerly-anticipated reunion special (Binge) in which the cast gathered amid a golden glow of nostalgia, reminiscing about the good times with hugs, laughter and tears. They wandered through their old set and sat on the couch that featured in the opening credits alongside the show’s hit theme song.

Good on ’em. Because the show was such a sustained success and continues to give people pleasure, there’s been a persistent hope for the kind of reunion that would revisit the characters: uptight Monica (Courteney Cox), chattering Chandler (Matthew Perry), daffy Phoebe (Lisa Kudrow), dopey Joey (Matt LeBlanc), sweetly sly Ross (David Schwimmer) and delightfully self-absorbed Rachel (Jennifer Aniston).

Friends isn’t a comedy built around a nuclear family or a workplace. Specific to a time and place, it features six 20-somethings, living in New York, sharing apartments, romantic trials and career challenges.

The cast members, who were executive producers on the Reunion special, decided not to revive those characters 20 years on. What a relief. I don’t want to see Monica fretting about menopause and struggling to micro-manage surly teenagers. Or Ross as a goofy grandpa, or Phoebe warbling Smelly Cat to mystified millennials. Or, as LeBlanc suggested in the special, Joey running a sandwich shop in Venice Beach.

Friends was great while it lasted and a testament to how good it was is that it continues to draw enthusiastic viewers. So why try to catch lightning in a bottle again? Why risk tarnishing the legacy with a regrettable epilogue?

Kudos to the show’s savvy cast for resisting the pressure to reboot their classic comedy. This group has long been smart and productively united. Their musketeer-like bonding and sense of being together in this adventure arguably super-charged the series, and it was also evident from their contract negotiations at the end of the third season, after the show had become a hit for NBC. When they decided they deserved a larger share of the lucrative pie, they negotiated as a group, understanding strength in unity.

A network reluctant to fork out more or to set a precedent that others might follow was effectively nobbled. Cast members singled out as troublesome couldn’t be picked off and replaced. It was all or nothing and no one in their right mind would kill off a hit show: they’re too hard to make. After eight seasons, the collective bargaining strategy won the cast an historic $1 million each per episode.

That seems fitting because, as co-creator, co-writer and co-producer David Crane noted in the special, Friends was a genuine ensemble piece. Remove one character, one actor, one-note, and the symphony doesn’t sound as sweet. It’s hard to choose a favourite friend because they all matter and each contributes something essential to the whole.

During the couch-chat portion of the special, when moderator James Corden asked if they’d ever considered returning for an episode, or maybe a movie, Kudrow’s swift and decisive “no” was instructive. She felt the writers had done a good job giving the characters happy endings, which would need to be unpicked if the story was to be revived.

And, as co-creator, co-writer and co-producer Marta Kauffman put it in a nutshell: “If it’s about that time in your life when your friends are your family, once you have a family of your own, it’s no longer that time.” By the finale, Monica and Chandler had adopted twin babies and were preparing to move to the suburbs; Ross and Rachel confessed their love and finally got together; Phoebe had married Mike (Paul Rudd) and changed her name to Princess Consuela Banana Hammock. As an illustration of the perils of sequels, and why it’s better to leave well enough alone, Joey went on to star in a self-titled, short-lived, and forgettable spin-off. 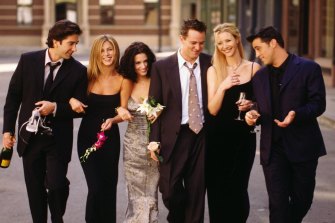 Where it all began; the cast of Friends. Credit:Publicity

It’s worth noting that the results for others who have succumbed to the entreaties to extend their screen life have been decidedly mixed. Arguably it worked for Will & Grace, but it’s a solitary success. Even without the off-screen controversy that torpedoed Roseanne, its revival and that of Murphy’s Brown were stilted and unsatisfying. They looked awkward and anachronistic as if transported to a time where they didn’t belong. And as Sex and the City demonstrated, half-hour comedies don’t necessarily shine on a bigger screen with a longer running time. They look thin, and not in a good way.

So even if there is an appetite to follow these friends, it should remain that: a craving. Trying to recapture the magic risks trashing the memory of something great, like a disappointing dessert at the end of a great meal.