Amid the songs, dances and celebrations, the Tony Awards ceremony on Sunday night will take a melancholy pause for the theater world people who have died in the past year. This time around, one of those will be the thrice-nominated Marin Mazzie, who died on Sept. 13 and will be granted a special Tony.

But countless other writers, choreographers and actors from the past have laid the groundwork for many of the shows up for the 2019 Tonys. Some are playwrights whose works are in the revival category (Arthur Miller of “All My Sons” and Lanford Wilson of “Burn This”); others gave birth to movies that inspired shows (Larry Gelbart, “Tootsie,” and Paddy Chayefsky, Peter Finch and Sidney Lumet, “Network”). The life of one actress inspired a new play (Sarah Bernhardt, “Bernhardt/Hamlet”).

For most of them, The New York Times wrote obituaries. Revisiting these lives and their legacies deepens our appreciation for the works that will be recognized at this year’s awards evening. Here is a sampling. 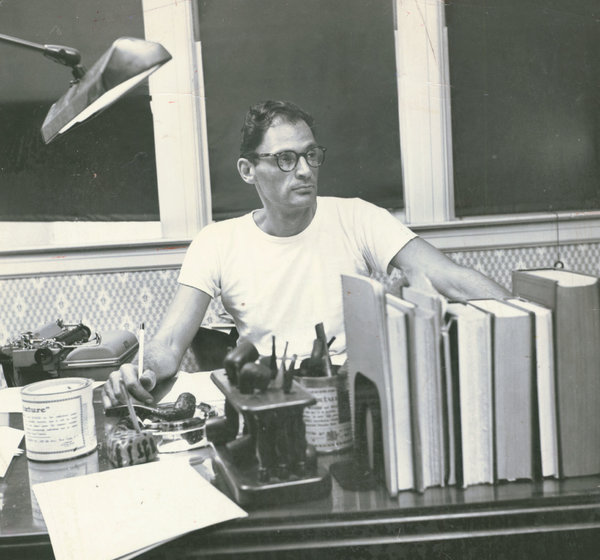 Arthur Miller’s play was originally produced in 1947 and opened at the Coronet Theater on Broadway. The Roundabout Theater’s production, directed by Jack O’Brien, is a nominee for best revival of a play. Miller was 89 when he died in 2005, and his obituary ran on the front page of The Times.

Eileen Heckart died not two years after playing the lead role in Kenneth Lonergan’s “The Waverly Gallery” in its premiere, Off Broadway. Her performance was a “beautifully coherent and intelligent portrayal of a woman sliding into incoherence,” The Times theater critic Ben Brantley wrote.

“Burn This,” by the Pulitzer Prize-winning Lanford Wilson, first went to Broadway in 1987, transferring to the Plymouth Theater after an Off-Broadway run at Theater 890. Adam Driver stars in the current revival, at the Hudson Theater. “Ragtag collections of prostitutes and pimps, drug addicts and sundry urban nighthawks, the people who populate his plays were unusual theatrical subjects in their day, but were no less sympathetic for that,” the Times obit said of Wilson.

“Tootsie” the musical has received 11 Tony nominations; “Tootsie” the 1982 movie received 10 Academy Award nominations (winning one Oscar, for best supporting actress — Jessica Lange). Two of those nominations were for the screenplay, by Larry Gelbart and Murray Schisgal. Here is the obituary about Mr. Gelbart, who died in 2009.

The play is derived from the great 1976 movie starring Peter Finch, written by Paddy Chayefsky and directed by Sidney Lumet, whose obituary also appeared on Page 1 in 2011.

The other half of Sonny and Cher, Sonny Bono, died in a skiing accident in 1998 after making a successful foray into politics. Naturally, he plays a major role in this new musical.

John Glines, one of the producers of the original version of the show then known as “Torch Song Trilogy,” took possession of the 1983 Tony for best play. He thanked “the one person who believed and followed the dream from the very beginning, who never said, ‘You’re crazy; it can’t be done,’ and I refer to my partner and my lover, Lawrence Lane.”

As Mr. Glines’s obituary said last year, “It is widely thought to have been the first time anyone thanked a gay partner identified as such at the Tonys.” It was a culminating moment, the obituary said, in Mr. Glines’s commitment “to producing and writing plays with gay characters and gay themes that would appeal to a broad audience.”

Agnes De Mille had never before choreographed for Broadway when she received the assignment for the original “Oklahoma!,” which opened in 1943. She brought the refinement and creative imagination of the modern dance world and changed how American musical comedy could look. She also created one of the most memorable dance moments in musical theater: the show’s dream ballet. Ms. De Mille died in 1993.

Cole Porter’s songs and lyrics often overshadow the contribution of the married couple who wrote the book to “Kiss Me, Kate.” They were the successful writing team of Bella Spewack and Sam Spewack, although in this case Bella seems to have done most of the work. She also was known for taking on the critics, personally. She came out onstage one night after one of her shows received poor reviews and told the audience to sing its virtues to their friends.

In Theresa Rebeck’s play “Bernhardt/Hamlet,” Sarah Bernhardt, one of the most celebrated actresses of modern times, takes on the role of Hamlet. When she died in 1923, her obituary commanded the most prominent space in newspapers: Page 1, above the fold.

Daniel J. Wakin is an editor on the Obituary News Desk. He has been a reporter and editor in the Culture and Metro departments and has reported from three dozen countries. He is the author of “The Man With the Sawed-Off Leg and Other Tales of a New York City Block” (Arcade, 2018). @danwakin