This revival has Norm wearing a tee-shirt that looks just like Scott Morrison’s mask, although Norm’s tee-shirt has “Australia” written on it, in case someone’s a bit slow with flags. Maybe Morrison’s mask has “Australia” on it, too – tucked under his chin, like a sender’s address on the back of an envelope. In an eerie coincidence, Norm a church-goer with a hostile world view and a deep-rooted suspicion of foreigners, came to life in Alex Buzo’s first play the same year Morrison was born: 1968. 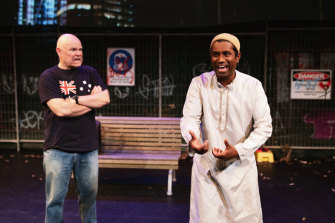 Buzo understood the nuts and bolts of Australian culture; a warts-and-all fascination tinged with fondness. That’s why Norm is such an enduring character: Buzo doesn’t hate his racist, angry, thick-headed, pugnacious creation. He gives him a soft side and warm side and lets him amuse us with rabid colloquialisms, whereby an unloved tall bloke is “a long, thin streak of pelican shit”.

Norm needed a victim, and Buzo bequeathed him Ahmed, a Pakistani studying humanities. Justifiably wary, Ahmed dances around Norm verbally, almost bathing and purifying him in good manners, except Norm is beyond redemption, and Ahmed has his own agenda: to pick up an education, and then return to his native Pakistan as a vengeful scythe against privilege and corruption.

This Australian Theatre Live production has Laurence Coy revisiting the role of Norm and Aarne Neeme revisiting the role of director (assisted by Terence Clarke). The setting has been moved on a couple of decades, so that rather than having been in Tobruk, Norm’s now a Vietnam veteran. Coy fully personifies Norm’s stocky, nuggety belligerence, even if his favoured hands-on-hips confrontational stance could occasionally have been alternated with defensively folded arms.

But as the little 45-minute play wore on, he became ever more convincing, which is crucial, or his closing assault on Ahmed – hardly a spoiler 53 years on – would seem to come from nowhere, rather than from a seething snake-pit of perceived injustices. Rajan Velu, meanwhile, crafts a dignified Ahmed, who lets us know he is one step ahead of Norm (at least until the brutal end) without letting Norm know. The great sadness about this pivotal work of Australian theatre is that Norm is neither less grotesque nor less believable than he was in 1968.