A Three Mobile customer has revealed the hilarious exchange they had with a live chat operator for the company while trying to switch contracts.

The Reddit user, going by the handle @Am_I_the_naq, from the UK, posted a screen grab of the humorous conversation with customer service representative Anand as he battled to switch over from a pay as you go deal.

But Anand refused to make the changes without speaking to the account holder – whose name was registered as ‘Anon Ymous’ – and confirming their date of birth and postcode.

When the Reddit user tried to explain that this person ‘doesn’t exist’, the customer services rep persisted, saying they needed to verify the identity of ‘Anon Ymous’.

So the Reddit user went along with Anand’s requests, claiming to be ‘Mr Ymous’ in order to get his account verified – leaving other users divided over who was in the wrong. 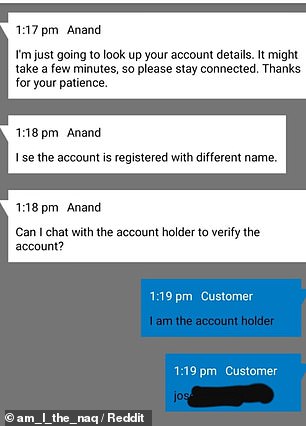 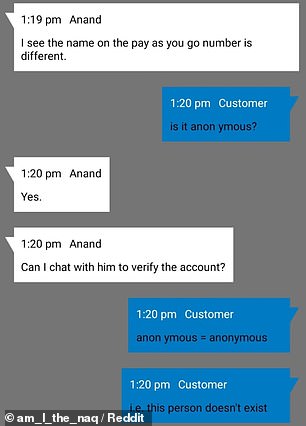 The British Reddit user, going by the handle @Am_I_the_naq, took to the site on Saturday revealing the hilarious screenshots of his conversation with a Three Mobile chat operator

The chat, which received nearly 15,000 up votes and over 330 comments since it was shared on Saturday, was shared alongside the post: ‘Legit conversation I just had with Three live chat.’

The exchange started with the customer service representative, called Anand, searching for the man’s details.

Anand then notices that the account was registered in a different name, not the poster’s, and requested to speak to the account holder as per data protection laws.

As per the 1998 law, data cannot be released to a third party without the consent of the individual it refers to. 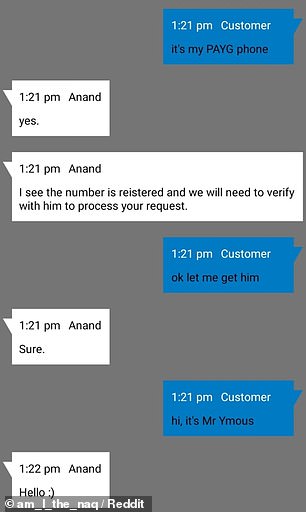 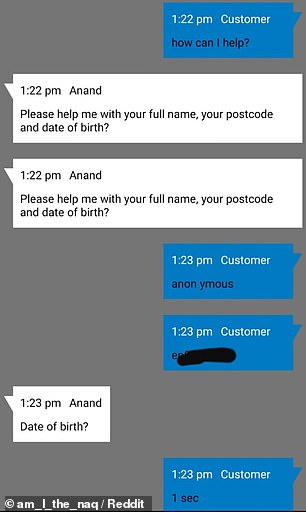 The chat, which received nearly 15k up votes and over 330 comments, started with the customer service representative, called Anand, searching for the man’s details

Despite the Reddit user trying to explain that he was the account holder, Anand insisted he spoke to ‘Anon Ymous’, whom the account was registered with.

After saying ‘this person does not exist, it’s my pay as you go phone,’ the Reddit user gave up and says: ‘OK let me go get him [Mr. Ymous].’

‘Hi, its Mr. Ymous,’ he told the operator, who replied: ‘Hello,’ with a smiley face.

When asking for details including postcode and date of birth, the man had to state his ‘full name’ as Anon Ymous. 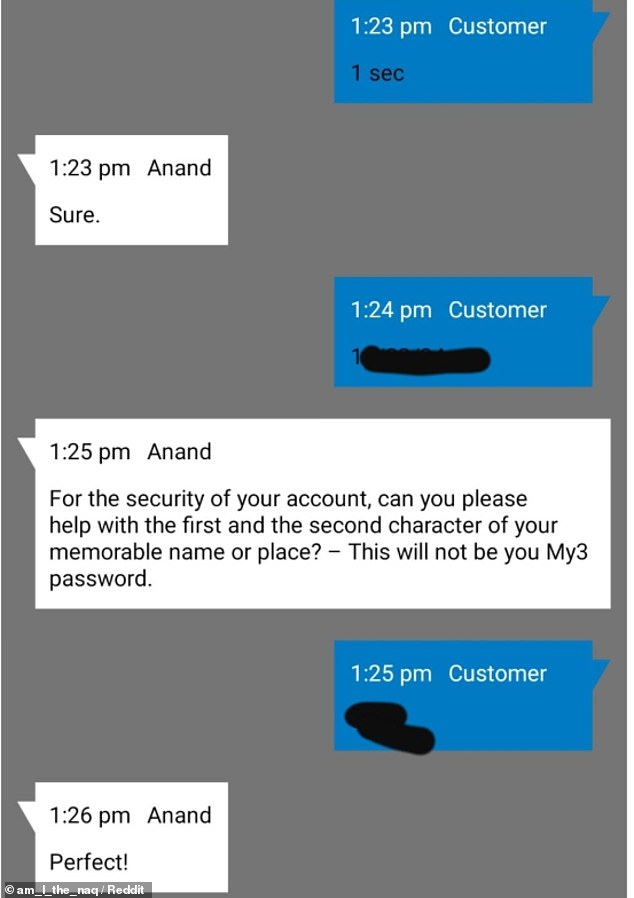 He then answered his security details correctly, indicating that, despite the silly name, he was indeed the account holder.

Anand went on to call the way he answered security questions ‘perfect’.

The post left other Reddit users chuckling, with one saying: ‘Mr. Ymous, do you have a brother called Mick?’

Another reminisced: ‘I was raised Catholic and when I went to church I noticed about 20% of hymns in the entire hymn book were by ‘Anon’. I remember thinking ‘he wrote a lot of hymns.’

Reddit users were divided over the post, which left some in hysterics, but others suggested the original poster was ‘just trying to be smart’

However, some users thought the original poster gave himself unnecessary problems by using the fake name in the first place.

‘Entirely OP’s fault this one. The support guy is literally just following their script so they don’t get fired. OP was the one trying to be smart with a fake name,’ one person said.

‘Yeah. They really asked for this one. Perfect service in my opinion. Nice to know they have good security no matter what,’ agreed another.