Three people who came to Australia under disgraced former Liberal MP Daryl Maguire's cash for visas scheme have become citizens, immigration officials have revealed, and another six of them are still in the county.

The Independent Commission Against Corruption is investigating whether the former NSW politician misused his time in office to his own financial benefit, including through the cash for visas scheme, which has been linked to the business he silently directed, G8wayinternational Pty Ltd. 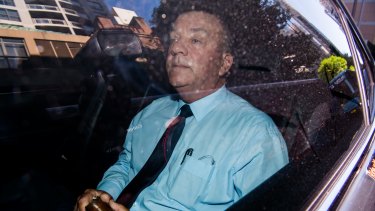 Daryl Maguire is being investigated by the ICAC over a cash for visas scheme, which has led to three people becoming Australian citizens.Credit:James Brickwood

On Friday the ICAC announced the notifications of its potential findings will be delayed, while in Canberra Home Affairs deputy secretary Andrew Kefford told a Senate estimates hearing that nine of the 14 people named during ICAC proceedings were still onshore, having obtained visas through the scheme.

Three had since become citizens, he told a Senate estimates hearing, and he undertook to find out whether any were permanent residents.

"How did we get to a point that three people became citizens of a country when they purchased their way fraudulently into Australia?" she asked.

Home Affairs secretary Mike Pezzullo said the department intended to advise the minister to cancel any visas obtained fraudulently but it had to do its own investigations, not rely on Mr Maguire's assertions, and that process was still happening. The government also had the power to strip citizenship from people if it was obtained fraudulently.

"We will come down in a very tough-minded way once we've done our process," he said.

"I don't want to cause any unnecessary anxiety in relation to the three citizens, but if they've obtained citizenship fraudulently, the advice to the minister will be take it off them."

Australian Border Force officials are also investigating whether any criminal offences may have occurred in relation to the scheme.

In September, the ICAC heard from two Wagga Wagga businessmen who had accepted cash kickbacks of $30,000 to falsely employ Chinese nationals for three months as part of the visa scheme. Both said Mr Maguire introduced them to the scheme.

It's been alleged that Mr Maguire conducted much of the business relating to the visa scheme from his parliamentary office.

The commission also heard NSW Premier Gladys Berejiklian had a secret relationship with Mr Maguire for several years, but "did not want to know" about his business dealings.