More than 20 coronavirus testing sites in greater Melbourne were forced to turn people away at some point on Wednesday, with queues blowing out to four hours and extended wait times ruining holiday plans.

About a quarter of the demand for testing was from people travelling to other states where negative PCR results are required before entry.

The stress those rules have placed on the testing capacity of Victoria and NSW prompted a “constructive discussion” at national cabinet on Wednesday and Prime Minister Scott Morrison said he wanted the issue resolved as soon as possible. 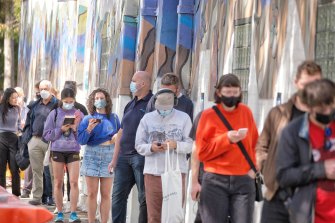 Queues for COVID-19 testing snaked around the corner in Collingwood on Wednesday morning.Credit:Luis Ascui

He said the Australian Health Protection Principal Committee – which already advises that non-targeted PCR testing of asymptomatic people should be discouraged as a waste of resources – would provide further advice in the coming fortnight about the necessity of testing before travel, or whether rapid antigen tests could be used instead.

“It is important that we focus the PCR tests on those who are close contacts and those who are symptomatic … and not be standing in queues with other people who are just looking to get on a plane,” Mr Morrison said.

Just one in every 1000 people who were tested prior to interstate travel in Victoria were found to be positive, compared with 17-20 of every 1000 close contacts.

Queensland Premier Annastacia Palaszczuk said the state was awaiting further advice on whether rapid antigen tests could be used for travel from January 1, but that pre-testing requirements were necessary to protect Queenslanders from the virus.

A spokesman for the South Australian government said the government “will continue to act on expert health advice and will make decisions accordingly”. 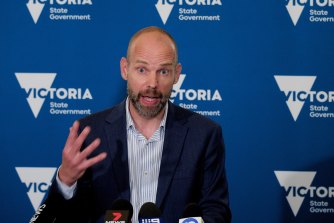 This week’s delays prompted testing provider EAST, which operates five clinics in Melbourne’s outer east, to warn results were taking up to three days to be processed. Mr Weimar said 90 per cent of test results were still returned the following day.

Victoria recorded 1503 new COVID-19 infections on Wednesday and six deaths from the disease. The total number of Omicron cases in the state reached 61 and a total of 394 people were in hospital with COVID-19. 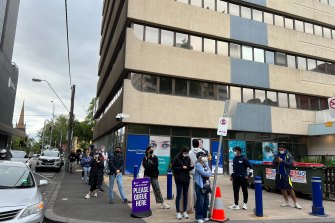 The line at St Vincent’s about 7am on Wednesday.

Mr Weimar said he hoped fewer people would clog up the state’s testing system for “bureaucratic reasons” after a record 92,262 tests were processed on Tuesday.

“It is not a highly productive way to use a PCR testing system, and of course, it puts additional pressure on, so the additional queues and waiting times we’re seeing at the moment are a by-product of that. We hope to move to a more sensible arrangement in future,” Mr Weimar said.

“Just jamming up the system with people who particularly are asymptomatic, particularly if they haven’t been close contacts, if they’re just needing tests for some other kind of bureaucratic reason – that’s the kind of stuff that I think we’d like to reduce.”

Prominent epidemiologist Tony Blakely, from the University of Melbourne, said a rapid antigen test in the 24 hours before travel would be more useful than a PCR test three days earlier.

He said a rapid antigen was “more than enough, it’s probably as good as, if not better”, particularly for states such as Queensland and South Australia which had accepted some level of COVID-19 transmission was inevitable.

Testing asymptomatic people who are not close contacts was a poor use of resources, he said.

“It’s probably tipping the whole system over, in that it’s detrimental to everybody. It’s actually delaying the test results coming back for those people who are symptomatic or for whom we want to know the test result faster,” Professor Blakely said.

People queued from 4am at the Aughtie Walk drive-through site in Albert Park, where operators were forced to temporarily suspend testing just after 6am for the third day running.

Mr Weimar also urged Victorians to use rapid antigen tests proactively when they were asymptomatic before attending events, for example, but that there was capacity to test a few thousand more people a day before they were overwhelmed.

“The reason we suspend new people coming into testing stations [is] we don’t want people sitting in queues for four or five hours where we can possibly avoid that,” Mr Weimar said.

“We would much rather move people to other testing stations or encourage them to come back later on the same day.”

Opposition health spokeswoman Georgie Crozier said other governments should consider allowing travellers to use rapid antigen tests as a screening tool to alleviate the burden on PCR testing sites.

“[Lengthy queues at testing sites] is a lack of planning by the Andrews government in the lead-up to Christmas time, as we’re reopening and people want to spend time with family and friends to get tested, and they just can’t,” Ms Crozier said.

Victoria has ramped up its testing capacity since May, with testing provider Cohealth taking a record number of tests on Tuesday after tripling its staffing levels. Pop-up testing sites have also opened this week at Overton Road in Frankston, Chisholm TAFE Dandenong and Berwick campuses, and at Melbourne Town Hall.