Stars, male and female, come in different packages. There’s the glamorous kind such as Charlize Theron or Jennifer Lopez, who often have to fight for credibility — and there are those who make a principle of refusing glamour, so their popularity seems achieved against the grain.

In the second category is Elisabeth Moss, who has long been recognised as a performer worth taking seriously — as seriously as she clearly takes herself. Her characters tend to be survivors of one trauma or another, and for someone who makes a living on camera, she's uncommonly attuned to the discomfort of being watched.

Moss’ particular niche, what she brings to the screen, is not easy to summarise. Physically slight, she has reserves of raw emotion to draw on, but there’s also a chipper, all-American side to her persona, as well as an emphasis on slyness and concealment. Offscreen, she is one of Hollywood’s most prominent Scientologists — which is no one’s business but her own, but gives her an extra layer of mystery. 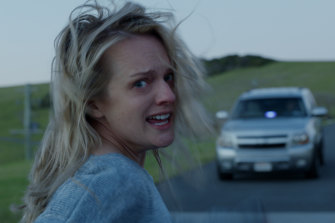 Elisabeth Moss plays a woman at the mercy of an unseen force in The Invisible Man.

One of Moss’ great assets is her unusual face, an instrument she handles like a virtuoso: broad and seemingly open, but oddly proportioned in a way that leaves room for doubt about what her expressions imply. Her eyes can flash in a joking but dangerous manner — or her scowl yield to a toothy, childlike grin, which in turn may freeze into chilly irony.

What most commonly underlies these shifts is a simmering anger, often displayed through her characters' efforts to keep it in check: her voice may drop to a tense near-whisper, or her briskness grow brittle and forced, punctuated with little snickers of disbelief.

Moss' biggest successes have been in TV, but it's not hard to see why she’s having a moment on the big screen. Her latest film, in cinemas soon, is a revisionist version of The Invisible Man, written and directed by Australia’s Leigh Whannell (Saw).

The main character may still be the male scientist (Oliver Jackson-Cohen) who finds a formula for invisibility. But Moss is plainly the star, playing a woman at the mercy of an unseen force, which judging by the trailer could well be a symbol of patriarchy as such.

As this suggests, Moss’ particular qualities match up well with what we’ve come to call the post-MeToo moment in popular culture, where renewed attention is being paid to how women can or should position themselves in a world controlled by men.

After all, she has been dealing with this subject for much of her career — at least since 2007, when she came to prominence as sharp-witted ingenue Peggy Olson on Mad Men, cable TV’s ambivalent ode to the glory days of 20th century misogyny.

This was the first of several shows to cast Moss as a canny strategist seeking ways to function within an oppressive society, earning her flattering labels such as “the queen of peak TV”. Starting in 2013, there were two seasons of Jane Campion’s mini-series Top of the Lake, in which she played a stoic cop investigating sexual assault cases in a remote part of New Zealand and later in Sydney.

Then, in 2017, came the role which has defined her perhaps more than any other, in the TV adaptation of Margaret Atwood’s novel The Handmaid’s Tale, set in a future where the US has become a Christian fundamentalist dictatorship where ultra-traditional gender norms prevail. 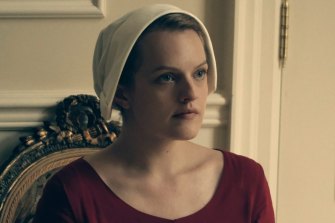 As Offred in The Handmaid’s Tale, Elisabeth Moss is able to convey emotion without words.

Starting out as the “handmaid” of a government official (Joseph Fiennes), Moss’ character Offred has little freedom to speak her mind, much less rebel. This means her thoughts have to be relayed in voiceover, often in a heavy-handed manner — but the show, which is expected to begin filming on season four in March, also depends on Moss’ ability to convey emotion without words.

Even as an admirer of Moss, there was a point roughly halfway through the first season of The Handmaid’s Tale when I began to feel you could have too much of a good thing. By now it’s almost a given in her films and TV shows that sooner or later the action will come to a halt and her face will be framed in tight close-up: a drama in itself, boiling down to a struggle between the desire to express pain and frustration and the need to keep up appearances.

It’s an effective tactic, but it can easily be overdone, although the fault may lie less with Moss herself than with a format that tends to serve up her finicky sensitivity as a delicacy to be savoured. Even the close-ups of Moss in Jordan Peele’s grisly recent horror film Us echo this approach — or perhaps burlesque it, mocking the white middle-class sense of victimhood that could be said to define her career.

The fullest display of Moss’ strengths and weaknesses can be found in the films she has recently been making with the independent director Alex Ross Perry, a talented but often frustrating figure in his own right.

Perry has a knack for pastiche and for inventively spiteful dialogue, but when he wants to reach us emotionally he has to rely on his actors, who are encouraged to go to town with results that can be memorable, exhausting or both.

In Perry’s witty 2014 literary satire Listen Up Philip, Moss came close to stealing the show as the sometime girlfriend of the title character, a ranting novelist played by Jason Schwartzman. She and Perry had less success with their follow-up Queen of Earth, an overblown yet tepid rehash of the 1970s sub-genre of arty thrillers about women losing their minds.

The most ambitious collaboration between Perry and Moss is their latest, which missed out on a theatrical release in Australia: the backstage drama Her Smell, a 1990s period piece that chronicles the decline and fall of one Becky Something, lead singer of the fictitious riot grrrl band Something She. 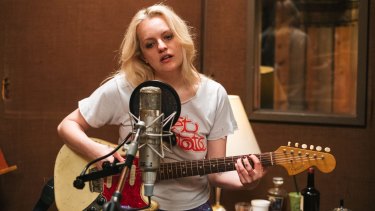 Elisabeth Moss in Her Smell shifts between poses and emotional registers.Credit:Donald Stahl

This is, in many respects, a tour-de-force performance: Becky is a formidable personality, even if the energy she transmits is at first almost entirely negative. Like a post-punk version of the stage legend played by Bette Davis in All About Eve, she’s constantly shifting between poses and emotional registers, while denouncing those around her in elaborately theatrical ways.

The film taps into many of the themes that have defined Moss’ career, including an ambivalence about stardom itself. Everyone around Becky wants to control or capitalise on her image, and Becky herself is desperate to remain the centre of attention. But at the same time she wants to hide, endlessly postponing recording her new album and freezing when she has to face a crowd.

Many actors would look for ways to make Becky more quickly likeable, or else reduce her to a figure of fun. Moss does neither, turning herself into a hot mess with a conviction that parallels the character’s own.

Yet somehow, doubts persist. Can we truly believe in Moss as a former rock star, especially given that we barely see Becky at the height of her fame?

Even as the character spirals out of control, the performance retains a fussy precision far removed from the instinctive approach of Becky’s partial model Courtney Love, whose string of film roles in the late 1990s revealed her as an acting powerhouse of quite another kind.

The Invisible Man opens February 26. Her Smell is now streaming.

Paris Hilton: ‘I’ve worked way too hard to just give my life to someone’
We and our partners use cookies on this site to improve our service, perform analytics, personalize advertising, measure advertising performance, and remember website preferences.Ok