Senior National Party figures have said former NSW deputy premier John Barilaro told them that a top public servant gave him a reference for his $500,000-a-year job as the state’s trade commissioner to New York.

Barilaro said he received a reference from Gary Barnes, the most senior public servant in the Department of Regional NSW, the sources said. Barnes reported to Barilaro when he was minister for regional NSW, industry and trade. 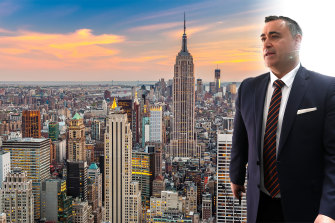 Former NSW deputy premier John Barilaro has been appointed to the plum role of US trade commissioner.Credit:Dominic Lorrimer

When asked to confirm the Barnes’ reference, a spokesman for the department said: “The Department of Regional NSW does not comment on recruitment matters that fall outside of our agency.”

Barilaro was also contacted for comment about the reference. He referred all questions to Investment NSW. National Party sources, who cannot speak publicly under party rules, said Barilaro spoke about the reference at the party’s weekend state conference.

It has also emerged that the Investment NSW boss who appointed Barilaro to his plum trade job cancelled the independent recruitment search for the role the day before Barilaro announced his resignation from politics.

Investment NSW chief executive Amy Brown will be the first witness called to the upper house’s parliamentary inquiry into the appointment process, which starts on Wednesday.

Brown emailed the global recruitment firm running the talent search on October 3, 2021, saying their services would no longer be needed because the trade positions would now be ministerial appointments.

Barilaro, who Brown reported to as trade minister, announced the next day he would be quitting politics, citing the toll that public life had taken on him.

Barilaro created the trade commissioner roles when he was trade minister.

NSW Premier Dominic Perrottet has admitted that while Barilaro’s position did not go to cabinet, two similar positions were mistakenly reviewed by the ministry: the newly resurrected agent-general position in London and the Tokyo trade role.

However, Perrottet has insisted it would have been inappropriate for the Barilaro role to be considered by cabinet because it was not a ministerial appointment.

The premier has moved to distance himself from the appointment of Barilaro, which is developing into a worsening scandal for his government.

Perrottet insisted the appointment was made at arm’s length from government and on Thursday announced he had directed the secretary of the Department of Premier and Cabinet to conduct a review into the affair.

“The Agent-General for London and STIC for Tokyo will be transitioned across to the new arrangements. This means that the recruitment process for the STIC positions in Singapore, India/Middle East and China will need to be ceased, and all candidates informed that we’re not going any further with the process.”

When asked who directed Brown to change the application process, a spokesman for Investment NSW said: “Investment NSW is assisting the Department of Premier and Cabinet in its review of the Senior Trade and Investment Commissioner – Americas recruitment process. It is not appropriate to make further comment on the matter at this time.”