Reservoir is a big suburb, with lots of streets. Liam Vaughan isn't sure exactly how many, except that it's in the hundreds. He should know, he's ridden all of them.

With travel restricted to within 5 kilometre of home, there isn't much exploration to be done right now. Lockdown has left us with one option: his suburb. 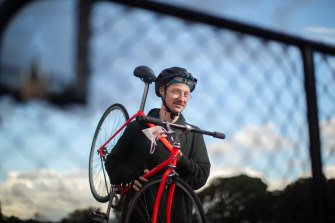 Liam recently took this idea to the extreme, riding the "Tour de Reservoir" – every single road, street and alley of his home suburb – in a short window without a map.

It's known as "burbing", an activity which has taken hold in recent months among a small community of cyclists in Melbourne confined to their local area.

All up, Liam's ride was just under 400 kilometres, which he completed in 15 hours. He said he got the idea to cycle Reservoir after seeing someone do the same in Brighton.

"I've got so much more free time, I don't work anymore," the furloughed librarian said. 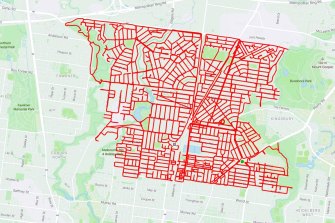 Liam Vaughan’s ride on Strava, an app which records where you travel. Credit:

"I was like surely there's a way I could see every street."

Now, it's important to note here that Liam didn't break any lockdown rules while completing his ride. It took him six days all up, and happened before stage four restrictions confined Melburnians to one hour of exercise a day.

Technically, he could ride it again under the current rules because he stayed within a 5 kilometre radius of his home.

To complete his journey, Liam split the ride into several "stages". Before setting out, he memorised what the area looked like so he wouldn't get lost.

At the start he would ride around the perimeter of each section before moving in to start criss-crossing the map. He stuck to streets, roads and alleys with names only (so no paths).

"I love maps and trying to figure out an efficient route, it's that travelling salesman problem, trying to go up every street without doing the same one twice."

But that didn't always work out.

"There were a lot of dead ends and going up and down the same street, especially if it was a main road," he said. "I'd use that as a thoroughfare to get to other sections."

It wasn't hard to get lost, either, particularly in the more suburban areas that looked the same.

"It was really doing my head in after a long ride, I'd lose my navigation skills," he said.

After finishing a section, sometimes Liam would get home and realise he had missed a street. So he would go back the next day and ride it again.

The whole experience was recorded on a GoPro, which Liam turned into a video akin to the slow TV shows which take place on board trains.

Liam said the ride gave him a sense of adventure that has been missing during the pandemic.

"I'm deprived of that ability to discover new places when we're stuck at home, now we're travelling within our own postcodes and it's still exciting," he said.

"But there's no way I'm riding on Mahoneys Road again, it's so busy."

In need of some good news?

Stories that will brighten your outlook, delivered weekly to your inbox. Sign up now for our Greater Good newsletter that is launching soon. Sign up to The Age here; Sydney Morning Herald here; Brisbane Times here and WAtoday here.