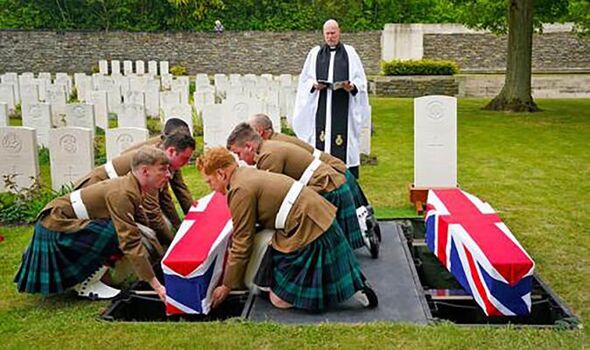 Private William Johnston, of the 7th Battalion of the Royal Scots Fusiliers, and an unidentified soldier who served in the East Yorkshire Regiment, were buried yesterday at the Loos British Cemetery in France. Bearer parties were provided by the Yorkshire Regiment and the Royal Regiment of Scotland. The two soldiers were killed on September 26, 1915, at Loos, during the largest British attack of the year.

The remains of Pte Johnston, who was 39 when he died, were found in 2018 during routine ordnance surveys in Lens.

Nicola Nash, of the MoD’s Joint Casualty and Compassionate Centre, said: “We were lucky with Johnston because he was discovered with a spoon with his service number on it and a pocket watch.”

Sharon Williamson, his great-great-niece, was then contacted by the MoD unit, known as the war detectives, for a DNA test.

Sharon, 48, of Co Armagh, said at the burial: “It really brings home that these people can never be forgotten.”