Ride-sharing giant Uber has urged states to back off from regulating the gig economy, arguing the issue is a national one and should be dealt with by the federal government.

In a submission to a NSW parliamentary inquiry into the future of work, Uber also calls for all gig economy companies to be forced to give their workers insurance, which Uber already provides, as does food delivery giant Deliveroo. 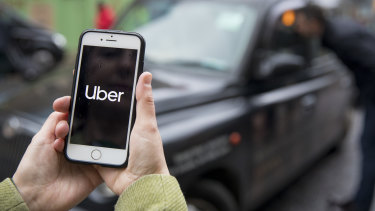 Uber wants any regulation of the gig economy to come from the federal government.Credit:Bloomberg

Uber is facing the threat of regulation in Victoria where the Andrews government has vowed to strike out on its own if the federal government does not act on the gig economy, in which workers are typically classified as contractors and don't get the same protections of employees, such as minimum wage.

Australia's largest ride-sharing company argues state-based regulation would be confusing and add red tape to companies trying to help people earn a living. It points to a 2009 Labor federal government boast that its industrial relations overhaul would "end the overlap and duplication" of state and federal laws.

"Isolated state-based intervention into existing workplace laws should be avoided, to avoid returning to a system of haphazard state and federal laws regulating the same subject matter," Uber's submission says.

Australian law looks at factors including whether workers provide their own tools, uniforms, do their own bookkeeping, set their own hours and have their own brand to determine whether they are independent contractors or employees. The more help a worker gets, the more likely they are to be classified as an employee.

The workplace watchdog has classified Uber drivers as contractors because they set their own hours but legal experts and unions argue they have the hallmarks of employees because other than choosing their own hours, Uber sets most of the terms of their arrangement.

If ride-share drivers were classified as employees the sector argues they would lose the flexibility of choosing when and where they work, something that suits those with multiple jobs or family commitments.

Transport Workers Union national secretary Michael Kaine accused the company of running scared in the face of regulation. "Uber's track record around the world is to fight any attempts to give workers rights, as in California and the UK, and we have no reason to believe they want to do anything differently in Australia," Mr Kaine said.

The union, which has brought several legal challenges against Uber, claims the company's insurance is inadequate.

While industrial relations is largely a federal area, Uber says NSW should mandate that gig platforms either provide insurance for drivers or reimburse them the cost.

In the wake of a landmark report from a state government inquiry in June, Andrews government industrial relations minister Tim Pallas said gig economy workers needed help. "It's essential they are given the protection they deserve," Mr Pallas said.

The Morrison government is running five working groups on industrial reform and Attorney-
General Christian Porter has previously said it is alert to the challenges of the gig economy.