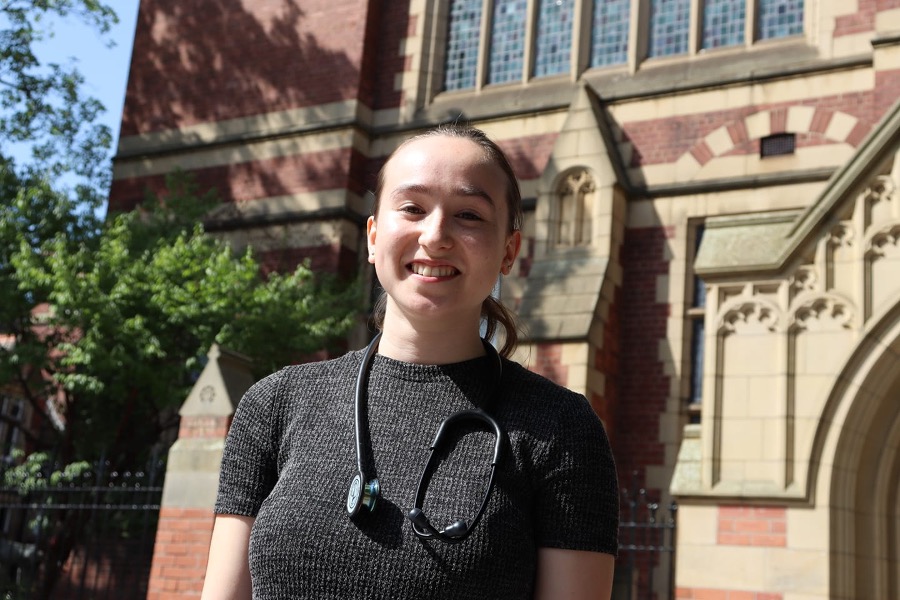 As soon as I opened a letter from my landlord and saw he was upping my rent by £520 this year, I felt angry.

I immediately messaged him and pleaded with him to reconsider – I’d been such a good tenant for the past four years – but it was no use.

As a fourth year student doctor, this – and the general rise in the cost of living – is likely going to mean taking on another job that I don’t have time for.

I grew up in a small Essex town, where my single-parent dad was a factory worker. He can’t read or write very well but I have fond memories of him reading me Mr Men books when I was a child.

He always had higher aspirations for me and would lovingly warn me not to grow up ‘a dunce’ like he was. It was around this time that I realised I had the resilience needed for medicine.

Unfortunately, by the time I finished primary education, I had attended nine different schools, missed over a year of learning, and had failed my 11+. I was going through family issues at the time.

During my A-levels, I also became a young carer for both my dad and my grandmother. This meant that I would come home and do any paperwork.

I’d also get up in the night to care for my grandmother with dementia before having exams the next day. I pushed through all of this and got a life-changing offer to study at Leeds Medical School.

I was ecstatic that I’d ended the cycle of poverty and that all my dad’s sacrifices weren’t for nothing. Little did I know at the time that studying medicine was not fully-funded and I’d have to work multiple jobs just to make ends meet.

The first three years of studying medicine involved mixed lecture-based and placement teaching – depending on your university, of course. During this time, students are eligible to receive a tuition fee loan of £9,250 and a means-tested maintenance loan of around £9,000, if you live away from your parents.

During this time and throughout the pandemic, I worked on the Covid-19 wards as a healthcare support assistant, and as a martial arts instructor.

But it’s unsustainable to work seven days a week, pass your exams, and try to take care of your mental health at the same time.

This means I wake up in the morning already feeling sluggish and very much burnt out by the time I get to the library. It’s like a mental fog and you’re constantly on survival mode.

In the fifth year of studying, student loans from Student Finance England – for maintenance and tuition fees – are stopped.

From year five onwards, tuition fees are paid by the NHS Student Bursary Scheme, along with a reduced maintenance loan and a non-means tested grant of £1,000.

For me, this will add up to around £6,500, but that isn’t enough to cover the costs of living.

It is estimated that students – in an area like Manchester – need at least £10,300 per year to cover the current costs of living. This number rises to at least £13,200 per year for Londoners specifically.

The costs of being a medical student are likely to be far higher due to placement-related costs, such as petrol and parking too.

I know that this cut in funding is coming up so I worked two paid summer internships – one working for the British Medical Journal writing articles and the other working on the university’s student access strategy on post graduate diversity – at the same time last year to save money.

This means I was starting the commonly known most difficult year of medical school, fourth year, already feeling burn-out and unappreciated.

Hardship funds aren’t much of an option either because owning a car disqualifies you from most of these – even if it’s a third hand one-litre like I have.

But having a car means I don’t have to get three buses back from placement and that I’ll have a bit more time left over for studying. This isn’t an exceptional circumstance – hundreds of low-income medical students are placed in this situation by the Department of Health and Social Care.

It shouldn’t be down to local hardship funds to foot the bill though. Student doctors deserve full-time funding so we can focus on our studies and give the best care to patients that we can.

So Sajid Javid, my question to you is this: why is £6,458 deemed enough to live off for an entire year? Is this measly sum because medicine isn’t traditionally for the working-classes like me?

This shortfall is how I came to be involved in the #LiveableNHSBursary campaign, which calls for immediate access to a £5,000 NHS Access Learning Support grant that would bring our funding in line with other healthcare courses.

The campaign was founded by four female medical students, Eilidh, Trisha, Michaela, and I alongside the Doctors Association UK (DAUK). We realised we were all fighting for the same thing and decided to join forces on Twitter.

We’re also calling for access to full student maintenance loans of £9,000 to stop student doctors having to use food banks.

Adding to my current £80,000 of student debt doesn’t concern me – many students would rather take on additional student loans to pay for rent rather than taking out a credit card.

If we want to keep the best doctors in the NHS, we need to make them feel like they belong here. Many of my peers are already talking about moving to New Zealand, Dubai, Australia, and the USA – where working conditions are much better – and will allow them to pay off their overdrafts from university.

Many medical students like me were your Covid-19 vaccinators, your porters and your 111 operators during the pandemic. The NHS is currently facing a shortfall of staff, with 110,000 posts unfilled in England alone.

We are ready to join the workforce to help solve this crisis, but it feels like we have been set up to fail.

You can support this campaign via the Doctors Association UK website here.