Nobody needs an angry gang of protesters to tell them that tempers are fraying in big parts of the country as Australians suffer through lockdowns and wait, grimly, for their political leaders to take them out of a tunnel with a very small light at a very distant end.

The mob on the streets of Melbourne, occupying the Shrine of Remembrance to claim to fight for freedom, is only the extreme sign of the fury felt by many who obey the law behind a locked front door. Stuck in their households, subject to extraordinary powers that make so much of ordinary life a crime, many Australians are worn out by 18 months of pandemic rule and can easily turn their resentment on those who run the show. 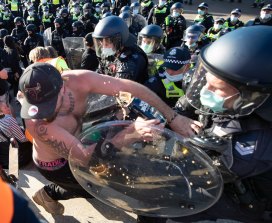 Police clash with protestors at the Shrine on Wednesday. Credit:Jason South

Which means the next leader to face the people might want to be careful. Some of Scott Morrison’s colleagues believe the Prime Minister is in for a shock when he calls the election and voters get a way to vent their anger. He cannot delay this date any later than May. The only state leader to face the same reckoning around the same time will be South Australian Premier Steven Marshall on March 19.

Liberals who used to dream of a crushing victory across federal seats in NSW and Queensland are now much gloomier about their prospects.

“We’ll be lucky to hang on to what we’ve got,” says one. It is not that they think Labor leader Anthony Albanese has a compelling plan to win the day. It is more about a backlash from a weary and unpredictable community.

In western Sydney, for instance, voters are cooped up in their homes while case numbers grow. Will they applaud Morrison when the election comes? Not according to a Liberal who knows this part of the world: “The moment they hear you’re from the government, they don’t want to talk to you.”

Morrison has a habit of patting himself on the back. “We’ve been cautious during the pandemic, and that has saved lives and it has saved livelihoods,” he says. There are good reasons for being positive: COVID-19 case numbers, illnesses and deaths are incredibly low in Australia compared with other countries.

Waiting for gratitude, however, can be a slow business in politics. It can take at least as long as a vaccine shipment or a quarantine station. So the pattern of the first year of the pandemic, when voters backed incumbent leaders in state and territory elections, cannot be taken for granted.

Justin Trudeau just found this out. The Canadian Prime Minister clung to power this week in an election that kept him in minority government, but voters did not stick to his plan. They slashed their support for him and his Liberal Party as soon as he called the election.

“The Liberals and the Prime Minister thought that the public’s approval of the Canadian government’s handling of the pandemic would inoculate it from any criticism for calling an early election,” says David Coletto, who tracked the campaign as chief executive at Abacus Data in Ottawa. “What they and most of us didn’t see was that the public was tired, grumpy and in no mood for the effort and energy an election requires. The moment he called the early election he went from being a pandemic Prime Minister to just another politician in it for himself. In an instant that goodwill disappeared.”

Morrison and Trudeau are chalk and cheese – one traditional, one woke – but the outcome in Canada is a cautionary tale. It is a reminder that a grumpy electorate can turn in an instant. Morrison cannot rush to the polls like Trudeau, who went about two years early, but the lesson puts paid to the idea (already dismissed by most) of a snap election in November.

The Morrison team is not ready for that race, anyway. In a curious example of complacency, the Liberals do not have candidates for the NSW seats they need to win if they are to increase their thin majority in Parliament. They have failed to heed the message from the party review of the last election, which faulted them for being too slow to find candidates in the biggest state.

Liberals love the idea of unseating Labor backbenchers such as Fiona Phillips in Gilmore, Emma McBride in Dobell and Susan Templeman in Macquarie. They just haven’t done anything about it. Nor have they found candidates for Parramatta or Warringah. They do not have a candidate to replace Craig Kelly in Hughes. (Lockdowns are a factor, but preselections have to happen somehow.)

The government is better prepared in Victoria, with candidates chosen for Dunkley and Corangamite, but that is not where the election will be decided. Everything turns on NSW and Queensland.

Could Morrison lose, narrowly, in an election that puts Albanese in power in a minority government? Yes, say Liberals. They will go into the campaign at a disadvantage. A safe Liberal seat in Western Australia, Stirling, has been abolished. A safe Labor seat in Victoria, Hawke, has been created. And the campaign for independents in seats such as Hughes – the “voices of” movement – adds a wildcard.

A more convincing Labor victory only comes if Albanese chips away at Morrison’s personal strengths, but the Opposition Leader is far behind as preferred prime minister, 45 to 26 per cent, and has negative performance ratings. It takes more than that to win power from opposition: Kevin Rudd did it in 2007 with a clear lead over John Howard as preferred prime minister, 48 to 39 per cent, an astonishing level of net satisfaction and a comfortable lead on primary vote. Labor today has none of those things.

Labor knows it is the underdog against a ruthless opponent. That will not change because Morrison has offended the French, for all the questions about his decision on nuclear submarines.

Those close to Morrison expect to fight the campaign on what comes after the pandemic rather than follow Trudeau’s example of forcing a choice in the middle of a crisis. They want to go to an election next year with an agenda for the recovery based on an economic platform.

Just as an early budget worked for Morrison in 2019, his supporters want a similar approach with an economic statement that sets up an election in May. The alternative is to go in March if there is any pandemic sunshine after summer.

It will not be easy to judge the exhaustion and exasperation in Australia by the time the next election comes, two years after the pandemic began. Tempers might cool as the vaccination rate grows and lockdowns ease, but nobody can be sure. Old assumptions about election campaigns may not work in a crisis that comes, with luck, only once a century.

So while the mob at the Melbourne shrine is a furious minority, attacking police in its hunger for a fight, it is also a sign of an unpredictable force that could shape the next election. If Morrison wants gratitude, he could always find another job. Some voters look willing to arrange it.

The Opinion newsletter is a weekly wrap of views that will challenge, champion and inform. Sign up here.