Western Australia’s environment watchdog has cracked down on excess carbon pollution from underperforming carbon storage at Chevron’s Gorgon LNG – Australia’s biggest industrial polluter – and added a requirement for total emissions to taper to net-zero by 2050.

This week, the WA Environmental Protection Authority recommended that Chevron must spare no expense to meet its pledge to store underground at least 80 per cent of the carbon dioxide from its gas fields and in 2025 start reducing total emissions. 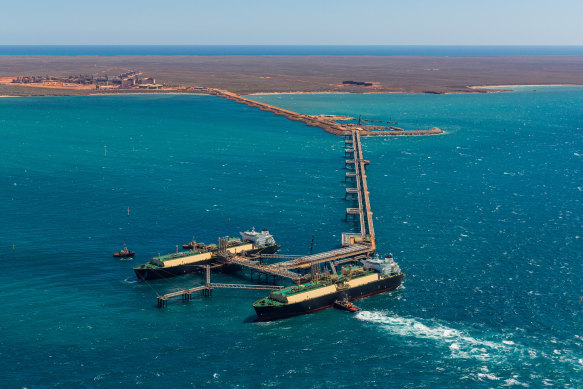 The move comes as the federal government reviews its safeguard mechanism, a scheme that sets pollution caps on the country’s 215 largest industrial and resources emitters, of which Gorgon has been the largest over the past five years.

Chevron was allowed to build its $US54 billion ($83 billion) Gorgon gas export project on Barrow Island, a nature reserve off WA’s north-west coast, only because it was suitable for burying the high levels of carbon dioxide in its offshore gas fields. But the CO2 injection system started late, has been shut down several times due to technical problems and now operates at well below design capacity, resulting in more than 10 million tonnes of carbon dioxide vented to the atmosphere.

Whitby’s spokeswoman said the minister would decide on the EPA’s recommendations – which are enforceable only with his approval – in due course.

To date, Chevron has been required to build a system capable of storing all of the about four million tonnes a year of carbon dioxide from offshore reservoirs along with natural gas and “implement all practicable means” to bury at least 80 per cent of the pollutant.

Chevron proposed that any new requirements should not be “disproportionate to their effectiveness” and only seek “best endeavours”, but the EPA considered this would be insufficiently clear or measurable.

Instead, the EPA recommended Chevron “implement all measures” to inject 80 per cent of the carbon dioxide. The absence of a “practicable means” limitation means Chevron cannot use excessive cost as a reason for inaction.

Chevron must purchase authorised carbon offsets, including Australian carbon credit units, for all reservoir carbon dioxide that is not buried.

The EPA has also recommended that Gorgon’s other emissions of about five million tonnes a year from burning gas to run its plant, be reduced in about a straight line from 2025 to zero by 2050, with offsets bought for any exceedance.

The EPA did not accept Chevron’s argument that tenure and logistical constraints of operating on a nature reserve meant it could not implement some emissions reduction measures. The regulator said logistical issues were a commercial matter for Chevron, access to additional land could be requested, and less polluting equipment that would require no more land had been excluded from the original design.

An independent review commissioned by the EPA found that better technology for generating power and compressing the gas to liquify it could reduce emissions by 1.2 million tonnes a year.

The EPA said it would be a “potentially perverse outcome” if Gorgon’s location on Barrow Island – only approved to allow emissions to be reduced – was now a factor in not taking action.

“If endorsed by the minister, the EPA’s recommendations would result in Gorgon having the deepest greenhouse gas emissions reduction trajectory for an LNG project in WA to date,” he said.

The EPA has recommended a net-zero by 2050 trajectory for Woodside’s North West Shelf plant and is reviewing Woodside’s Pluto and Chevron’s Wheatstone plants.

Hatfield said Chevron was committed to achieving net-zero emissions at Gorgon but it was a big challenge with uncertainty about how to achieve long-term reductions.

The EPA did not require Chevron and its partners Shell and ExxonMobil to reduce the emissions from burning of Gorgon’s gas by their customers, known as Scope 3 emissions, as it considered they were not sufficiently within the company’s control.

However, it warned it may recommend that future projects with high direct and indirect emissions not proceed at all, rather than just impose conditions on their operation.

The Business Briefing newsletter delivers major stories, exclusive coverage and expert opinion. Sign up to get it every weekday morning.

Most Viewed in Environment