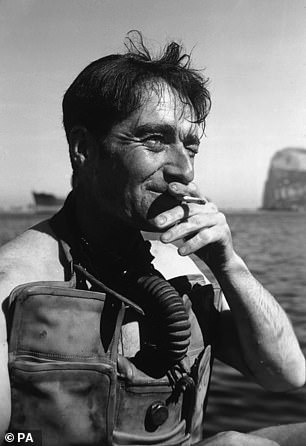 On the morning of Thursday, April 19, 1956, former Navy frogman Commander Lionel ‘Buster’ Crabb dived into the waters of Portsmouth Harbour.

Working for MI6, his mission was to investigate the underwater workings of a Soviet warship which was berthed there.

The ship had arrived on a goodwill visit, bringing the Russian leader Khrushchev. Crabb had reportedly told friends the night before that he was ‘going down to take a dekko at the Russian bottoms’.

He didn’t return from the dive. Fourteen months later a partially decomposed body was found floating 12 miles up the coast in Chichester harbour. Over the years there have been many theories about what happened to him: his throat was cut by a Soviet frogman; he was caught by the Russians and taken to Moscow; he defected to the Soviet Union.

Crabb was a war hero who had trained as a diver during World War II and won the George Medal for his work in clearing mines in Gibraltar Bay. He was also awarded the OBE.

But, in common with many other men who’d had a ‘good’ war, he had found peacetime more of a problem. He worked on an underwater film and took part in a dive to search for the wreck of one of the lost ships from the Spanish Armada.

Then he rejoined the Navy for three years but when he left, he found it difficult to earn money. He was surely joking when he told a friend he briefly held a job as a model for a jock strap manufacturer, but his career had certainly stalled.

By March 1956, Crabb was depressed and drinking heavily. He was slipping deeper and deeper into debt, so there is little wonder that he jumped at the offer of £100 from MI6 to carry out the dive under the Soviet ship.

In many ways, as John Bevan — an expert on the mysteries surrounding Buster Crabb — acknowledges, he was an odd choice for the MI6 mission. He had never been much of a swimmer, and now he was 47, he was unfit, he smoked and he drank like a fish.

His personal life was also a mess. A short-lived marriage had ended in divorce. There were rumours of a rubber fetish. One navy colleague claimed that he wore a pink ladies’ mackintosh under his uniform. ‘He rustled like a Christmas tree,’ his ex-wife supposedly said.

He prepared himself for his secret mission by boozing with friends until the early hours of the morning so, as John Bevan argues, no elaborate conspiracy theory is needed to explain Crabb’s subsequent death. 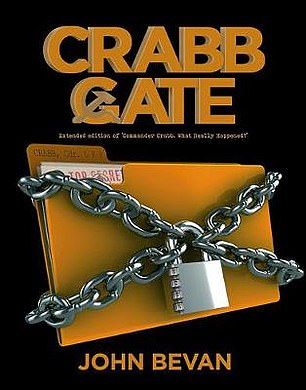 ‘His lack of physical fitness, his advanced age, his drinking sessions the previous evening with consequent hangover, his dehydration, his heavy smoking, his lack of breakfast, the cold water’ combined to create a ‘recipe for disaster’. In all likelihood, Crabb died through drowning brought on by exhaustion.

The Admiralty and MI6 made a botched attempt to cover up the disastrous venture.

For more than a week after Crabb’s disappearance, there was no official explanation and the Press seized upon the story. (Peter Marshall, a young reporter for the Daily Mail at the time, provides a foreword for Bevan’s book.)

Eventually, the Admiralty released a statement claiming that Crabb had failed to return from a dive to test ‘certain underwater apparatus’. This was a lie, of course. It was too little, too late. Questions were asked in Parliament about what he’d been doing and how much Anthony Eden’s government knew — much to their embarrassment. They’d known nothing.

Even the discovery of Crabb’s body, which Bevan believes was ‘planted’ by the security services to stop speculation about whether or not he was still alive, failed to bring the controversy to a conclusion.

There must be more revelations about the case to come. Astonishingly, some files in the National Archives relating to it are classified until 2057. Until then, John Bevan’s book provides the best available explanation for the mysteries of ‘Buster’ Crabb’s last dive.