A Welsh Muslim woman who claims she’s been branded a ‘suicide bomber’ on the street has dedicated her life to fighting racisim – and training as a skydive instructor.

Molecular geneticist Sahar Al-Faifi, from Cardiff, has given up her job in the NHS to become a full-time anti-Islamaphobia campaigner.

She features in new BBC3 series Young, Welsh and Pretty Religious, in which she reveals her passion for skydiving, which she brands a ‘niqab-friendly sport’.

Sahar explained that she chooses to wear the traditional Muslim veil as, to her, it’s an act of worship and devotion. 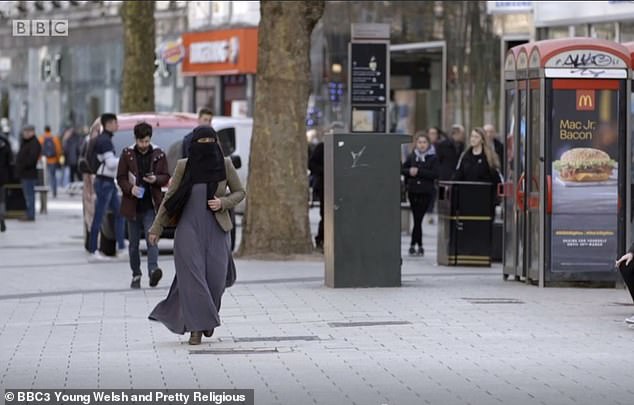 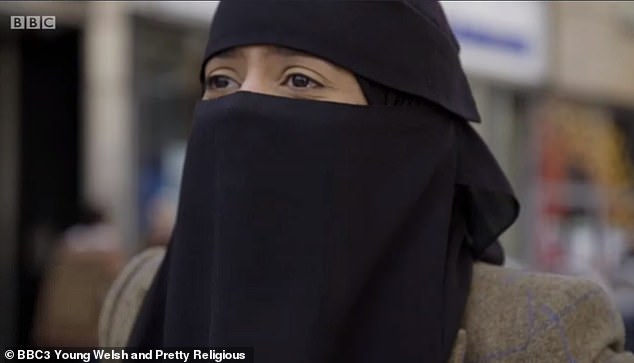 The molecular geneticist, from Cardiff, has given up her job in the NHS to become a full-time anti-Islamaphobia campaigner

She said it is very important to her to fight stereotypes and prejudices about her religion in Britain because she is ‘suffering from it’.

As a result, she has given up her job at an NHS cancer diagnostics lab to take a two-year career break to become a community activist.

‘I have been verbally and even physically abused in the street because of constant negative stories about us, about women of colour, women of faith, and it’s painful,’ Sahar admitted.

‘It’s excrutiating when someone tells you, “You’re an F-word bomber, go back to your country.” I’m like no, I’m from Cardiff, Wales is part of me and I’m part of Wales. 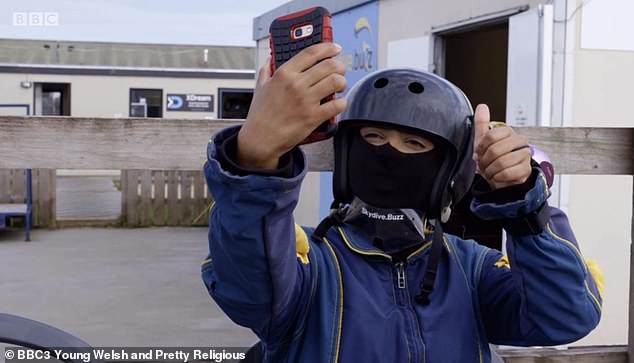 ‘I’m a proud Welsh Muslim and you’ve got to accept me for who I am.’

‘The last thing they expect is for a Muslim veiled woman to do crazy stuff,’ she joked.

‘Especially as there’s so many stereotypes and prejudices against us, like we are uneducated, isolated, we can’t go about our daily life unless someone gives us permission, and that we are like slaves in a modern day [society], which is false.’

Having completed a number of tandem skydives, Sahar said she wanted a bigger challenge and decided to complete the eight levels of solo skydiving to become a licensed diver and instructor. 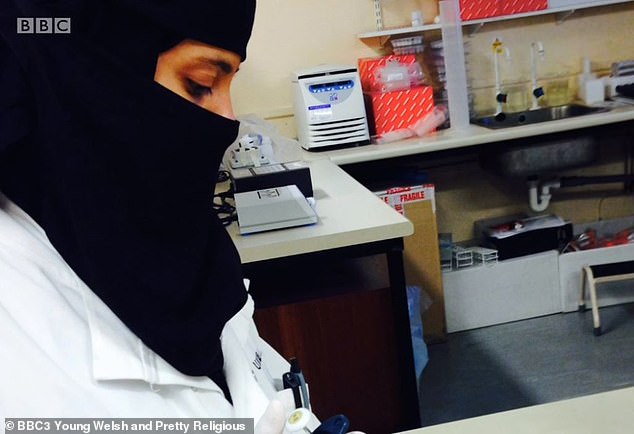 As she prepared for her first solo dive, dressing in the suit, helmet and a snood which acts as a face veil, Sahar admitted she was ‘frightened’.

Afterwards she is elated and exclaimed: ‘I did it, I feel like crying, it was phenomenal!

‘I thought the angel of death would come to me, but God said,”No, she’s got so much work to do.” I’m not going to stop now, I’m going to be an instructor.’

She added: ‘Wearing the niqab is not an easy choice. There are certain energies that have been painted about someone that looks like me.

‘At the same time I think I can do my part in explaining and breaking down these stereotypes just by being me. It’s totally my personal decision to wear the face veil as an act of worship, an act of devotion.’ 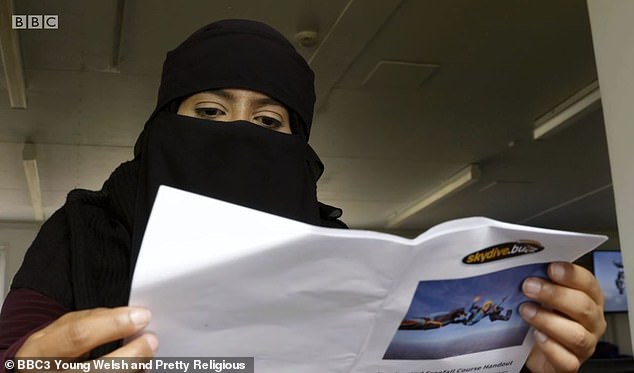 Sahar, pictured preparing for her first solo skydive, admits wearing the niqab is not an easy choice for her 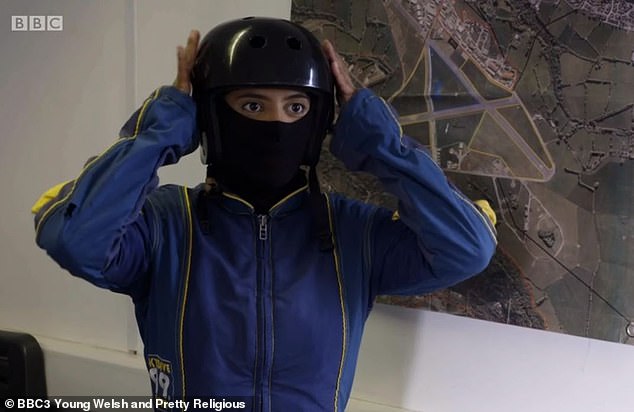 As she gets ready for her first solo dive, dressing in the suit, helmet and a snood which acts as a face veil, Sahar admits she is ‘frightened’

In the second episode of the series, Sahar goes into more detail about her anti-racism campaigning.

She previously appeared on Good Morning Britain, where she accused Boris Johnson of fuelling intolerance of women like her and leaving them open to attack following his comments about women wearing niqabs looking like ‘letter boxes’ or ‘bank robbers’.

Sahar argued on the show: ‘This is deeply embarrassing for us – you are forgetting there’s a human being behind this.

‘He is criminalising us in public life. He has a negative impact on us and makes us feel unsafe in the street. I have faced verbal and physical abuse.

‘I was speaking to a woman recently and she was physically assaulted – her niqab was pulled off in the shop she worked in… she said she felt she had been sexually assaulted. She was left feeling as though she was naked in the street.’ 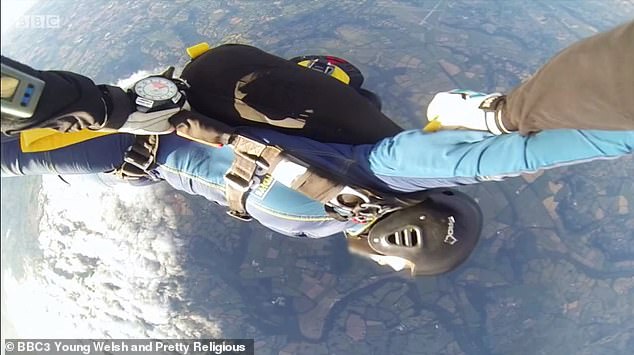 Despite her nerves, Sahar managed to complete her first ever solo skydive on Young, Welsh and Pretty Religious 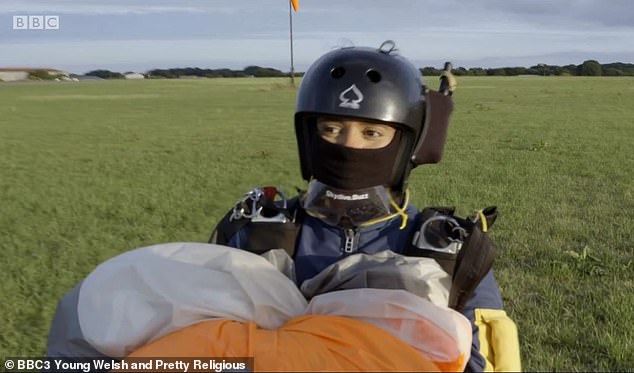 Afterwards Sahar says she is elated and exclaims: ‘I did it, I feel like crying, it was phenomenal!’

On the BBC3 programme, Sahar revealed that after appearing on the ITV daytime show, she was subjected to a barrage of racist remarks online.

In response to her comment that ‘freedom of speech does not mean freedom of hate and bigotry’, one troll tweeted her: ‘Yes it does you dumb f*****g c***.’

‘Basically [they said] I don’t belong here, I need to be deported,’ Sahar deduced. ‘This is horrendous. People still think that I’m a suicide bomber, not a human being.’

Sahar became emotional, adding: ‘It’s hurtful when someone sees you as a criminal and a suicide bomber who wants to kill other people. 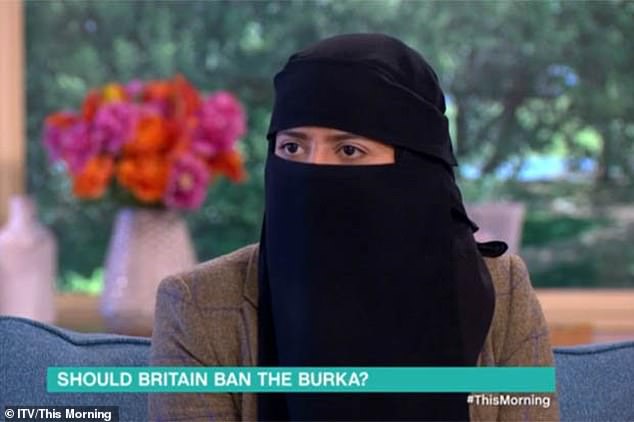 ‘It’s really painful, I’m trying to cope with it and I cannot believe that there are people out there who think of me as this, because it’s sad. I am really not a suicide bomber.’

Shockingly, a man then walked past Sahar and shouted at her to ‘take off your mask’.

‘He just abused me,’ she said. ‘That’s unbelievable.’

Young, Welsh and Pretty Religious airs on BBC One on Tuesday 28 May and is available as a box-set on the BBC iPlayer now.