Do you have ‘tech neck’? The VERY real danger of leaning over a phone or computer all day long – and how to heal your unsightly ‘hump’ fast

Thousands of Australians are at risk of developing ‘tech neck’ as more spend countless hours scrolling on phones and hunched over computers.

New research commissioned by the Australian Chiropractors Association (ACA) revealed the pandemic has caused a huge spike in mobile device use, leading to more people developing ‘hunches’ in their necks and backs.

The term ‘tech neck’ refers to the tilted position your head is placed in when looking at a phone or tablet – and over time can lead to poor posture, chronic pain, severe upper back spasms, early onset arthritis in the neck and a pinched cervical nerve.

Looking down at your phone at a 60 degree angle can place up to 27kg of weight through the spine, causing an increase in the mid-back curvature.

Sydney woman Trudi Yip, 51, is one of many who has experienced this firsthand due to spending 12 hours a day desk-bound at work. 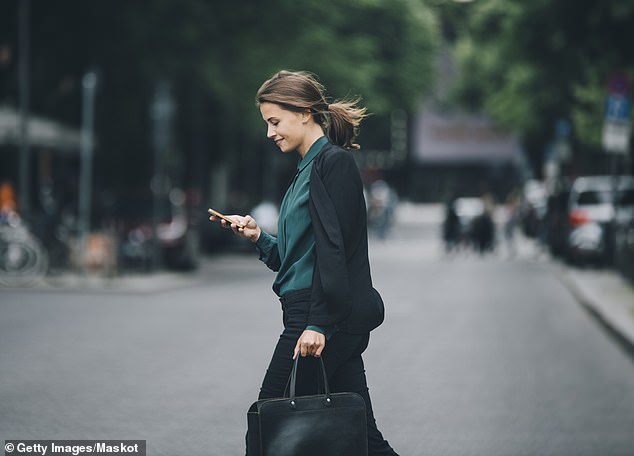 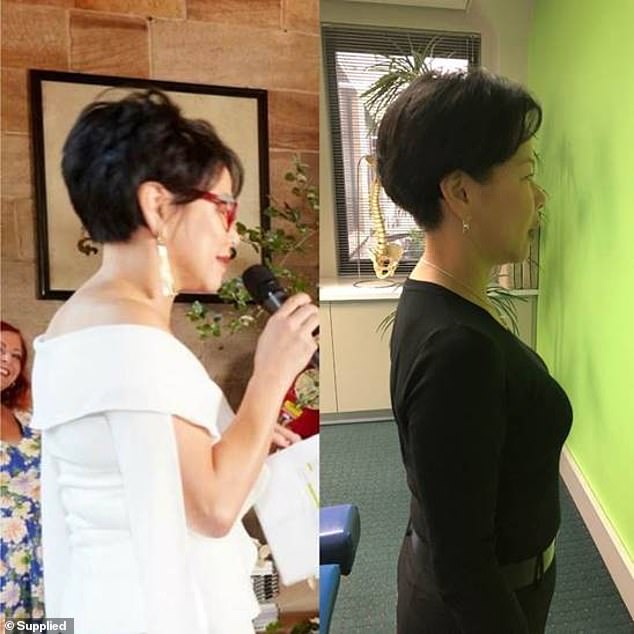 Sydney woman Trudi Yip is one of many who has experienced this firsthand due to spending 12 hours a day desk-bound at work. In 2018 she noticed a curve in her neck (pictured, left) and it took up to 12 months to reverse her ‘tech neck’ (pictured, right)

Trudi told FEMAIL she first noticed a curve in her neck in 2018 prior to launching her book.

‘At the book launch I had a profile photo taken of myself and when I saw the photo I thought: “Oh I look like an old person!”,’ she said.

Trudi also experienced awful monthly headaches that left her bedridden for an entire day due to the built-up pressure from a 70-hour work week.

To regain good posture, Trudi visited the chiropractor once a week for eight weeks to realign her spine, neck and hips, followed by monthly appointments for six months.

During this time, she changed her habits at work by getting up from her desk regularly, pushing her shoulders back and completing body stretches.

Trudi first started noticing a difference to her neck after six months and stopped having headaches within 12 months.

She suggested those wanting to improve their posture should opt to see a chiropractor, physio or neuromusculoskeletal expert once a month.

Do you have a neck hump? Osteopath reveals his quick three-step trick for resetting your posture

In a now-viral video, Canadian osteopath, Brandon Talbot, demonstrates the exercise where you interlock your fingers behind your head, tuck in your elbows and slide them up a wall towards the ceiling stretching out your spine.

Mr Talbot recommends doing the exercise a few times a day to get the desired results and said anyone who struggles to do the exercise against a wall can do it kneeling down over a bench. 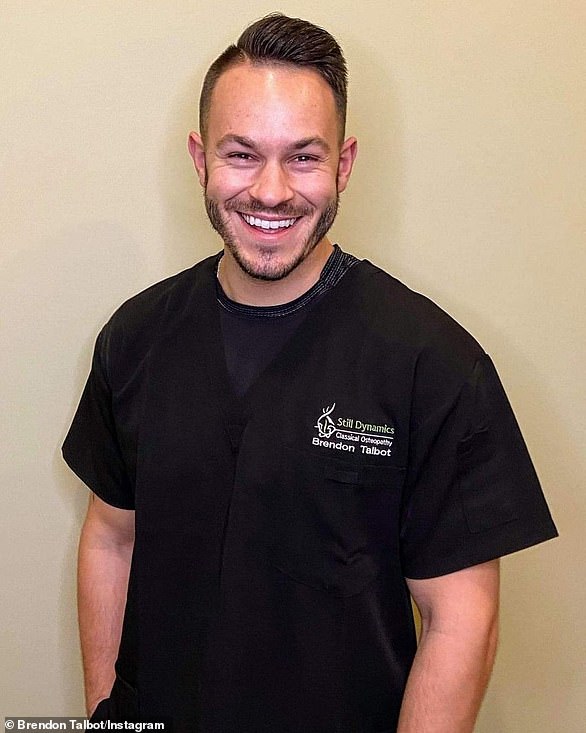 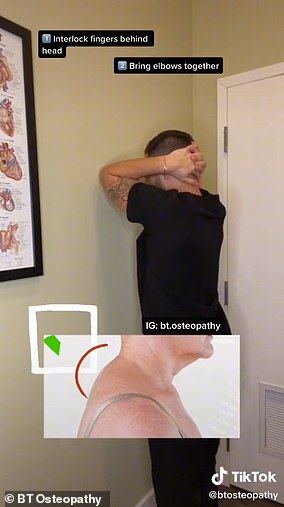 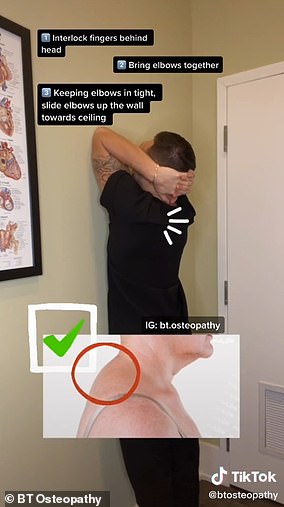 The exercise involves interlocking you fingers behind your head, tucking in your elbows and sliding them up a wall towards the ceiling

Over the past year, Australians have experienced many neck-related health issues, which have impacted the quality of life, mental health, concentration levels and general wellbeing.

Almost a third (30 per cent) of Australians said that on average, every hour they reach for their phone between five to 30 times, and one in ten admitted to doing so 40 times or more.

To maintain a healthy spine, experts suggest taking a brief break every 30 to 60 minutes to stand up and move around – but many workers admitted they don’t take these recommended breaks.

An astonishing 41 per cent of Australians working from home take regular (at least every hour) breaks.

How to prevent ‘tech neck’

Take 20/20 breaks – when using your phone or working take short, 20-second breaks, and every 20 minutes to stand up, move and stretch

Start in a seated position with your shoulders relaxed, look straight forward, place a finger on the chin

Without moving the finger, pull the chin and head straight back until a good stretch is felt at the base of the head and top of the neck (there should now be some separation between the chin and finger)

Change how you hold your phone – bring the screen to eye level so your head is not slouched forward or too high. Instead, keep a neutral spine so your ear is in line with your shoulders

Consider your sleeping position and set up – if you sleep on your stomach and wake up with a stiff/sore neck consider switching to side sleeping. Having the right sleeping setup also matters, try and opt for a firmer or higher pillow. You may also find it easier to have a second pillow to cuddle to prevent you from rolling back to your stomach

Stay active – include regular walks in your day, minimum of five minutes, every hour

In order to avoid ‘tech neck’, ACA has developed a five-step cheat sheet for Aussies to take better care of their neck health.

Experts recommend a 20/20 break system by taking 20-second breaks from your phone or desk by standing up every 20 minutes.

To promote good posture, they also recommend a ‘chin tuck’ movement to ensure your neck is in an ideal position.

To do this, start in a seated position with your shoulders relaxed, look straight forward and place a finger on the chin.

Without moving the finger, pull the chin and head straight back until a good stretch is felt at the base of the head and top of the neck.

Hold for five seconds if possible and bring the chin forward again to the finger, then repeat.

It’s also important to change the way you hold your phone or alter your sleeping position if necessary.