It’s hard to lose Joan Didion. I never met her, but she was always in the background, an elfin woman with an unflinching eye, teaching me about writing.

A very young Jennifer Byrne, just back from a stint as San Francisco correspondent for The Age, introduced Didion to me. I was a young reporter finding my feet as a writer of what were called “colour pieces”. I knew a bit about the New Journalism that had turned conventional reportage upside down, and its male heroes: the flamboyant Tom Wolfe, the possibly unhinged Hunter S. Thompson. But where were the women in this exciting movement?

There was just one. At that time she’d written three novels and two books of extraordinary essays. I’ve just reread one of her earliest, Slouching Towards Bethlehem (later the title of her 1968 essay collection), about the hippies in San Francisco. My jaw drops all over again. For the most part, all she does is hang around the Haight-Ashbury district, meeting the renegades and runaways, watching them take drugs, fall sick, go on bad trips and bounce back again. The girls do a lot of macrobiotic baking. They accept Didion’s presence in a condescending way. She tells one boy she is 32. “Don’t worry, there’s old hippies too,” he says. 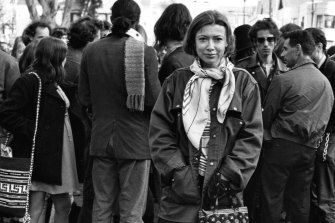 Joan Didion mingles with a crowd of hippies in San Francisco’s Golden Gate Park in 1967 while researching her essay Slouching Towards Bethlehem.Credit:Ted Streshinsky/Corbis/Getty

They are all very young, vague, sweet and dangerous to each other. By the time I get to one of Didion’s rare comments – “We were seeing the attempt of a handful of pathetically unequipped children to create a community in a social vacuum” – I know exactly what she means. She ends the essay calmly and unsensationally, with a three-year-old who sets himself on fire and a five-year-old on acid. Her mother has been giving her acid and peyote for a year.

In the 2017 documentary The Centre Will Not Hold, her nephew Griffin Dunne asks her about the moment when she found that little girl. I expect sorrow and remorse. The aged face lights up. “It was gold,” she says. “You live for moments like that.”

Didion went on to write more novels, screenplays, plays and memoirs, but above all many essays portraying the times, where what she observes so keenly speaks for itself. As the playwright David Hare said, she made the essay do things it had never done before. When I spent a term at RMIT teaching magazine writing, it was Didion’s essays I held up as examples. 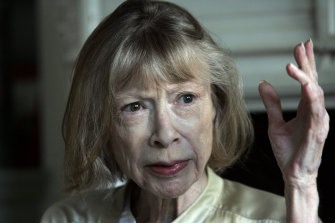 She made me realise that the boundaries of journalism were far wider than I had thought, and probably far wider than most of my down-to-earth editors thought. My generation of journalists was sternly admonished to leave the “I” out of reporting. Didion showed me that sometimes the reader needed to know where the writer was coming from.

She had been a compulsive writer since the age of five, and said she wrote “entirely to find out what I’m thinking, what I’m looking at, what I see and what it means. What I want and what I fear.”

Didion made me realise that the boundaries of journalism were far wider than I had thought.

Like Hemingway, whose sentences she copied out to get their rhythm and cadence, she blurred the margins between reportage and literature. She was one of the key influencers who led to the development of today’s genres of creative nonfiction, immersive journalism and memoir. Without her, maybe writers such as Helen Garner might not have found their form.

Didion always doubted. She took nothing for granted, including her own writing. “Setting words on paper is the tactic of a secret bully,” she wrote. Yet she believed that going through life “noticing things and writing them down” was worth doing: that even the most insignificant things had meaning and would tell us something.

There is one book of hers I was too frightened to read. The Year of Magical Thinking is a 2005 memoir that documented her experience when her husband of 39 years, the writer John Gregory Dunne, collapsed and died of a heart attack when their daughter Quintana was in ICU with pneumonia. For years afterwards, I could not face her raw vision, particularly when my husband died. I didn’t want to know about the craziness of grief, the impulse that drove Didion to leave out shoes for a man who was never coming home.

“Grief turns out to be a place none of us know until we reach it,” she wrote, and how right she was. And what follows is “the unending absence … the void, the very opposite of meaning, the relentless succession of moments during which we will confront the experience of meaninglessness itself”.

Didion was always the last person to offer false comfort, and I wasn’t ready to read about such loss. But now that the world has lost her, perhaps that time has come. My new year’s resolution is to read The Year of Magical Thinking.