WITH lockdown restrictions gradually easing in the UK and more Brits returning to work, the furlough scheme is going to be wound down.

The government 's coronavirus job retention scheme has allowed those unable to work due to coronavirus to claim 80 per cent of their normal wage up to £2,500 a month – but when will it come to an end? 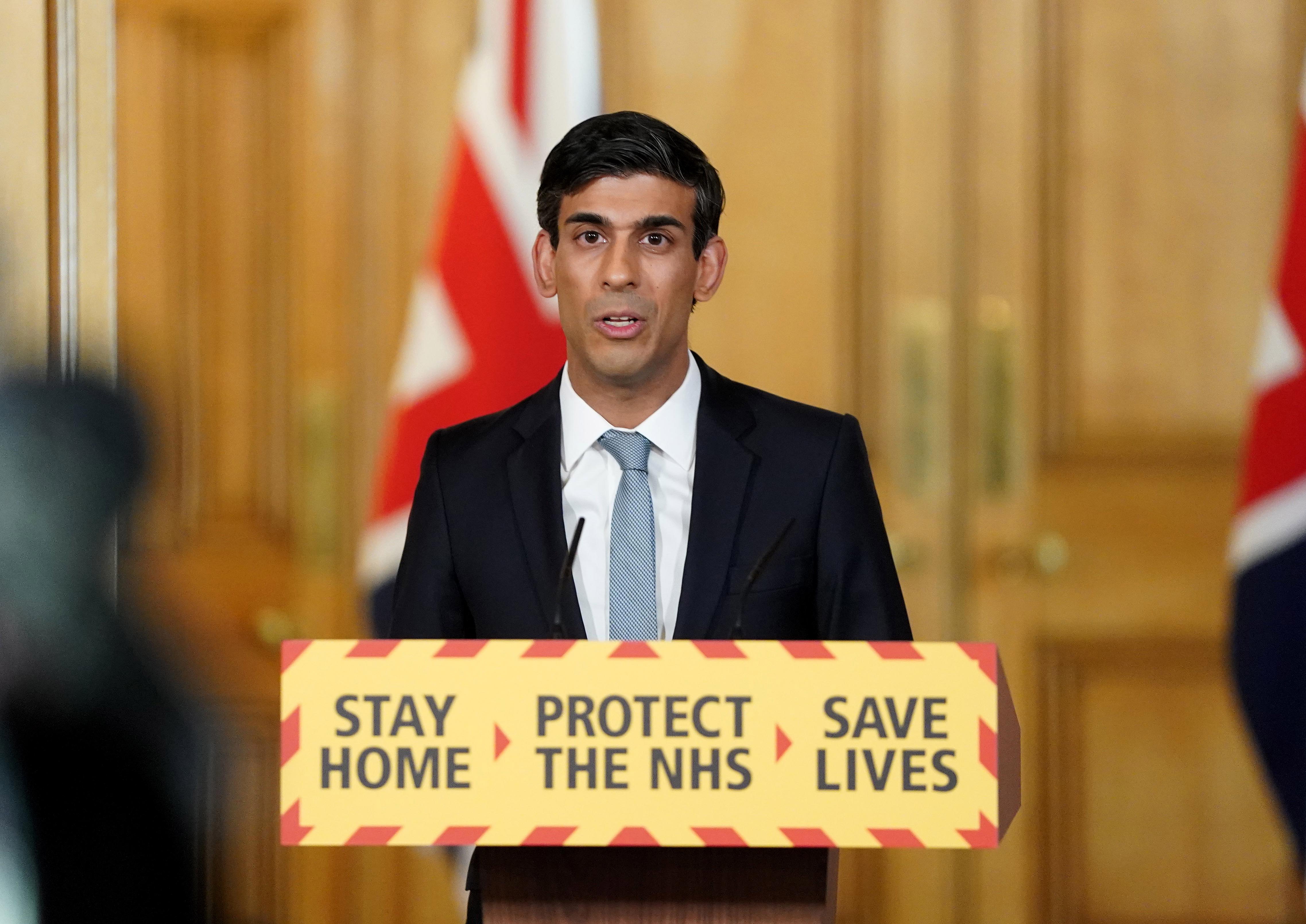 What is the government furlough scheme?

Simply put, if your employer has been forced to close temporarily due to coronavirus, it can claim 80 per cent of your wages, which it will then pay to employees.

Claims are, however, capped at £2,500 a month for each employee, so if you usually earn a lot more than that you'll see a bigger drop in wages.

Your company can top up the remaining money you'd usually be paid, but most businesses are taking a serious hit and have chosen not to.

Bosses can also currently claim employer national insurance contributions and minimum automatic enrolment pension contributions on top for wages up to £2,500 a month, although this is due to end soon.

The scheme was first launched on March 20 but it was backdated until March 1.

More than 9million workers have been furloughed, although new applicants were prevented from joining the scheme from June 10.

How is the furlough scheme changing?

The government announced a shake-up to the furlough scheme in June that will see a number of changes come into force from July 1 onwards.

From July 1, bosses can bring furloughed employees back to work for any amount of time and shift pattern, and still claim furlough payments for the time they are not working. 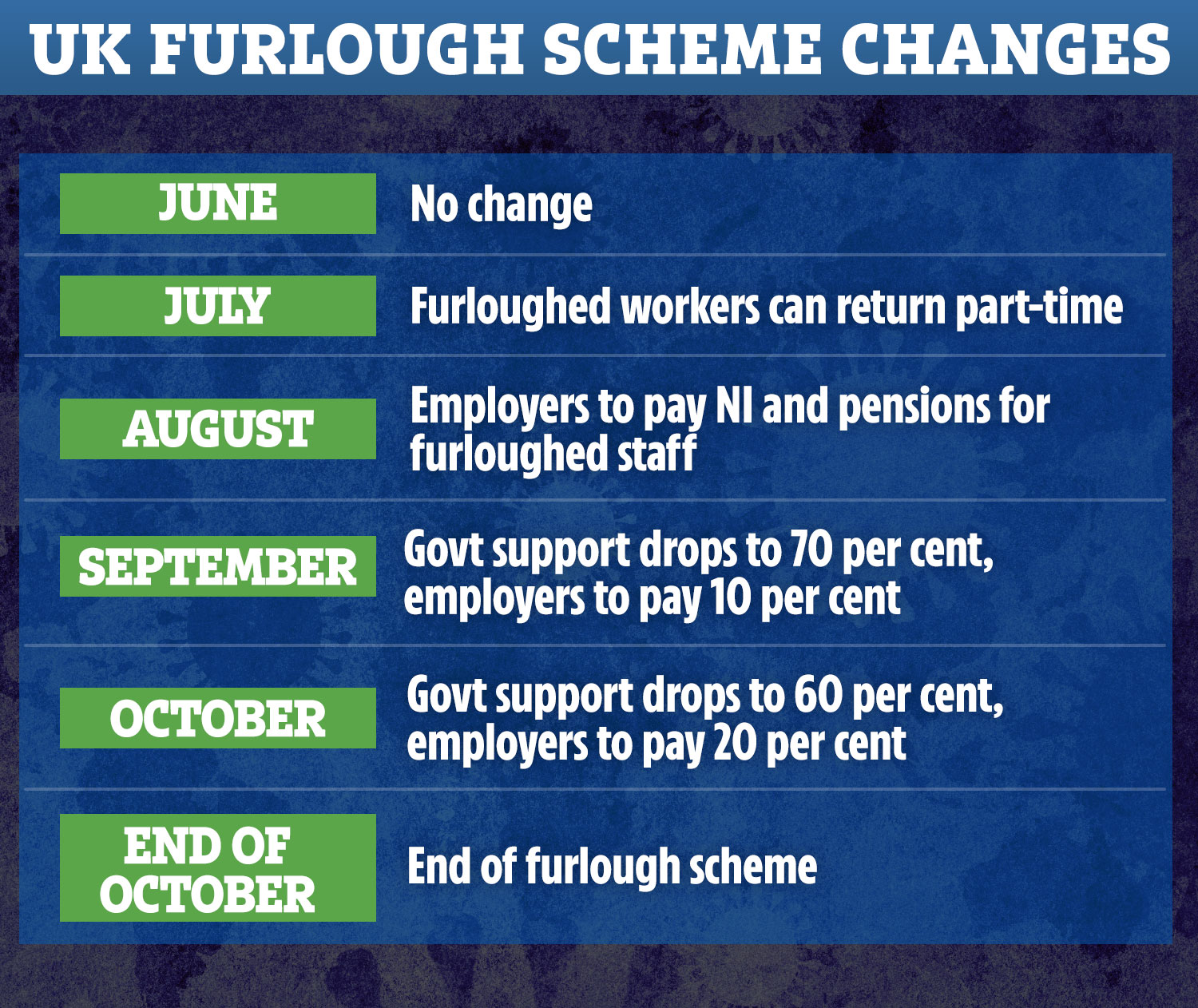 Before July 1, workers weren't allowed to work for their own company while on furlough, and they also had to have been furloughed for at least three weeks at a time before working for their firm again.

In addition, from August employers will have to contribute to wages, initially by paying national insurance and pension contributions.

From September, employers will have to pay those contributions plus 10 per cent of salaries.

Then from October they will have to pay those contributions plus 20 per cent of salaries.

How does the furlough scheme work?

ANY UK organisation with employees can apply to furlough their workers, including businesses, charities, recruitment agencies and public authorities.

It’s up to your place of work to apply to the scheme, meaning you won’t need to contact the government yourself.

To access the scheme, your employer must comply with the following:

To be furloughed, you must have been on a payroll on March 19.

Workers can ask previous employers to rehire and furlough them, even if they left for another job, but firms don’t have to do this.

The furlough scheme did, however, close to new applicants on June 10.

When will the furlough scheme end?

When chancellor Rishi Sunak first announced the furlough scheme on March 20, it was due to end on May 31.

The government then announced on April 17 that it would be extended by a month until the end of June, 2020.

Fast forward to May 29, and Mr Sunak revealed that the furlough scheme would be pushed back again to end on October 31.

Taxpayer subsidiaries will drop and employer contributions will increase gradually until then.

It comes as the Office for National Statistics (ONS) estimates furlough is costing around £8billion a month.

But there are concerns many struggling companies will lay off staff without the security of government-backed cash.

Under current employment laws, companies have to give 45 days notice before cutting roles.

CORONAVIRUS CRISIS – STAY IN THE KNOW

Don't miss the latest news and figures – and essential advice for you and your family.

To receive The Sun’s Coronavirus newsletter in your inbox every tea time, sign up here.

Get Britain’s best-selling newspaper delivered to your smartphone or tablet each day – find out more.

Earlier in April, the qualifying date workers had to be employed on to be eligible for the scheme was extended from February 28 to March 19 – benefitting up to 200,000 extra workers.

But thousands of workers are missing out on furlough pay due to aloophole.

We've put together a guide to how furlough affects you, including pay, annual leave rights and how it works if you're on maternity or sick leave.