Every week, we send a couple on a blind date. This time, Joe Cockerline, 27, had lunch at The Jones Family Project, in Shoreditch, East London, with Jessie Pettit, 25. 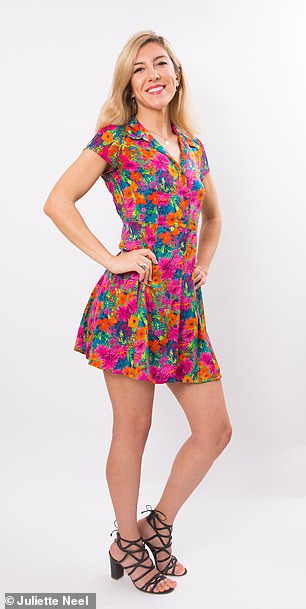 Jessie Pettit, 25, (pictured) is a media producer from West London

As an American who has been told I can be sassy to a fault — or, as Brits would say, feisty — not much fazes me, so I don’t get nervous about dates.

I think I’ve got something in common with the Duchess of Sussex, as, like her, I moved to London (in my case four years ago) because I like British men!

During that time I studied film production and had three relationships with British guys; you can’t beat an English gent.

The only blot on the male British copybook is snacking. I’m a health nut and if I see people eating crisps, I cringe. And British men do like their crisps.

While I’d love to find romance, work has had to come first. I’m a media producer, which means I regularly do 16-hour days. Unsurprisingly, relationships often don’t work out because of this.

When I arrived at the restaurant, Joe was already waiting for me. Immediately I could sense he was a good person; he’s one of those nice guys who puts you at ease.

He ticked all my usual criteria. I like a man with good fashion sense, clean hands (you’d be surprised!), a successful career and yet who is a bit quirky, too.

Joe is originally from the North-East and has an incredible accent. We didn’t stop talking, and he was amazed I could understand what he was saying.

He was gallant in letting me try his dessert, and when I preferred his to mine, he was happy to trade his sorbet for my coconut cake. I give him a big tick for that gesture alone.

Given his smart appearance (he looked like he’d come from work), I was surprised to learn he used to be in a band and still plays guitar. I play, too, because music is a big part of my work. With these things in common, we were a good match.

He was great fun to hang out with, and I suspect people would struggle to find anything bad to say about Joe. I couldn’t — although I did laugh when he confessed that he harbours a passion for Lord Of The Rings. It was a brave thing to admit on a date.

My last relationship with a British guy ended six months ago and I haven’t given myself a deadline to marry. Joe is friendly and an incredibly charming guy. While the sexy spark wasn’t there for me on our blind date, I’d love to hang out with him as a friend. But who knows what will happen after a Friday night drink?

Liked? Joe is easy to talk to.

I’ve been single for the past 18 months, as I needed some time to focus on my career. But now that everything is sorted at work, I’ve realised it would be fun to meet someone. All my friends are starting to settle down too, and I don’t want to be the last man standing.

Though I was nervous about the prospect of the date, on the way to our rendezvous, I felt oddly confident, too.

I was pleasantly surprised to find I’d been matched with an American woman. I’ve dated someone from the U.S. before, and while there aren’t huge differences between British and American women, the latter do tend to be very chatty and open.

My impression of Jessie was that she was lovely. We kicked off with cocktails and the conversation flowed over dinner.

I’d divide the date up into two halves. The first was the standard questions where you ask each other about basic things, from jobs to family.

Then the second half was the more personal questions, finding out what made one another tick. It was great to discover that she’s a creative person and a music lover. I told her about my family in the North-East, who I’m still close to. It felt like we connected well as we chatted away.

When I’m in a relationship, I try to prioritise my partner. I can be messy to live with, but I make up for it in the kitchen. I love making bread — call me a young Paul Hollywood! I saw someone for three years after university and had a girlfriend at work. I ended with the first because I needed to focus on me. As for the second, going out with someone at work has its pluses and minuses; you both want to be seen as individuals rather than the ‘office couple’.

I was struck by Jessie’s confidence. She knows what she wants and is attractive and funny, too. We went on to the restaurant bar and had another bottle of wine.

At the end of the evening, I asked for her number. I’d love to see her again and like to think there was chemistry. While I’d like it to be romantic, if it’s just as friends, so be it. Either way, it would be great to spend more time with her.

Regrets? I should have stopped before the last drink. I had a bad head the following day.