Who’ll find love on our virtual date? This week it’s Bernadette, 35, and Greg, 37, but will romance be on the cards? 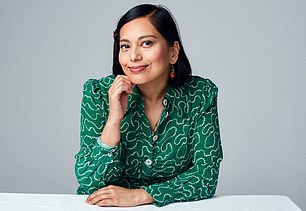 Bernadette, 35, (pictured) has been single for three months

I’ve never found a man who offered much consistency, so now reliability is a must. I’ve just come out of a six-month long-distance relationship which never really got serious.

A man with a boyish face but masculine personality. I love the Mediterranean look.

I did some speed dating in 2019, which was fun but led to nothing. I’m one of those rare people who loves internet dating.

I was nervous, so I got dressed up in my favourite navy dress and jewellery. I made sure my Chinese takeaway arrived by 7.45pm, even though the restaurant is just next door, so I had plenty of time to get settled before our 8pm date.

Greg’s meal was delayed so he was 15 minutes late. He didn’t apologise, but let me know by text. It wasn’t ideal as I had eaten most of my dinner before the date.

Greg has a kind smile, but he’s not my type — he has longish hair and I prefer a manly look. Still, he was smartly dressed in a grey shirt and I liked that he had set up his table to make it look like a proper date.

EASY TO TALK TO?

He was friendly, witty and had plenty of stories. He told me about how he got into computer modelling, and he is clearly close to his family, especially his cousin — he even lives next door to his aunt.

Liked? He has a good sense

Regrets? I wish we had eaten together.

See him again? Probably not

We have both watched more TV during the pandemic than ever before, and we have similar guilty pleasures — I love Made In Chelsea, while Greg is a Love Island fan, which I find surprising in a man.

He said he wasn’t keen on dating, but I believe you have to put yourself out there. I’m not going to find anyone if I don’t look.

He didn’t eat much, and eating by myself was uncomfortable.

I didn’t think he was flirting, but afterwards he said he wanted to post me a gift. He sent me a book about cats, which was sweet as we had talked about my love of them.

If we bumped into each other I’d go for a coffee, but given how few people we can meet at the moment, there is no point in trying to meet up as I don’t foresee any romance.

WHAT DO YOU THINK HE THOUGHT OF YOU?

I’m not sure, but we had a lovely evening. Sometimes that’s enough.

He’s interesting so he’d get on with most people. My family would like me to settle down, so they’d be friendly to anyone who was lovely. 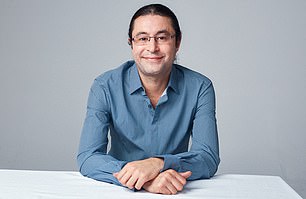 Greg, 37, (pictured) has been single for ten years

Someone normal! I enjoy the company of women who are intelligent and kind. Looks aren’t as important to me as personality.

A stand-up comedian once said dating was invented by the U.S. to sell ice cream and cinema tickets, and that we English rely instead on meeting people in the pub or at the office. That’s what I’d like to do — I hate the idea of going on manufactured ‘dates’.

Sadly, it hasn’t worked for me, and I haven’t been in a relationship since university. In these strange times, I thought I would try something I’ve never done, which is why I applied for a blind date.

I was nervous, but I think that’s healthy. I wore a smart shirt and jeans, and thought about adding candles and background music, but decided against it.

Bernadette was elegantly dressed and has big, brown eyes and a beautiful smile. She looked lovely — though I spent most of the evening speaking to her shoulder due to her camera angle. I couldn’t bring myself to tell her. I also found it weird eating in front of a screen, so I didn’t touch much of my Chinese takeaway.

EASY TO TALK TO?

Bernadette is an impressive woman — it’s incredible that she is at such a high level in her career and still has time to play the piano at Grade 8 standard.

Liked? She’s a good conversationalist, so I enjoyed talking to her.

Our conversation was wide-ranging and full of laughs. I just hope I didn’t bang on about myself too much. We reflected on how we have both ended up in the same place relationship-wise despite taking different paths.

None, thankfully, as I decided not to eat my pork ribs in front of her.

Bernadette is delightful, but on a first date it would be far too early to speculate. I’m not a flirty person, but it felt relaxed.

I would be happy to go for a walk in the park with a coffee and get to know her better.

WHAT DO YOU THINK SHE THOUGHT OF YOU?

She was friendly and inquisitive, and I think we appreciated each other’s company. If nothing else, I hope she enjoys the cat book I sent her as a gesture to say how much I’d enjoyed the evening.

She would fit right in. After a sad 2020, it was wonderful to talk to someone new.

Would you like us to find you a date ? Fancy a date with an eligible single like you? Or would you like to play cupid for someone else? Email your — or their — details and a photo to [email protected]dailymail.co.uk