Sneering broadcasters, a scorned working class, and an elite who just don’t get it: Why it’ll be deja vu for Donald in the November election as Liberal America gets trumped again, writes HENRY DEEDES

Picture a prosperous nation where the economy is going great guns; unemployment levels are down, wages are up and the stock market soaring.

Life, on the whole, is good for the many — but there is grumbling among working-class voters who have concerns about the arrogance of the governing elite, about crime in their communities, and about immigration.

The leader of this nation is a love-him-or-loathe him maverick, with unruly blond hair, a propensity to open his mouth before engaging his brain, and an infamous inability to grasp detail.

He does, however, have an uncanny instinct for the gut feeling of voters. 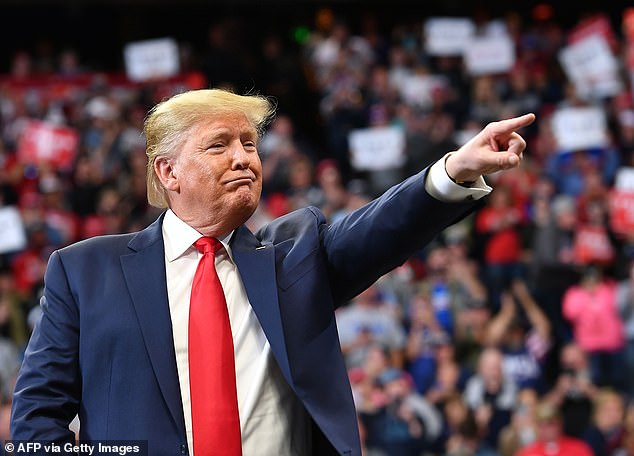 The leader of this nation is a love-him-or-loathe him maverick, with unruly blond hair, a propensity to open his mouth before engaging his brain, and an infamous inability to grasp detail, writes HENRY DEEDES 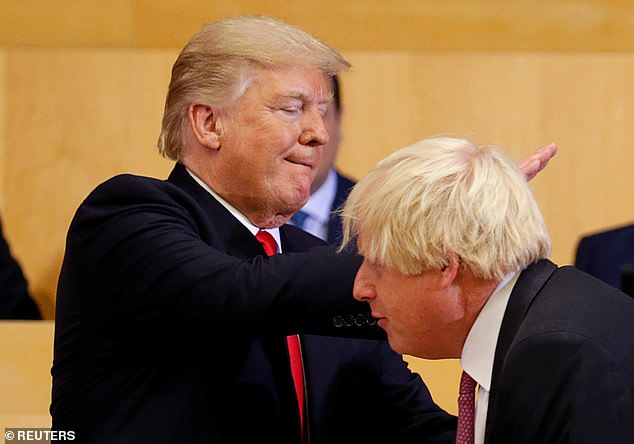 He can cut through political verbiage to the heart of the matter and connect with millions.

Meanwhile, his opponents are in disarray, as a doddery Left-wing fossil from another era, who boasts a wealth of crackpot economic ideas, is trying to seize power at the head of a disillusioned and discredited party.

Does any of this sound familiar?

No, it’s not post-Brexit Britain, of course, but America, where I have spent two rollercoaster weeks watching Donald Trump at close quarters, and speaking to scores who voted for him in 2016 and who intend to do so again.

It’s amusing to draw such comparisons, but the parallels between our nations, the similarities between our two leaders, and the bond that already exists between them, have far greater significance at this moment in our history.

At the end of this year, the reality of Britain’s departure from the EU will make itself felt. And whether or not we have secured a satisfactory trade deal with Europe, our economic future will be bound up with the U.S.

Never before has the so-called special relationship been so important.

Right now there is a genuine chance to nurture a new transatlantic alliance as warm and mutually beneficial as that between Margaret Thatcher and Ronald Reagan in the 1980s. 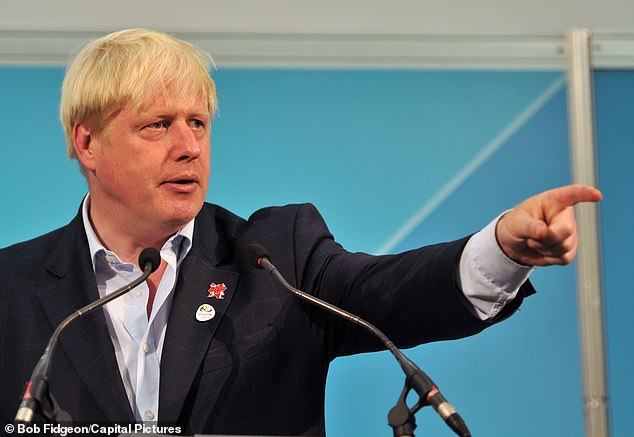 And if the thought of a Boris Johnson/Donald Trump double act doesn’t send shockwaves through the corridors of the power in Brussels, then it should.

This past week, here in the U.S. to report on the opening salvos in the 2020 presidential election campaign, has been instructive for someone whose working life is spent in the corridors of Westminster where Donald Trump is a standing joke — as he is with expat Americans I come across back home.

And when I arrived at New York’s JFK Airport it seemed to be business as usual. When an immigration official noticed I was planning to stay at one of Trump’s hotels in Manhattan. His reaction was utter disgust — I thought he would deport me on the first plane back to London.

In restaurants, bars and shops, as soon as New Yorkers heard my accent, they launched into apologies for their President — for his very existence. This might be Trump’s home town but the loathing is visceral.

Yet what a contrast just a few days later, in icy Iowa for the Democrat caucus.

Nearly every Uber driver I meet, generally hard-pressed middle-aged men or women with families to support, backs their President.

What they love is his aggressive defence of their nation, the ruthless way he’s gone about renegotiating U.S. trade deals abroad. A trade war with China? Bring it on, says The Don! 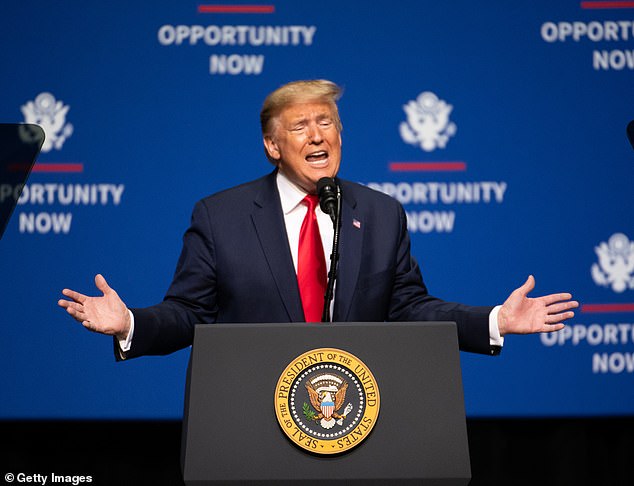 All nonsense, of course, but Trump’s blue-collar supporters lapped up this tall tale of souped-up machismo.

It was made clear to me at that rally the real reach of Trump’s appeal, which leaves his rivals in Washington open-mouthed.

One of my most telling encounters occurred in the snaking queue to get into the rally, where I met Patti Tibbitts, 60, who’d made the two-hour drive from Iowa City to cheer on the President.

She didn’t strike me as the stereotyped, swivel-eyed Trump supporter. A proud Native American, she was a demure, well-spoken, highly educated former Obama supporter. But she’d warmed to Trump over her concerns about immigration. ‘I am descended from Comanche Indians,’ she told me.

‘My forebears knew what it was like to have foreigners come in and take their country away from them. The President is strong on immigration and that’s why I’m here to support him.’ 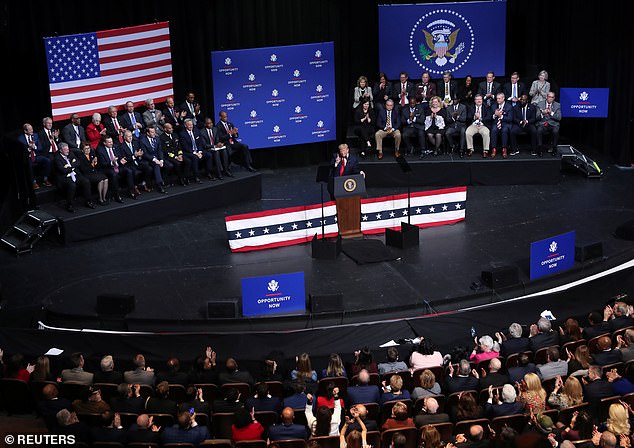 President Trump delivers a speech at a summit in Charlotte, North Carolina, on February 7

There are literally millions like Patty. Trump’s 90 minutes on stage was below-the- belt stuff.

Statesman-like he ain’t. He slagged off opponents in brutal, often personal terms, pulling faces, goading his enemies over the (at that point) almost certain failure of their attempts to impeach him.

John Heraty, a social worker who’d made the five-hour trip from Chicago, told me middle-class voters such as himself simply didn’t care about all of that.

‘He behaves like he’s in a bar-room brawl, sure, but he’s a confident guy. And that makes us feel confident.’

I had similar conversations throughout my stay in Iowa. Supporters acknowledge the boorish behaviour but shrug and reiterate that he’s addressing the issues that matter to them. ‘He’s our guy,’ is all they say.

And I remembered where I’d last heard similar comments on another campaign trail.

During the 2019 general election, I spent six weeks following Boris Johnson around the West Midlands and beyond, to traditional Labour strongholds in the so-called ‘Red Wall’ in the north of England.

Time and again, men and women of all ages, Leavers and Remainers told me Boris — an Old Etonian let’s not forget — was speaking their language and seemed to understand their concerns, about Brexit, about delivering on the 2016 referendum result, and about taking back control of our borders.

The very issues sneered at by the metropolitan Remain-dominated elite, who dismissed such voters as racist, stupid or old, and had no conception of the disconnect they felt with those governing them.

Among America’s liberal dominated mainstream media, the same attitudes prevail. After Trump’s State Of The Union address on Tuesday, in which he boasted of his (rather than his administration’s) success — ‘Jobs are booming, incomes are soaring, poverty is plummeting . . . our economy is the best it has ever been,’ he bellowed — it was a free-for-all of Trump bashing.

News channels such as CNN and MSNBC were rolling conveyer belts of talking heads, whining, sneering and bemoaning the state of the country. 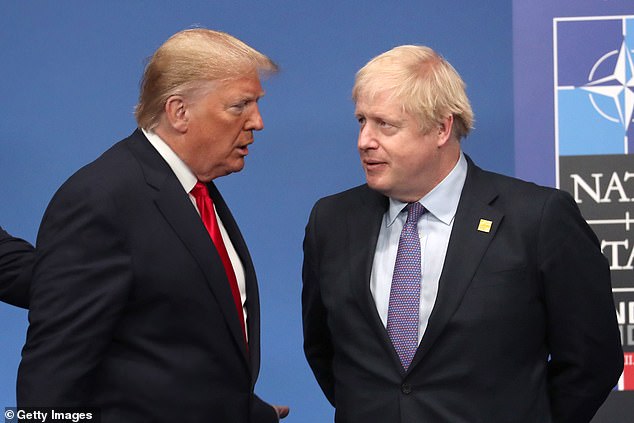 Newspapers such as The Washington Post and the New York Times upped their usual daily misery fest of preaching editorials about this unconscionable White House administration.

Yes, Trump is boorish but the coverage feels vastly overblown. As the more pragmatic Wall Street Journal pointed out this week, the liberal media revels in perpetuating the idea that the country is caught in an epic, Star Wars-like saga, with Trump as the arch villain Darth Vader and the Democrat Party as the plucky rebels.

Their fulminating grows ever more hysterical because they know they haven’t a chance of getting rid of him. And the collapse of his impeachment trial this week only added to the President’s Mafioso-like sense of invincibility.

But to attribute Trump’s sky-high job approval ratings — at 49 per cent, his highest ever — solely to the hopelessness of his opponents would be narrow-minded, though the Democrat Party is in a bigger shambles than our Labour Party.

On Monday, the Iowa caucus — the first step in choosing who will be the Democrat presidential candidate to face Trump in November — ended in farce when the results were delayed by days due to a technological cock-up in the voting system.

As I write, the result is still in dispute, though Bernie Sanders appears to have ‘almost’ tied with the surprise breakthrough candidate, Pete Buttigieg, a former mayor from nowheresville South Bend, Indiana. Neither has a cat in hell’s chance against the Trump election machine — said to be even better organised and better funded than it was four years ago.

Buttigieg, despite his compelling back story (graduate of Harvard and Oxford, gay, served in Afghanistan) seems woefully inexperienced for the task. As for Sanders, his zany politics have zero hope of taking back those floating states Trump stole during his astonishing march to the White House in 2016.

Watching 78-year-old Sanders out on the stump, stooped, craggy and unkempt, he espouses the same brand of radical Left-wing dogma as Jeremy Corbyn, and it has the same appeal to the young middle classes here who worship him.

He’s seen as the anti-establishment candidate, but they’re also seduced by his unrealistic plans to scrap university tuition fees and cancel all existing student debt.

And just as luvvie bores queued up to associate themselves with Labour at the last election, a steady supply of unctuous celebrities cosy up to back Sanders.

By the look on Bernie’s face, he’d never even heard of them.

Liberals hope deep-pocketed media tycoon Mike Bloomberg —- still to enter the race — might yet breath oxygen into the contest, but the former New York mayor looks suspiciously like shark chum waiting to be gobbled up by the Great White Trump.

One thing is certain, the Democrat establishment would prefer anyone to Sanders, who is viewed as an embarrassment among the party’s top brass.

After Iowa I moved on to New Hampshire, a chilly corner of the north-east U.S. where a thick blanket of snow spread over the leafy state. Some 16 inches are due to fall over the coming days in this Democrat stronghold.

It’s almost enough to make you feel sorry for the Party’s presidential candidates out campaigning again ahead of Tuesday’s crucial New Hampshire Primary.

The President, meanwhile, is back in Washington, still joking about his recently collapsed impeachment trial. How he flaunted for the cameras the front page of his bete noire, The Washington Post, with its ‘Trump acquitted’ headline.

He’s behaving like a man dipped in sunshine as his opponents continue to tear one another apart.

On Monday, the Trump entourage arrives here for another riotous rally. But between all the grandstanding, the swaggering and the puerile jibes there will be a reminder that his administration has fiscal success to boast about (albeit based on debt-fuelled largesse of some £1.9 trillion delivered via one of the largest ‘stimulus’ packages — tax cuts and a spending ‘bung’ — in American history).

Economic expansion is now in its 11th year, a record for the modern era. Unemployment has sunk to 3.5 per cent, down from 4.7 per cent when Trump took office, while workers’ wages are growing. As for Wall Street, the stock market is up about 20 per cent from a year ago.

Ultimately, that’s what will deliver four more years of Trump in the White House, regardless of tales of foreign influence, sexual scandals and the grandiose promises of reinforced border walls that he’s unlikely ever to deliver on.

Pure, interrupted economic growth — it’s the fuel that fires the engines that pump the pistons that drive the wheels of America. This extraordinary President knows that better than anyone.

Let’s hope Boris can negotiate a piece of it.