Alok Vaid-Menon is a picture of confidence.

The 31-year-old author and performer has toured the world sharing poetry, comedy and speeches on gender and self-expression. They’ve designed multiple fashion collections, cultivating a global movement to #DeGenderFashion. And they’ve amassed more than 1 million followers on Instagram for their compelling thoughts and incredible sense of style. The Texas-born multi-hyphenate, who now lives in New York, is not afraid of embracing neon colour and the occasional six-inch heel.

But, for the past six years, Vaid-Menon has been scared to come back to Australia. 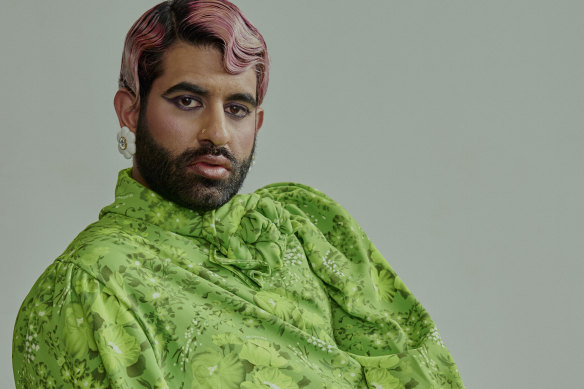 “During my last tour, in 2016, I was physically assaulted,” they say, speaking to The Age and The Sydney Morning Herald ahead of their big return. “[It happened] after one of my last keynote engagements in Melbourne, in the middle of the day.”

A man punched them in the face, after they bumped into him on the tram. And, as Vaid-Menon recalls, after the assault the man said, “I’m OK with gay people, but you’re too much.”

The author – who is gender-nonconforming, and doesn’t identify as either male or female – was wearing a pink jumpsuit and platform heels at the time.

It’s an incident, they say, that became “a real turning point in [their] life”. It left Vaid-Menon with a fear of being in public, which led them to “genuinely consider quitting [performance]”.

“After getting a standing ovation for my intellect [at the talk just hours prior], no one was actually there to protect my personhood … This is not about gender. It’s actually about humanity.”

This is part of the story Vaid-Menon will be telling on Saturday night, during a keynote at Sydney’s Festival of Dangerous Ideas in which they plan to offer forgiveness to their attacker and explain the broader need for society to embrace expressions of gender beyond the idea of “man” and “woman”. 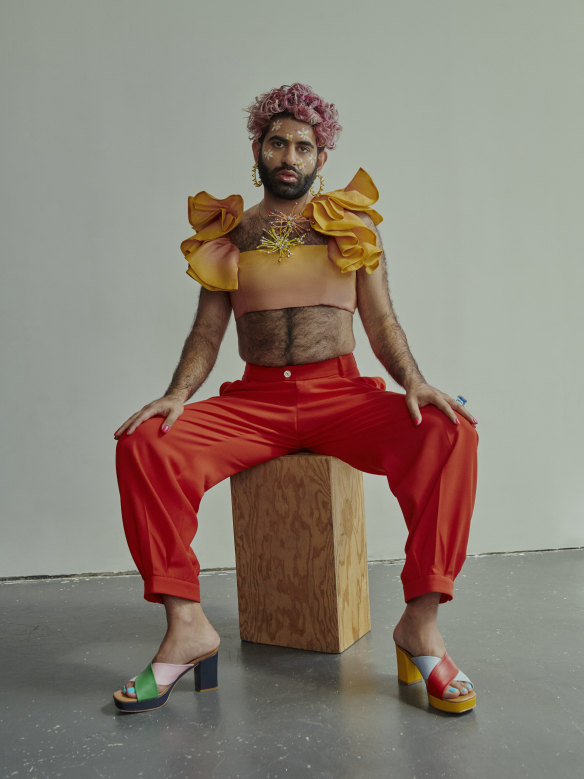 “If I had prioritised fear over love … I could have been that man on the train,” Vaid-Menon says.Credit:Eva Schwank

That doesn’t mean they’re suggesting everyone should be non-binary, or that there’s anything wrong with being a man or a woman. But rather, they say, it’s about acknowledging there are many ways of being and everyone is equally deserving of love and respect.

“[Gender is a construct which can] make us feel woefully inadequate,” Vaid-Menon says. “If you’re assigned male at birth, for instance, society says that you have to be emotionless – that you can only prove your legitimacy through your displays of power and control.

“Instead of working against the gender binary and those gender norms, [many people] misdirect their legitimate anger and grief against queer and, especially, trans people.

“As trans people,” they go on, “we have a unique point of view to teach the world that transformation is possible because we’ve worked through our own self-hatred. If I had prioritised fear over love [towards myself and others] … I could have been that man on the train.”

It’s taken a number of years – and a fair amount of therapy – for the author to arrive at this place of compassion. And they expect their Australian tour, which includes comedy/poetry shows in most of our major cities, to be a particularly emotional one.

“Trans and gender-nonconforming people anticipate violence everywhere we go. And it’s getting worse,” they say. “Every restaurant, every street, every city, every school, every place that I go, people harass me … And my story is one of millions. I’m just privileged enough to have the platform to say it.”

But that doesn’t mean it’s going to be a solemn affair. Vaid-Menon says their shows are “an equal measure of grief and loss, as well as joy and triumph” and they’ve been particularly drawn to stand-up comedy lately as “a lot of famous comics [have been] peddling transphobia”.

“[Transphobic people] think there’s something funny about what we look like, when the really funny thing is how they act – like, why they are so obsessed?” they say. “You could be spending your entire day playing Mario Kart. And instead, you’re insulting strangers online.

“Right now people think that trans people are curmudgeonly – snowflakes who are self-indulgent and hyperemotional – and that we can’t take a joke. I wanted to show that not only can we take a joke, but we can do it better than you.”

Alok Vaid-Menon is speaking at the Festival of Dangerous Ideas this Saturday and Sunday, then doing standalone shows in Sydney, Melbourne, Brisbane, Perth and Auckland through September.