Prime Minister Scott Morrison has praised Australians for paying down mortgages and boosting savings during the pandemic and sought to liken his government’s economic management to the buffer built by households as inflation rises and a rate hike looms.

But Labor says Australians are faced with a “triple whammy” of skyrocketing inflation, falling wages and rising rates and blames the government for all three. 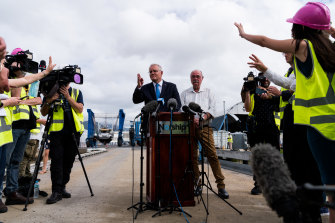 Since the start of COVID-19, households have increased their savings by $250 billion, which Treasury and the Reserve Bank expect will be tapped to help offset higher prices and any lift in official mortgage rates.

The RBA estimates the median home buyer is about 21 months ahead in their mortgage repayments, up from 10 months at the start of the pandemic.

Morrison said this had been a very sensible approach by people managing their finances.

“We got through this together because they’ve been making wise decisions and determined decisions and the government has been doing the same to back them in,” he said in Cairns on Thursday morning.

“If anything, I think what we’ve seen in the last 24 hours underscores the point that I’m making: we are not out of the woods yet.”

Official figures released on Wednesday showed the biggest jump in prices in 22 years, with inflation rising by 5.1 per cent in the March quarter.

Pressure is now on the RBA to increase interest rates from the emergency-low level of 0.1 per cent next week, instead of waiting for wages data later in the month and moving in June.

The last time the Reserve Bank moved on rates during an election campaign was in 2007, when John Howard lost to Kevin Rudd.

Asked whether he sees a reflection of 2007 in the current situation, Morrison said drawing an equivalence between the two scenarios “is to misunderstand history”.

“We are in the middle of a pandemic with a war in Europe. Those situations were not in place in 2007,” he said.

“I would argue strongly that our economic management has enabled us to put a shield up against a lot of these pressures. The pressure is still there.”

Shadow treasurer Jim Chalmers said the prime minister appeared to have “an excuse for everything and a plan for nothing” the country would face in the future.

“If the prime minister wants to take credit for things that go well in the economy, he needs to take responsibility for the fact that Australians are getting absolutely slaughtered by this triple whammy,” he said at a press conference in Sydney on Thursday.

Asked what Labor would do to drive down consumer prices, Chalmers said his party would implement cost-of-living measures after the Morrison government’s payments run out, make childcare “substantially cheaper” and support lifting wages for people in industries such as aged care.

Morrison has cited the budget measures of a six-month halving of the fuel excise, the $250 payments to pensioners and other welfare recipients, and the one-off boost to the tax rebate for low- and middle-income earners.

He pointed out the effect of the fuel excise cut was not included in yesterday’s inflation data because it did not start until the very end of the March quarter.

But he twice incorrectly stated that effect, saying: “Treasury estimated that that would actually cut the inflation by about half a per cent – that was their estimate in the budget.”

The figure cited in the budget is half that amount.

“The fuel excise reduction is expected to reduce headline inflation by ¼ of a percentage point in the June quarter of 2022,” the budget papers state.