London: Dame Hilary Mantel has died at the age of 70 after suffering a stroke, leaving behind an unfinished historical novel.

The acclaimed author of the Wolf Hall trilogy was regarded as one of the finest writers of her generation.

She spoke last year of plans to return to historical fiction.

Hilary Mantel, winner of the Man Booker Prize for Fiction, poses with a copy of her book Bring up the Bodies.Credit:AP

“I have another novel on the go but it’s too soon to talk about it,” she said, but disclosed that it was set in the 18th century, a period she visited in her 1992 novel, A Place of Greater Safety.

At the time of her death, she was working on a television adaptation of The Mirror and the Light, the final instalment in the trilogy. The first two books were Booker Prize winners, and the three together sold more than five million copies worldwide.

Dame Hilary and her husband, Gerald McEwan, recently purchased a house in Ireland and were in the process of moving from their home in Budleigh Salterton, Devon. 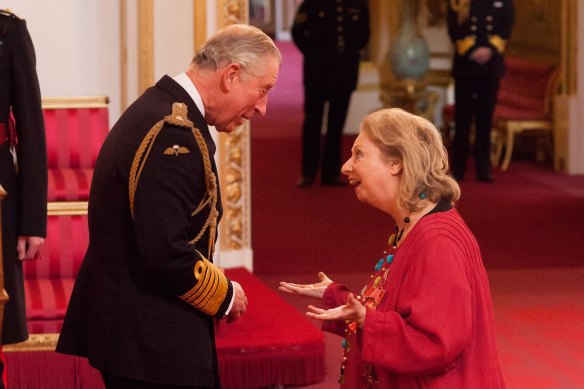 However, her agent and publisher announced that she had died “suddenly yet peacefully” on Thursday (Friday AEST), surrounded by close family and friends. She had suffered a stroke three days earlier.

In a joint statement, they said: “Hilary Mantel was one of the greatest English novelists of this century and her beloved works are considered modern classics. She will be greatly missed.”

Dame Hilary had suffered from ill health throughout her adult life, stemming from endometriosis which went undiagnosed for many years.

Bill Hamilton, her agent at AM Heath, said she was an author of “enormous generosity” towards budding writers, who “observed the world with relish and pounced on the lazy or absurd, and nailed cruelty and prejudice”.

“There was always a slight aura of otherworldliness about her, as she was and felt things us ordinary mortals missed, but when she perceived the need for confrontation she would fearlessly go into battle,” he said, adding that she dealt stoically with chronic health problems.

Dame Hilary was unafraid of controversy and in 2013 was criticised for giving a lecture in which she likened the Duchess of Cambridge to “a shop-window mannequin” and “a jointed doll on which certain rags are hung”.

She was made a dame two years later.

More recently, she spoke in support of JK Rowling, saying that the attacks on the Harry Potter author over her stance on trans issues was “unjustified and shameful”.

Bernardine Evaristo, a fellow Booker Prize winner and president of the Royal Society of Literature, said: “We were so lucky to have such a massive talent in our midst.”

“She was an extraordinary woman. A good friend and a close colleague. I feel so honoured to have known her and to have contributed in a small way to the work of one of the greatest writers of our time.

“I shall dearly miss her kindness, her humour and her gentle tenacity. The indisputable genius of her words remains as some small consolation to this tragic loss,” Miles said.

Dame Hilary’s planned move to Ireland was because she no longer wished to live in the UK post-Brexit. “Much as I love where I live now – in the West Country, by the sea – I feel the need to be packing my bags, and to become a European again,” she said last year.

In her final interview, published two weeks ago in the Financial Times, Dame Hilary was asked if she believed in an afterlife. “Yes,” she replied.

“I can’t imagine how it might work. However, the universe is not limited by what I can imagine.”