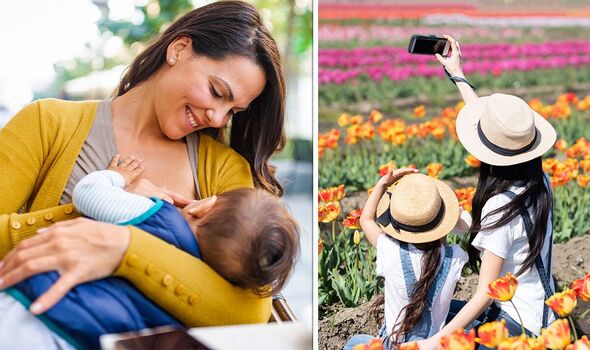 A woman shared on the social media platform Quora that her friend is still breastfeeding her six-year-old daughter and asked if it is appropriate to do so at that age. She said: “Of course, I’d leave it up to the mother and child, each individual situation is different. But, I can’t resist an anecdotal story.”

The woman went on to share the bizarre situations she often witnesses when she hangs out with her friend and her daughter.

According to the social media user, the six-year-old would yell “boobies!”, run to her mum and pull up her shirt in public places.

She recalled the time when they were queuing at the supermarket and while seated in a grocery cart, the daughter grasped the mother’s breasts and announced loudly “these are my best friends!”

The woman explained that reluctantly, her friend “began to consider weening her with nursery starting in autumn”.

By that point, the daughter “was approaching the non-lactating mothers of her playmates and tugging at whatever garments concealed their breasts,” she claimed.

The woman opined that there may be situations where a mother has delayed weening for too long, which can sometimes become a problem.

Another mother shared her opinion and explained that her youngest daughter is eight, and “I still nurse her sometimes”. When asked why so long, she replied that she just likes it, “so why should I stop? I will feed my daughter until she wants,” she said.

What do you think? Join the debate in the comments section below

Other users also shared their thoughts and experiences with one explaining that her best friend still breastfeeds her two kids that are seven and five years old, and a one-year-old.

She asked: “How can I tell her to stop breastfeeding the older kids (seven and five)? They are boys. What do I do?”

Most parents and forum users agreed that she shouldn’t say anything as “it has nothing to do with you or your ‘it doesn’t seem right’ opinion”.

Another user opined that is “absolutely ridiculous” to be breastfeeding a seven-year-old and a five-year-old but they didn’t think that this was their business.

Other forum users revealed that they have even breastfed children that weren’t their own. A woman explained that she was watching her friend’s baby while she attended an appointment and took her own baby and her friend’s to a shopping centre.

When she was having a coffee at a restaurant, the friend’s baby started crying at the same time as hers as they wanted to be fed.

She found “an out-of-way corner with a bench, deployed the privacy blanket, and hooked the babies up”.

“They were chugging away quite happily, and I was happily reading my book and sipping my coffee when two older women passing by saw their four little onesies’ feet poking out on my lap.”

The two women thought that she had twins and asked if they could see them. “Our nosy Nellies recoiled, and ‘Um, oh, um, hmmm…’. That was all they could manage before they tottered off in utter confusion. My friend’s baby was black, mine white,” she explained.

The NHS says that “all mothers and babies are different” but exclusive breastfeeding (breast milk only) “is recommended for around the first six months of your baby’s life”.

Breastfeeding alongside solid foods is best for babies from six months, the health site stated.

“You and your baby can carry on enjoying the benefits of breastfeeding for as long as you like. Breastfeeding into your baby’s second year or beyond, alongside other foods, is ideal,” it added.