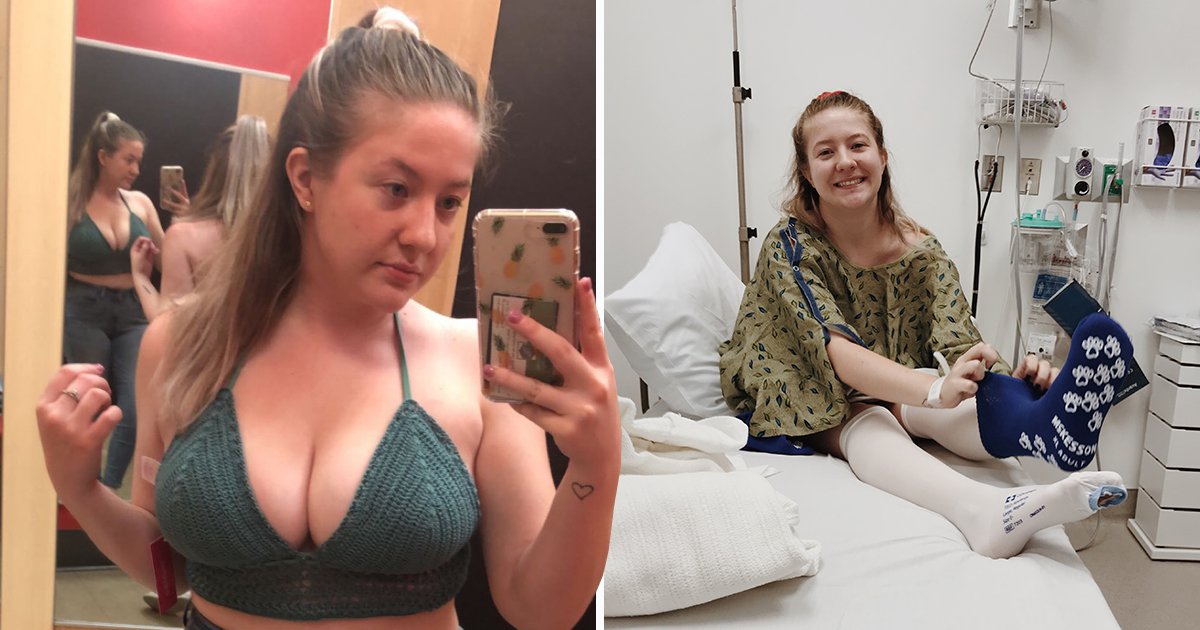 A woman has revealed how she spent thousands on a breast reduction only for them to start growing back three months later.

With size E cup breasts, Bethanie Lyon, 24, from Los Angeles, California, had the surgery in July 2019 after years of struggling with back pain, unwanted attention and clothes not fitting correctly.

Following the surgery, professional singer Bethanie was delighted with her new C cup boobs. However, within three months, she noticed the seams on her stage costumes were splitting. To her shock, her breasts were once again growing.

Nine months after the operation, Bethanie was back to almost the same size she was before.

‘It was as frustrating as it was heartbreaking honestly – I was so happy after surgery with how they looked,’ Bethanie said.

‘After having gone through so much pain, feeling like it was all for nothing was difficult to come to terms with.’

As a teenager, Bethanie’s chest developed quickly, and by 14, it became clear she would have large breasts.

‘I was always a little embarrassed by their size,’ she recalled. ‘People commented constantly. It was all people saw about me, and all anyone associated me with was having a big chest.’

As a singer and dancer, Bethanie’s cup size also caused issues for her work.

Meanwhile, she felt like she was missing out when it came to fashion.

‘They were just always so heavy and in the way, and I honestly felt like I looked stupid with them when I danced,’ she said.

‘I also couldn’t wear lots of clothes that I wanted to because they wouldn’t fit my chest. Most fashion caters to people with flatter chests, so I felt like I was missing out.

‘Because bra sizes are so inconsistent, I never really knew what size bra to buy. Since most stores only carry up to a DDD, I would usually buy a 36 or 38DDD, and sometimes they would kind of fit, but they were usually too small.’

‘I was so nervous because I had never had surgery or been under anaesthesia before, but I was equally as excited,’ she remembered.

‘The doctors were so wonderful, and I love them all. They made me feel very safe and taken care of, which helped a lot with nerves.’

Following the surgery, the recovery was long, and Bethanie had a more intense reaction post-op than most patients.

‘My surgeon told me I must be much more physically sensitive than most people,’ she said. ‘They had to give me extra medication to be able to walk, sit down, and stand up.

‘I would cry every time I had to get up off the couch for the first week because I was in so much pain. It felt like my skin was ripping apart.

‘After about three weeks, I was able to move around as I normally would, bar dancing or exercising.’

By October 2019, Bethanie was back at work on the set of the Wedding Singer.

It was at that moment she noticed the reduction reverting.

‘I was working as a dancer, and the seams of my dress busted open when we tried to zip it right where my chest was,’ she explained.

‘For a couple of weeks before that, I could feel it getting tighter in the chest but not in my stomach, so I just ignored it. As months went by, they just got bigger and bigger until, after roughly nine months, they were pretty much back to the size they were before.’

She continued: ‘I haven’t worn bras since my surgery because of the pain of bra straps and bands, so I don’t know what size they are now, but they look almost identical in size as before my surgery – maybe a cup size smaller.’

Like most, Bethanie was told all of the risks of having the surgery – including that they could grow back – but was reassured it was rare to have that problem.

Although the dancer has never been given a definite reason for the regrowth, she believes it may be down to a hormonal issue.

‘I was aware it was possible, but I never thought it would actually happen,’ she said.

‘Your body is going to do what it wants to do, and sometimes you just can’t help it. I have hypothyroidism and I have to take medication every day to make my body function more regularly.

‘This condition messes with my hormones, so it’s possible that they grew back because of my thyroid.

‘My genetics very well could have played a part in it too because I have family on both my mom and dad’s side that naturally have large chests, so my body may have just thought it was doing what it was supposed to do by growing them back.’

Two years on from her surgery, Bethanie’s feelings have changed about having a large chest.

She said: “I’m not as embarrassed of them anymore as I was when I was a teenager because I’ve learned to accept my body the way it wants to exist.’

Despite this, Bethanie is considering having the operation again in the future.

‘From what I was told, I would have to wait a long time before I could get another one for safety/health reasons,’ she explained.

‘I honestly don’t know if I could go through it all again, though. If I decide to have kids in the future, I think I will get another one when I’m done having a family.’

Send us an email at [email protected]