Bride kicks teen server OUT of her wedding for wearing ‘too much eyeliner’ and ‘inappropriate’ clothing – so is she in the wrong?

A bride has asked if she is ‘in the wrong’ for kicking a 19-year-old server out of her wedding because of her ‘distracting’ appearance.

Taking to Reddit, the bride said the teen was wearing ‘too much eyeliner’, and was upset because she had a ‘flashy’ ring, diamond studs in her ears, a stud in her nose, a low cut top and tight pants.

The disgruntled bride complained to the manager several times and eventually had her removed from the venue altogether. 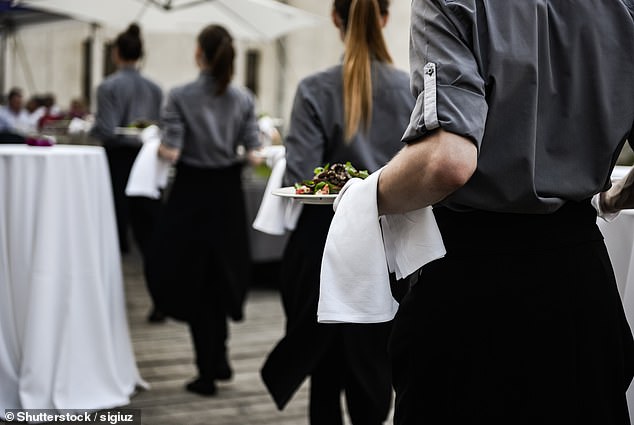 ‘After the wedding pictures we headed to our cocktail hour, and that’s when I saw her,’ the woman wrote.

‘My guest were all told to wear dark colours so my husband and I stood out, I also asked my guests to wear minimal makeup. I had assumed that applied to the staff too.’

She said the 19-year-old female server had ‘clearly too much eyeliner’.

‘She was wearing diamond studs in her ears, a flashy ring, and one of those ugly nose studs. The staff’s uniform was a black long-sleeved shirt but on her, it was too low cut and her pants were far too tight.’

‘When the boss came out I pointed out the server and asked that she be dealt with because she was super distracting. The boss apologised and called the server back into the kitchen,’ the wife explained.

‘Not even an hour later the server was back out serving food for dinner. I called the boss over again and asked if the server could work in the back or go home.

Her boss said they were short-staffed so she would see what could be done… after a couple of hours she appeared again behind the bar.

‘I called the boss out one last time and told her if the server didn’t leave I would be calling the cops. The boss finally relented and told the girl to go home,’ she said.

Was the bride in the wrong?

Was the bride in the wrong?

The woman’s family was split on the matter. Her husband and mother-in-law think she was acting ‘crazy’ and ‘probably got a poor college kid fired over nothing.’.

However her mother and maid of honour said its her wedding and she can do as she wishes.

‘It’s my wedding and I don’t want someone over-shining me and the server should know she’s at work and not dress up so much. I do feel kind of bad because she was pretty young.’

Thousands of people have commented on the thread; the majority feel the bride is in the wrong.

‘She threatened to call the police! Because a person turned up for and did their job. Could you imagine that conversation! In what universe would the police turn up to arrest a person for doing their job while wearing jewellery and *checks notes* having boobs,’ one said.

‘She spent her own wedding freaking out that a young server in a uniform may have outshined her. What a waste of energy,’ another Reddit user said.

‘Getting married isn’t an excuse to abuse waiters,’ one woman said.