A woman, who sometimes has to rely on a wheelchair because of a heart condition, has hit back at strangers who mocked her for faking her illness, after she stood up to take a few photos at Disney World.

Kristen Waldbieser, from Orlando, Florida, suffers from Postural Orthostatic Tachycardia Syndrome (PoTS), which means her heart rate increases abnormally when she sits or stands up.

The author was visiting Disney World last week and took her wheelchair to help with the long distances, which she often finds difficult to walk.

However, when posing for a photo in front of the new Star Wars: Galaxy’s Edge area, she was bombarded with shouts of ‘hoax’ as soon as she stood up and moved away from her wheelchair.

Deeply upset by the comments, despite the strangers insisting they were only joking, Kristen took to Facebook to share the incident, and thousands of social media users were quick to offer their support. 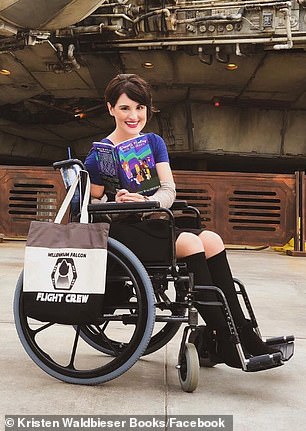 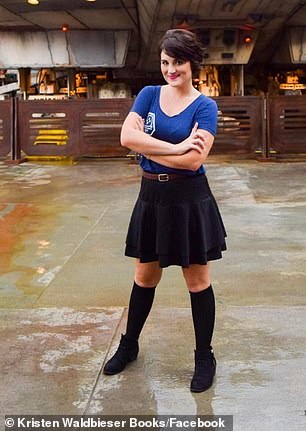 Kristen Waldbieser, from Orlando, Florida, pictured in her wheelchair, left, and standing, right. She has hit back at strangers who mocked her for faking her illness after she stood up to take a few photos at Disney World

Kristen wrote on Friday: ‘So, quick story time. Yesterday I was at Disney, and I was using my wheelchair, which I need to go long distances (like a theme park).

‘Anyway, I stood up to take a photo, and someone said (jokingly), “Oh, the wheelchair is a hoax!” They quickly followed that they were kidding.

‘However, the words stung with me. No, I don’t need my wheelchair every day. But my wheelchair helps me get places that I otherwise probably couldn’t go.’ 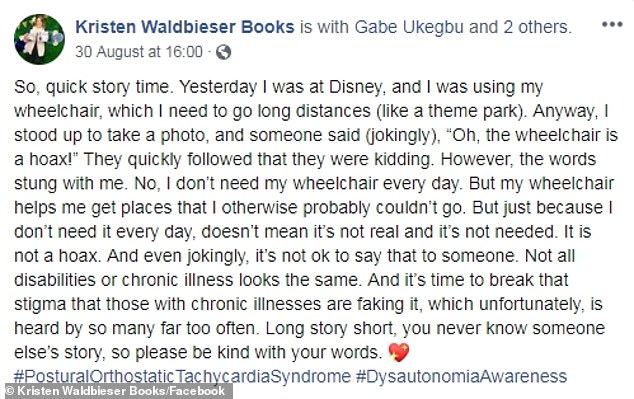 Kristen took to Facebook to share the incident (pictured), and thousands of social media users were quick to offer their support

She continued: ‘But just because I don’t need it every day, doesn’t mean it’s not real and it’s not needed. It is not a hoax.

What is postural orthostatic tachycardia syndrome?

Postural orthostatic tachycardia syndrome (PoTS) is an abnormal increase in heart rate that occurs after sitting up or standing.

It typically causes dizziness, fainting and other symptoms.

PoTS affects many different people, but is most common in girls and women aged 15 to 50.

Some people have mild symptoms, while others find the condition affects their quality of life.

PoTS often improves gradually over time, and there are a number of self-care measures and medications that can help.

‘And even jokingly, it’s not OK to say that to someone. Not all disabilities or chronic illness looks the same. And it’s time to break that stigma that those with chronic illnesses are faking it, which unfortunately, is heard by so many far too often.

The Princess Audrey Saves the Prince author finished her post with: ‘Long story short, you never know someone else’s story, so please be kind with your words.’

Many praised Kristen and thanked her for sharing her story, with one writing: ‘This is such an important message.

‘In general, if we could focus our efforts on judging less and being more kind, things would be so much more pleasant.’

Another said: ‘My best friend has MS and sometimes uses her wheelchair. It is so very important that people mind their own business. Thank you so much for sharing!’

A third added: ‘Beautiful, sorry for the unkindness you’ve encountered but thrilled to see such bravery. Thanks for sharing! I know this is helping others in many ways.’

‘That is so true! It’s difficult to live with an “invisible” disease, but forgive them “for they know not what they do’, another said. 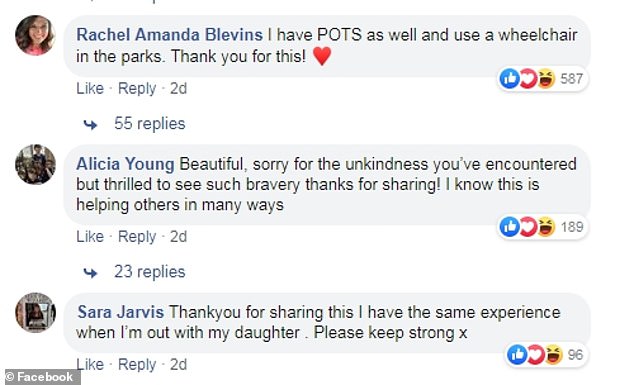