Loose Women viewers brand Dame Jenni Murray, 70, ‘transphobic’ after she reiterated her view that transgender women are not ‘real’ females due to ‘biology’

Dame Jenni Murray has been accused of being ‘transphobic’ after reiterating her controversial views about transgender women on Loose Women today.

The 70-year-old broadcaster, who made the comment while referencing a 2017 Sunday Times article she wrote which sparked outraged at the time, told how she ‘believed in biology’ – before claiming that transgender women are not the same as biological women.

‘Oh the trans question,’ she said. ‘I did write an article saying that I did believe in biology and that there are two sexes and that you’re either male or female.

‘So if you are a trans woman, you deserve to be respected and not to be bullied or used badly in any way, but at least acknowledge that it’s different from someone that was born a woman. So yes, that cause a bit of a kerfuffle.’

The Women’s Hour host, who also caused further offence after saying that IVF and egg freezing was great for ‘women and men who really tried,’ faced backlash from viewers. 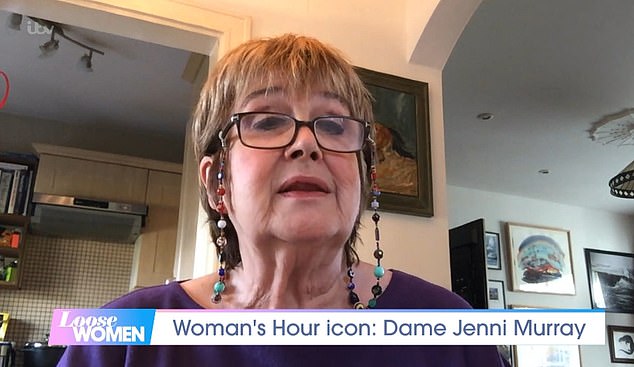 Dame Jenni Murray, 70, landed herself in hot water when she reiterated her stance on transgender women on Loose Women

Jenni Murray made the comments while speaking to Loose Women panellist Carol McGiffin, who pointed out she had been at the centre of a few controversies after expressing some arguably controversial opinions on Women’s Hour.

And viewers were quick to take to Twitter to call the broadcaster out on her comments – with many branding her transphobic.

‘Jenni Murray rehashing her old transphobia,’ commented one, while a second penned: ‘When Dame Jenni just ironically said“talked out of a job” after saying a transphobic comment.’

A third added: ‘More transphobia on #loosewomen, marvellous,’ while another wrote: ‘Nice to see that blatant transphobia from the cackling h***.’ 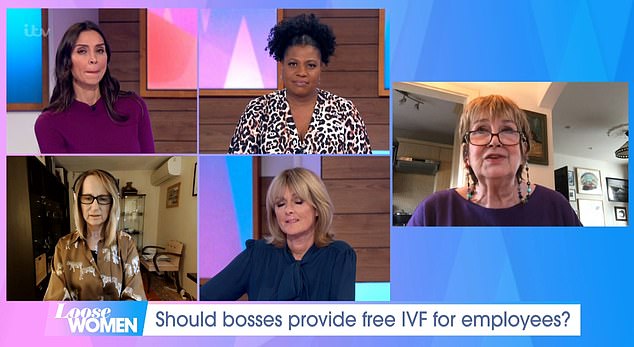 The Women’s Hour host also said IVF should not be a ‘perk of the job’ and that it was really wonderful ‘for women who had really tried.’ Pictured, with the Loose Women panellists

A further commented: ‘Feel like I’m watching a programme from the Victorian ages with talk of transphobia and gravy snobbery.’

However, other viewers took to the comments section to instead argue they didn’t think the Women’s Hour host’s remarks were transphobic.

One wrote: ‘what she said wasn’t transphobic. It’s fine to be transgender but you can’t claim to be a actual woman or man. You can identify that way but biologically you aren’t. And that’s ok.’

In 2017, Jenni wrote about India Willoughby, who has appeared on Loose Women.

‘India held firmly to her belief that she was a “real woman,” ignoring the fact that she had spent all of her life before her transition enjoying the privileged position in our society generally accorded to a man.

‘There wasn’t a hint of understanding that she was simply playing into the stereotype – a man’s idea of what a woman should be.’

Viewers were not pleased by Jenni’s comment, but some said she was not being transphobic on the show

Jenni addressed her 2017 comments in the Sunday Times magazine in early October, when she wrote for MailOnline:

‘I made clear that I was not transphobic or anti-trans. Indeed, I emphasised my belief that everyone — whether transgender or those of us who hold to the sex assigned to us at birth — should be treated with respect and protected from the bullying and violence that so many like me have suffered.

‘I merely asked the trans activists to acknowledge the difference between sex and gender, a trans woman and a woman, respect our right to safe single-sex spaces and abandon the nonsensical idea that we should be known as ‘cis women,’ she added.

Later on the show, Dame Murray also took part in a panel discussion on whether bosses should offer to pay for their employee’s IVF.

‘Men and women have children, and it’s actually quite a pleasurable to do it if you do it the natural way,’ she said.

‘I think IVF is great for women who really have tried and have found difficulty in getting pregnant.

‘It’s a wonderful technology if you can’t manage it the natural way.  but to make this a kind of perk at work, is outrageous. 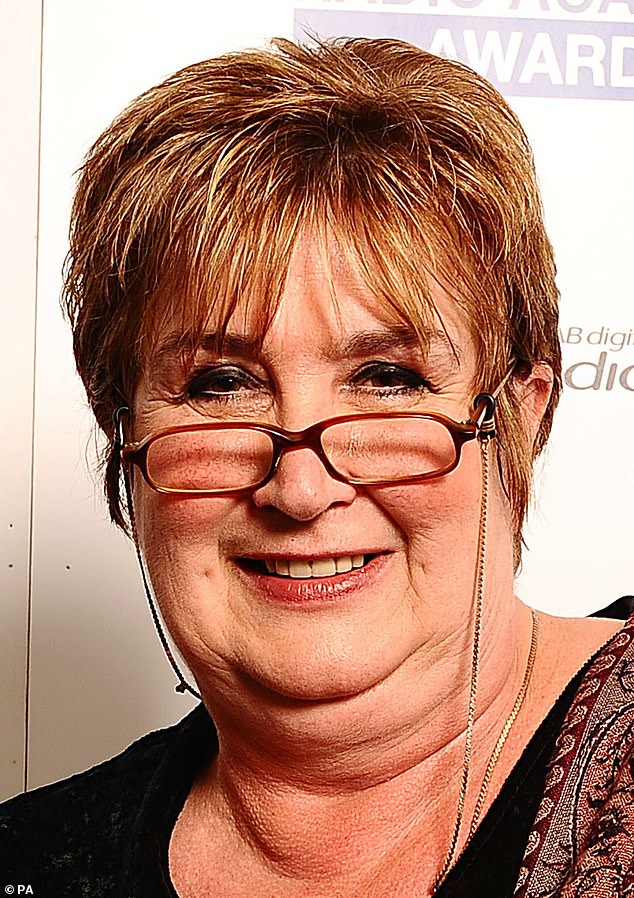 Jenni Murray, pictured, was criticised in 2017 when she said transgender  women were oblivious to the struggle women faced in society, and only played into ‘stereotypes’ of what men thought women should be