Fourteen years after he last donned a mankini and visited our shores to promote his first movie, Sacha Baron Cohen's Borat returned to Bondi Beach on Thursday. Or at least a six-metre-tall statue of him did. 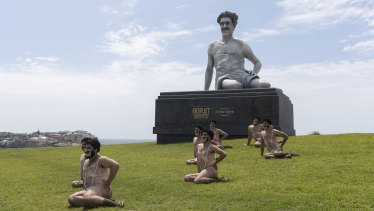 Impersonators pose with a six-metre statue of Borat at Bondi’s Marks Park.Credit:Getty Images

As scores of amused locals, befuddled tourists, and press in Borat facemasks watched on, a helicopter dramatically delivered the huge statue to Bondi's Marks Park, site of the annual Sculpture by the Sea festival, which would've started this week if not for the ongoing pandemic.

"It give me great pleasure to present you with this giant Borat erection at Bondi Beach," said Baron Cohen in character as Borat via a live satellite feed from "Kazakhstan". 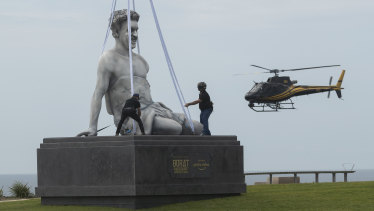 A helicopter delivers the statue to Marks Park.Credit:Getty Images

"This statue was quarantine in a hotel in Melbourne for 14 days. It is free of COVID but probably have syphilis after four of your security guards make sexy-time with it," he added.

The stunt, organised by streamer Amazon Prime Video, was to promote Borat Subsequent Moviefilm, Baron Cohen's unlikely new outing as the fictional Kazakh journalist who he'd initially retired in 2007, a year after winning a Golden Globe for the role in his defining first film Borat: Cultural Learnings of America for Make Benefit Glorious Nation of Kazakhstan. The new film premieres on Amazon Prime Video on Friday.

True to form, the mockumentary has already sparked controversy after pre-release reviews from the US divulged a scene in which former New York mayor and Donald Trump's personal lawyer Rudy Giuliani is reportedly shown putting his hands down his pants after flirting with an actress, Maria Bakalova, playing Borat's daughter in the film.

On social media, critics and Hollywood figures decried the scene. New York Times columnist Maureen Dowd described it as "beyond cringe". Actor Josh Gad suggested the scene could end Giuliani's public career. "It's worse than you think and more uncomfortable than anything I've seen in a recent film, documentary or otherwise," he wrote. 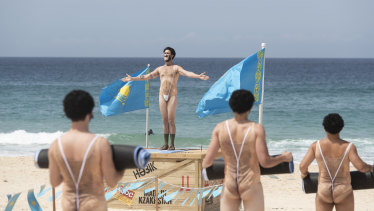 A group of impersonators take part in “Borat yoga” to promote the new film.Credit:Getty Images

On Twitter, Giuliani hit back at salacious readings of the scene, calling it a "complete fabrication". He said he was just "tucking in my shirt after taking off the recording equipment". "At no time before, during, or after the interview was I ever inappropriate. If Sacha Baron Cohen implies otherwise, he is a stone-cold liar," Giuliani wrote.

At Thursday's media conference in Bondi, Baron Cohen, as Borat, didn't take any questions from the gathered press. But he did slyly nod to the emerging controversy.

"I have new movie film coming out tomorrow," he said in Borat's exagerrated drawl. "I think you will enjoy it more than Rudolph Giuliani will. Or as you guys call him, Cockadile Dundee, yes?"

The statue will remain in Marks Park until Friday 11am.