A viewer allegedly paid to see her forced outside in sub-zero temperatures wearing nothing but underwear.

YouTube is currently trying to track down and delete videos purporting to show a Russian vlogger livestreaming his girlfriend’s death.

Stas Reeflay was arrested after he allegedly forced his 28-year-old pregnant partner Valentina Grigoryeva outside on a balcony in sub-zero temperatures wearing just her underwear, The Mirror reported.

The disturbing video, which was seen by TooFab, appears to show Reeflay dragging her lifeless body back into his apartment — all while the camera is still running. 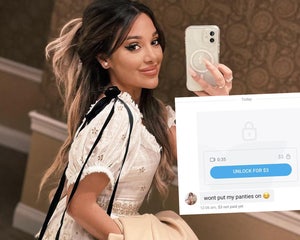 According to local media reports, 30-year-old Reeflay — whose real name is Stanislav Reshetnikov — was paid $1,000 by one of his subscribers to inflict the torment.

The video was not originally streamed on YouTube; however copies of it quickly began spreading on the site Friday morning — quicker than Google could take them down.

“We’re shocked to learn of this tragic incident,” a spokesperson told TooFab in a statement. “This kind of graphic content is not acceptable on YouTube.”

“Although the original live stream did not take place on YouTube, we quickly removed reuploads and terminated the associated account.”

One copy of the sick video appears to show the pink-haired Grigoryeva sitting in front of the computer with Reeflay and another woman, an open bottle of liquor in the foreground; Grigoryeva, appearing inebriated, grabs a knife and threatens him before falling over off screen, while the other two appear to try to restrain her.

Reeflay is later seen dragging the unresponsive Grigoryeva — who is wearing just a bra and panties — back into the room from the hallway by her arm, and trying to wake her, before leaving her lying on the floor to continue talking to the camera, even swigging from an open bottle.

He goes back to the body, sounding increasingly frantic, calling her name and even attempts CPR. “Damn… I’m not feel her heartbeat,” he announces in Russian. “Guys… No pulse… She’s pale. She is not breathing.”

He’s then seen calling an ambulance before cradling her lolling head in his arms and sobbing.

At one stage Reeflay carries the body to a couch and covers her in a blanket, before sitting down and continuing to address his livestream followers.

The surreal scene is further compounded when two medics arrive and appear to make zero effort to revive her, briefly checking on her before interviewing Reeflay.

According to the reports, Grigoryeva died of suspected hypothermia, but Reeflay would only face a maximum of two years in prison if this was proved to be the case.

It wasn’t the first time Reeflay allegedly tortured his partner for clicks either; in one of his previous livestreams, he doused her with pepper spray, The Mirror reported.

The YouTube spokesperson told TooFab that per policy, even if such graphic or violent videos are faked, they will be removed if it is not immediately clear to the viewer they aren’t real.