Northern Europeans love Majorca, the breezy Balearic island about 125 miles off the coast of mainland Spain. An easy weekend getaway for sun-seeking Brits, Germans and Scandinavians, the Mediterranean island and its capital, Palma, are sometimes derided as a cheap package-tour destination for hard-partying holidaymakers. And in July and August — the height of the summer season — this is certainly true. But the rest of the year, you’re as likely to hear accented English as Mallorquí, the local dialect of Catalan. So wander the warren of narrow stone alleyways in Palma’s medieval center, drive inland to explore ancient olive groves and rural mountain villages, and along the way, discover another side of this surprising, sun-baked island.

The view from atop the 14th-century Castell de Bellver, about a mile west of the city center, encompasses all of Palma: from the palm-lined harbor to the famed cathedral’s distant spires. Follow this sightline on foot, starting at the harbor, an aquatic parking lot of ostentation where yachts are docked beside megayachts docked beside superyachts. Continue along the sunny harborside promenade for about a mile toward the Catedral de Mallorca, a Gothic cathedral known simply as La Seu. The finest vantage to admire this cliff-top landmark is actually from below, in the Parc de la Mar, a man-made park with a pretty fountain and a large pool reflecting the golden sandstone facade.

The whole city strolls the tree-lined Passeig des Born in the hours before dinner, so branch off this wide allée to instead explore the narrow side streets dotted with small shops and art galleries. The Palma branch of Berlin’s Kewenig gallery showcases emerging artists inside a 13th-century oratory, while the Gerhardt Braun Gallery hosts exciting contemporary installations in a 17th-century Mannerist mansion. Colorful Majorcan ceramics — hand-painted platters, sea-blue bowls — can be found at Terra Cuita, the store of an artisan producer in nearby Pòrtol. And don’t miss Galería Pelaires, a gallery with an international bent whose program last year included a dreamy Prudencio Irazábal exhibition. 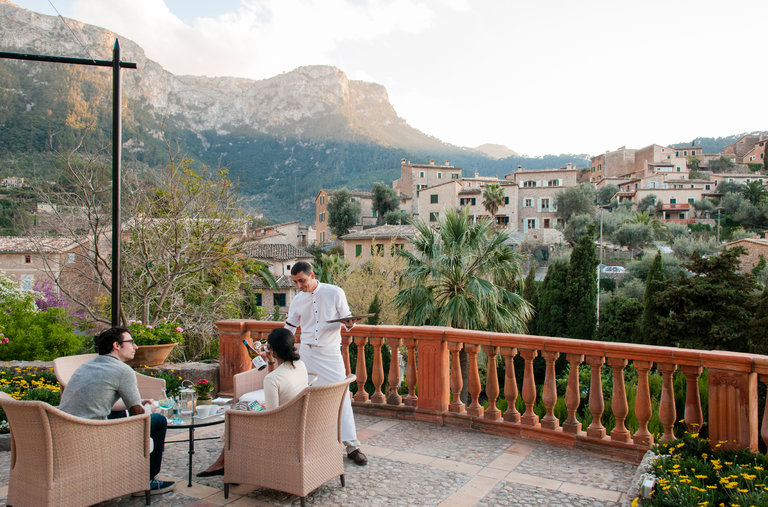 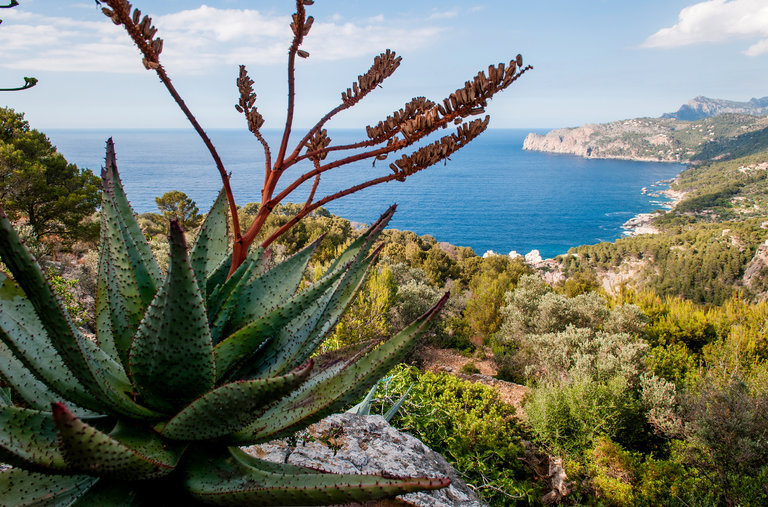 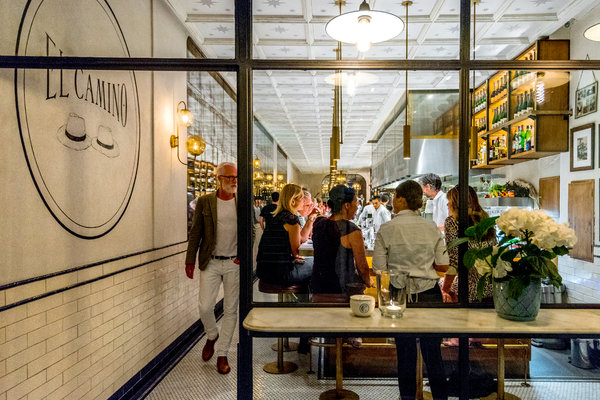 Given the British proclivity for Palma, it’s little surprise that one of the brightest additions to the local dining scene comes courtesy of a London restaurateur. El Camino is a stylish tapas bar that opened last year in a gorgeous space: a narrow room with mosaic-tile floors, coffered ceilings and one long marble counter lined with leather stools. It’s also often full, which makes the standing-only bar tables in the rear, where drinks and snacks are served, an attractive alternative. Claim a spot among the sociable crowd of expats in their finest frippery, and order a few bites: blistered padrón peppers, garlicky fried squid, crisp jamón croquettes and, if you ask nicely, a palm-size Spanish omelet filled with spicy chorizo from the regular menu. To drink, try a glass of Majorcan tinto from Bodega Son Vell, a small winery producing blends with rare indigenous grapes, like callet and fogoneu mallorquí. Dinner for two, about €70, or about $78.

End the evening as the Spanish do, with a gin and tonic, the de facto national drink. At Clandestino Cocktail Club, a cozy spot with candlelit tables, a jazzy soundtrack and a solid selection of top-notch spirits behind the bar, you’ll get a proper balloon glass with your gin of choice; jammy Brockmans is always a great pick. Or join local craft beer drinkers for a pint at Lórien, a friendly, no-frills pub nearby where taps recently featured a hazy I.P.A. from Cerveses La Pirata in Catalonia, and a brown ale from Majorca’s Sa Cerviseria brewery.

How do you like your breakfast: trendy or classic? For the former, take a seat at a table outside the city’s first specialty coffee shop, La Molienda, on a quiet corner in the Sant Jaume neighborhood. The order here is a velvety cappuccino made with beans from Barcelona-based Right Side Coffee Roasters, a glass of fresh-squeezed orange juice, and the delicious pa amb oli de queso — toast drizzled with olive oil and served with Menorcan cheese, sliced apples and local olives (€7.50). Service is friendly but scrambled, so plan to take it slow. Or pursue the historic route, at the original location of Ca’n Joan de s’Aigo, an old-school bakery dating to the 18th century. Amid chandeliers and faded grandeur, opt for a sugar-dusted ensaïmada (€1.40), a traditional snail-shaped Majorcan pastry, and a creamy almond horchata.

Majorca is much more than its capital, so hit the road for a more complete picture of the island. Head north out of Palma onto winding two-lane roads that curl into the Serra de Tramuntana, a rugged mountain range (and Unesco World Heritage Site) spanning the northwestern coast. Just outside the pretty village of Valldemossa, stop to explore Son Moragues, a finca, or country estate, founded in the 14th century that was once home to Archduke Ludwig Salvator of Austria. Today the sprawling property is focused on land conservation, and produces fine organic olive oil from native varieties. Arrange a private tasting and tour of the terraced groves to stroll alongside roaming sheep and marvel at the magnificent mountain views (by reservation only; from €75 per person).

Continue north along the scenic coastal road, a snaking drive through the mountains with distractingly good views. Make a pit-stop at Son Marroig, another of the archduke’s former homes, to snap photos of the dramatic coastline. Then roll through the ochre-hued hamlet of Deià en route to the town of Sóller. Nestled in an inland valley, sleepy Sóller springs to life on Saturdays when the streets fill with market stalls selling everything from straw totes to sobrassada. Buy a bag of warm bunyols, small sugarcoated doughnuts, and stroll around Plaza de la Constitución, the sunny main square, where every so often, whistles blare and a vintage wood-paneled tram trundles through, rattling toward the port two-and-a-half miles away.

Circle back toward Palma and stop on the outskirts to tour the Fundació Miró Mallorca, a museum on a scenic hillside property where Joan Miró lived and worked during his final decades of life. Start the visit inside the studio designed by the architect Josep Lluís Sert, and then climb to the 18th-century villa where Miró’s charcoal sketches graffiti the walls. Finish in the exhibition hall, where galleries and an outdoor garden display sketches, sculptures and large-scale paintings. Admission, €7.50.

A starter kit for escaping into the world.

Warmth radiates from Toque de Queda, a casual restaurant, bar and deli squirreled away on an alley in the old town where diners lounge in window niches and sip cava around long communal tables. A former bakery with a centuries-old oven, this rambling locale is today run by a young Italian couple who serve simple tapas based on locally sourced products. Start with an order of pan de cristal con tomate (€5), crisp bread slathered with fresh tomato, and one of the charcuterie boards dedicated to various Mediterranean regions. For little-known local specialties, try the Balearic board, with spicy sobrassada, chunky camaiot, and intense figatella sausages, alongside various cheeses from the neighboring island of Minorca (half-portion, €14).

If there exists such a thing as a secret Majorcan beach, don’t expect locals to give it up. But finding an astoundingly beautiful white-sand crescent nestled between dramatic cliffs and turquoise seas is easy, and beating the crowds is simply a matter of timing. At Mondragó Natural Park, about an hour from Palma on the southeast coast, arrive early to explore the protected coves and sheltered dunes surrounded by natural pine groves. Or head farther down the coast to Caló des Moro and hike down a rugged dirt trail to reach an enchanting cove with crystalline water.

When the shores swell with sun-seekers, double back to a shady alley in central Palma for a leisurely midday meal at La Rosa Vermutería. Since opening in 2015, this lively restaurant has revived the Spanish tradition of a midday vermouth, which happens to be the perfect aperitif to sip while (inevitably) waiting for a table. Overwhelmed by the two dozen vermouth options? Try the house blend, 5 Pétalos, with its natural pairing, a bowl of marinated olives. Once tucked around a table in the long, narrow dining area, peruse the menu of tapas and conservas (canned seafood). Recent highlights included the croqueton de txuleton (a crisp meat-filled croquette), briny preserved clams and paprika-dusted Galician-style octopus. Lunch for two, about €50.

Opened in January, the 99-room Protur Naisa Palma Hotel is on a quiet street just outside the old town with an inviting lobby lounge and restaurant, an indoor pool and spa, and a rooftop pool with sun beds and lounge chairs (Carrer de Simó Ballester, 6; protur-hotels.com; from about €150).

On a main boulevard in central Palma, the Nakar Hotel opened in 2016 with interiors that incorporate local materials, like typical Majorcan stone. In addition to 57 neutral-toned rooms, the property also has a restaurant, a spa, an indoor heated pool and a rooftop terrace with an infinity pool and views across the old town (Avenida de Jaume III, 21; nakarhotel.com; from €215).

Recent laws have banned most short-term rentals in central Palma, but outside the city, licensed holiday properties are plentiful. Around Sóller, traditional cottages can be found on Airbnb for under $100 a night.