June is Pride month in New York City, a time when it feels like nearly everyone in the five boroughs is a member of the family or a trusted ally. That sense of community will be surpassed this year as New York celebrates the 50th anniversary of the Stonewall Uprising, the night in 1969 when a group of gay, lesbian and transgender people stood up to harassment, and the gay liberation movement was born. Big Apple’s Pride will also feel more international as it becomes the first time the United States is home to WorldPride, whose previous locations include Rome, Jerusalem, London, Toronto and Madrid. There are a multitude of events happening this month, but ultimately pride is personal. How you choose to celebrate is up to you. The events below will not necessarily keep you out until dawn, but they will take a bite out of what New York has to offer this month.

“Stonewall 50” is the overarching theme for several exhibitions at the New-York Historical Society, among them “By the Force of Our Presence: Highlights from the Lesbian Herstory Archives,” a collection of photographs, books, posters, clothes and other mementos that seeks to prevent the erasure from history of the many contributions made by lesbians and queer women. The full collection of the Lesbian Herstory Archives is housed in Park Slope and can be visited in person or virtually. Another exhibition, “Say It Loud, Out and Proud: Fifty Years of Pride,” is a march through significant moments in L.G.B.T. history, with photographs of past marches from the 1960s to now. Admission: $13 to $21.

The best way to appreciate the city is by walking it, so take some time for a stroll before the next pit stop. You can get an elevated view from the High Line, an abandoned freight line turned into a public space, and walk south toward the Chelsea neighborhood and check out its many galleries, many of which can be found between 19th and 27th streets between 10th and 11th Avenues. Not far away, Team New York Aquatics is hosting this year’s International Gay and Lesbian Aquatics Championships, and as part of that, the New York group is presenting a Q. and A. on Friday, June 28, at 5 p.m. with three out-and-proud Olympians: the Americans Bruce Hayes and Betsy Mitchell, who won gold medals in 1984, and the Australian Daniel Kowalski, who got the gold in 2000. The event will be moderated by Jeff Commings, the author of “Odd Man Out: True Stories of a Gay Black Swimmer,” his autobiography about swimming, his Olympic trials and his struggles with homophobia. Tickets: $10 (and limited to 400 attendees).

The bar and restaurant Cowgirl, opened in 1989 by Sherry Delamarter, a native of Texas, is all about comfort and kitsch. Every nook and cranny seems to be adorned with gay flags, checkered tablecloths, tequila bottles and Western memorabilia. There are salad options if you’re trying to be good, but if today is your cheat day, opt for the Frito pie: an open bag of Fritos gloriously topped with chili and all the fixings — jalapeños, Cheddar cheese, sour cream and onions. The veggie version is $8.50, beef is $9.95. Another favorite: artichoke fritters with spinach dip ($10.95). Indulge away, there is exercise ahead.

The art collective known as Papi Juice, which caters to queer and trans people of color, was founded in 2013. The Papi Juice World Pride dance party on June 28 in Brooklyn starts at 7 p.m. with a rooftop sunset reception and promises to go until 5 a.m. There will be 15 D.J.s in three rooms at the massive venue Elsewhere in Bushwick. Ticket sales will benefit Landscape, a program for visual artists. Tickets: $30 to $50. 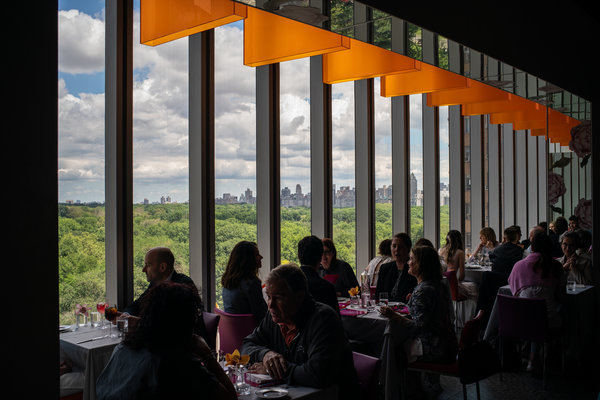 You could make a weekend visit out of Central Park by itself. For this trip, start June 29 off with the Front Runners New York LGBT Pride Run. This five-mile run, organized by New York Road Runners and Front Runners New York, an athletic group for L.G.B.T. runners and their allies, has been an annual event since the inaugural outing in 1982 with 440 runners. This year, even more runners can participate in a bid to establish a new Guinness World Record for a charity run. The minimum to beat is 6,000 finishers. This year’s beneficiary is The Center, a resource hub for the L.G.B.T. community, in the West Village. Entries are $15 to $37. The race begins near East 67th Street and heads across the park first north, then west, then south to the finish line near West 71st Street.

After a post-run cool down and clean up, enjoy an aerial view of Central Park from Robert, a swanky American restaurant and lounge that is on the ninth floor of the Museum of Arts and Design building at Columbus Circle. There are bold colors, furnishings that recall Don Draper’s apartment in “Mad Men” and many culinary options. Try the pairing of a tomato bisque and grilled cheese ($18) or the caprese sandwich ($18).

The Criminal Queerness Festival, which runs through July 6, presents L.G.B.T.Q. theater from around the world. Among the performances is “Jhaanjar Di Paanwaan Chhankaar,” written by Fatima Maan and directed by Nicky Maggio. The play is about a blind man, his controlling mother and his new neighbor in Pakistan. It is adapted from “Butterflies Are Free,” a play by Leonard Gershe set in Manhattan, which earned Blythe Danner a Tony Award for Best Featured Actress in 1970. Tickets: $20.

The Australian painter Ross Watson counts among his fans two members of the honorary British knighthood: Sirs Elton John and Ian MacKellen. “Hominus Uniformis” is Mr. Watson’s first solo show in New York. On display are several of his works, which look at men — in various states of dress — juxtaposed against some unexpected backdrops. One of the PG-13 paintings shows a golfer, wearing bright red swim trunks and a red cap, planting a flag, but on a beach, instead of a fairway.

A starter kit for escaping into the world.

The cocktail bar Porchlight is the creation of Mark Maynard-Parisi and Danny Meyer, and it has a passion for hospitality. If you become a frequent visitor, the bartender will try to recall “your usual.” There is an extensive cocktail list, as well as beers, wine and whiskey. The Gun Metal Blue, $18, has Lunazul Tequila, Blue Curaçao, Peach brandy, lime and cinnamon, and a great slogan: “See a blue drink, drink a blue drink.” The best snacks are the warm bourbon bar nuts ($8) and the sugar and spice popcorn ($5). Porchlight bills itself as a nontipping bar where everything is included in the menu prices.

“Camp: Notes on Fashion,” through Sept. 8, displays garments from the 17th century through today in an examination of the concept of camp, which can be humorous and theatrical. Picture the concert outfits of Cher or Elton John and you will be in the right frame of mind for these wearable works of art. One of the standouts is Jeremy Scott’s kimono cape for Moschino that looks like the compartments of a TV dinner — vegetable medley on one side; mashed potatoes on the other.

After a long day of culture, wind down with a late dinner and cocktails at Bsquared, known for its artisanal pizzas and shareable small plates. Start with a Clemenza ($13), a bourbon drink with smoked maple syrup, and the roasted cauliflower ($14), with a medley of capers, pine nuts and raisins. For the main course, pick whichever pizza name tickles your fancy: Oscar the Grouch ($17), The Becky ($17), Meat Packing ($19) or the Italian Stallion ($20). End with the budino ($8), an Italian chocolate pudding with sea salt, olive oil and whipped cream.

Pride is political and not everyone has a seat at the table. The Queer Liberation March on June 30 is a reminder that there are still many battles to be fought at home, across the country and around the world — issues that the Reclaim Pride Coalition, the organizers of this morning march, feel are lost in the Pride March at noon. The coalition’s mission statement includes recognizing the legacy of the Stonewall Rebellion by highlighting the most marginalized members of the community. It kicks off from the Stonewall Inn (53 Christopher Street) and will head up Sixth Avenue to Central Park for a rally on the Great Lawn.

13) Noon. The promise of tomorrow

Just before the official noon kickoff for the New York City Pride March on June 30, there is a moment of silence at 11:58 a.m. for participants to pause and remember those who lost their lives to AIDS and hate crimes. It is an incredibly powerful moment of reflection, before the loud, colorful parade begins. This year’s marshalls include the Gay Liberation Front, an activist group formed just after the Stonewall Uprising; members of the cast of “Pose”; and Monica Helms, a transgender activist and a veteran of the United States Navy. The march begins at 26th Street and Fifth Avenue and heads south and west before making its way back north to 23rd Street and Seventh Avenue. Happy Pride!

The Sofitel New York, 45 West 44th Street, is offering a one-of-a-kind room through Sept. 15. A suite at the hotel has been turned into a celebration of Cher and is adorned with an autographed cast poster of “The Cher Show” on Broadway, original costumes from the production and portraits of the singer by Al Hirschfeld. $499 a night. It does not include the Cher-themed cocktail, Turn Back Thyme.

Hell’s Kitchen has a robust bar scene, near all the major Broadway theaters and the heart of the subway system. Airbnb has many options, priced between $169 and $350, in the neighborhood.

The Ace Hotel, 20 West 29th Street, is a gay-owned franchise of properties that was founded by Alex Calderwood, Wade Weigel and Doug Herrick in Seattle in 1999. It is about a 10-minute walk from the end of the Pride March. Room rates are around $233 and up.

George Gustines is a senior editor. He began writing about the comic book industry in 2002. @georgegustines • Facebook