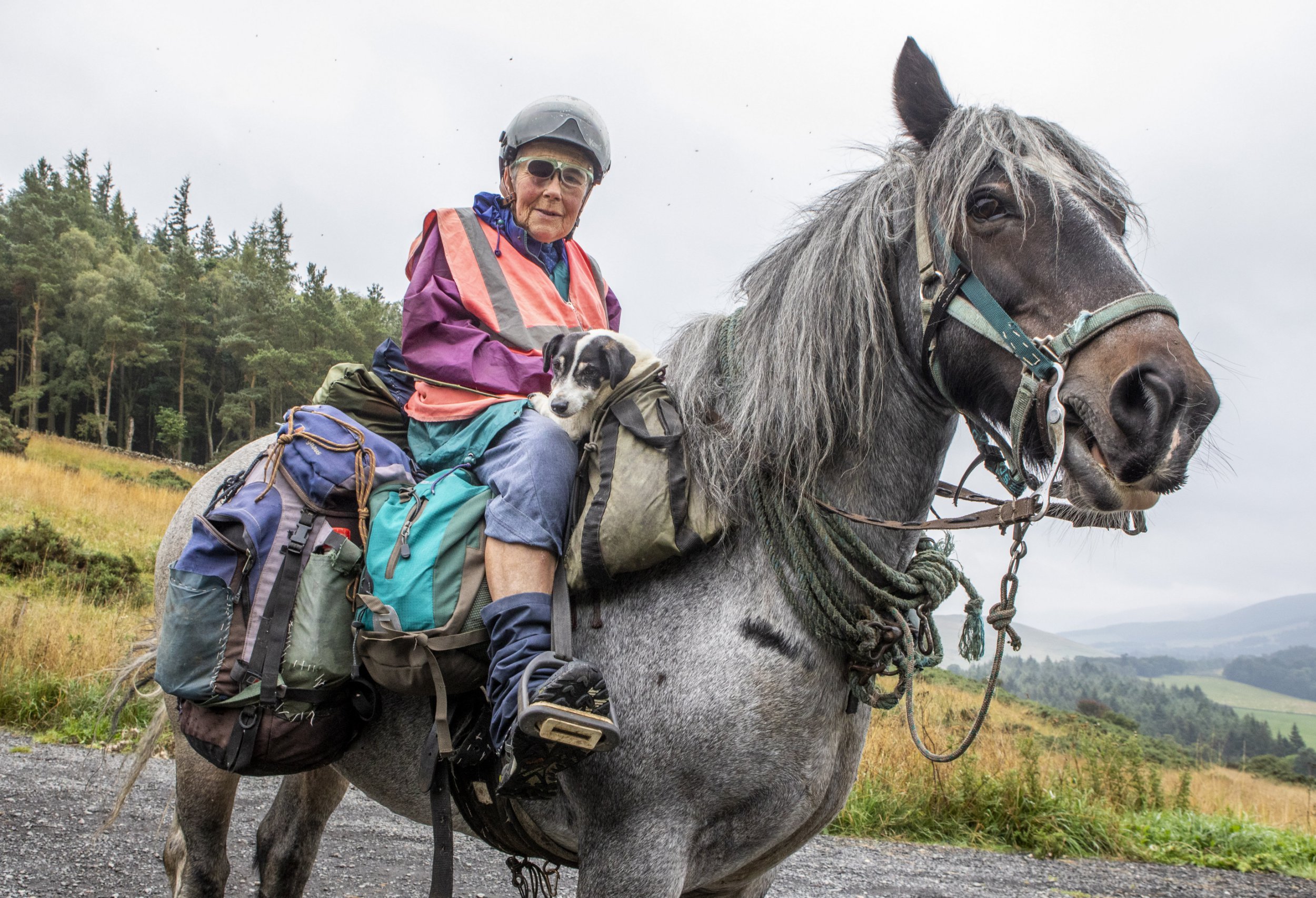 Every year, Jane Dotchin packs her saddlebags and sets off on an epic journey from her home near Hexham, Northumberland, up to Inverness, Scotland.

This time, she began her journey on August 31, with her disabled Jack Russell, Dinky, for company as she covers between 15 and 20 miles a day.

The trip sees Jane carrying everything she needs on her back, including her tent, food, and a few key belongings.

She does all this despite wearing an eyepatch, and plans to keep up the tradition for as long as she can.

Jane’s love of long-distance trekking began around 40 years ago, when she trotted around the West Country.

Jane said: ‘My mother would look after my other ponies but she wasn’t that keen on looking after my Halfinger stallion, so I rode him down to Somerset to see a friend, which is about 300 miles.

After that initial journey, she caught the taste for the open road, and travelled to visit friends near Fort Augustus, near Loch Ness, Highlands, every autumn since.

Her epic journey usually takes around seven weeks, depending on weather, and Jane uses it as a chance to pop in and say hi to people she has met over the years.

She sustains herself on porridge, oatcakes, and cheese, and doesn’t need much electricity as she has an old mobile phone with a battery that lasts six weeks.

‘I refuse to go slogging on through pouring wet rain,’ Jane said.

‘There are a few different routes I can take depending on the weather.

‘I don’t want to go over hilltops in foul weather, but I work it out on the way.

‘I don’t bother with maps, I just keep to the routes I know.’

Dinky, who has deformed front legs, travels in a saddle bag and cuddles up with Jane at night.

The group’s lifestyle is fairly low maintenance, with Jane digging a hole for her bathroom and collecting water from a stream for days when she can’t get milk for her porridge.

Jane is often dismayed by the amount of littering she sees while trekking.

‘It’s appalling, in particular single used barbecues which are left lying all over the place,’ she said.

‘Cumbernauld is the fly tipping capital of Britain.

‘There are some lovely people there who let me camp, but some of it is so disgusting and shameful.’

Jane said: ‘Drivers just didn’t seem to know how wide they were, I was forever just about getting swept off the roads by them.’

But despite challenges, Jane has no plans to stop her yearly strolls.

During the foot and mouth crisis in 2001, she went by bicycle instead – so nothing can hold her back.

‘There is always something interesting happening and there is never a dull moment,’ said Jane.