The travel world has been on a roller coaster in 2020. Even as vaccination campaigns started in the United States and Europe, countries slammed shut their borders to visitors from the United Kingdom, because of a new, even-more-communicable strain of the coronavirus. And while the number of people flying in the United States is again on the rise — topping 1 million a day on the weekend before Christmas — a patchwork of quarantine and testing regulations remains in place in many parts of the country.

Worldwide, Covid-19 has killed more than 1.5 million people, sickened millions more and short-circuited economies. Of all the industries reeling from its destructive impact, the travel industry was upended like no other.

Travel has been changed by past calamities. Safety measures instituted after the 9/11 attacks are now just part of the travel experience. It’s unclear just which changes to the travel landscape will be in place a year from now — or 10 years on — but some answers are starting to come into focus.

On the brink of the new year, we looked at nine of the most pressing queries facing the travel industry and individual travelers — here are the answers. 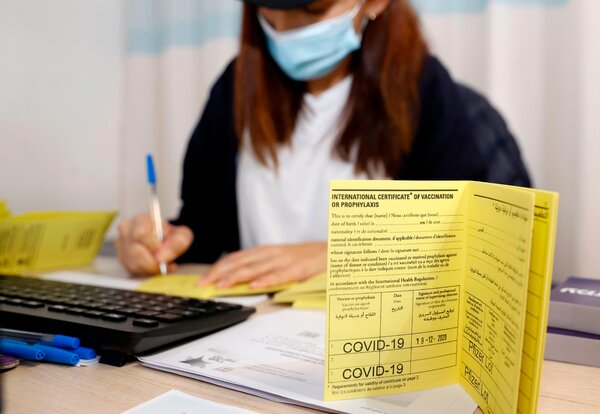 Will I need to prove I’ve been vaccinated to travel?

In November, Qantas Airlines announced that once a coronavirus vaccine was available, passengers hoping to fly on the airline would need to prove that they had taken it. Alan Joyce, the airline’s chief executive, described the need for proof of vaccination as “a necessity.”

“I think that’s going to be a common thing talking to my colleagues in other airlines around the globe,” he said.

Indeed, many airlines are currently testing technology to streamline the health documentation process, including mobile health apps like CommonPass, ICC AOKpass and VeriFLY to ensure travelers can present their health data in a secure, verifiable way.

It’s not known yet whether some kind of universal health form or certificate will be required to travel because that would require participation from various countries and organizations, but that’s happened before. The International Certificate of Vaccination or Prophylaxis, known to many as the carte jaune or yellow card, was originally created in the mid 1930s by the World Health Organization. Versions were used as proof for vaccination against diseases including yellow fever, typhus and smallpox, and many countries still require proof of certain vaccinations when traveling. For those travelers who have relocated to foreign countries over the years, the possibility of sharing personal health information isn’t unusual, as many visa and residency applications call for medical exams.

Today’s apps have to address a host of issues around carrying health data, including privacy and standardization. For one, nobody wants to carry around a printed health record that could contain sensitive information in addition to proof of testing or vaccination. For another, such records could be forged with image-editing tools. And in this increasingly global world, a traveler’s health documents could be written in a language that is unfamiliar to an airport official.

The Commons Project, the nonprofit that is developing the CommonPass, said its app connects with websites for medical facilities, and those sites then load verification of completed test or vaccine record inside the app, limiting the amount of private information that is shared. Others are taking a similar approach.

A common request from people across the industry is for governments to work together to standardize testing and vaccination requirements. For example, travelers who are vaccinated in the United States should know that their vaccination and documentation is valid in Thailand and vice versa. — Brian Chen and Tariro Mzezewa

How long must I wait until travel picks up?

With approved vaccines being administered in Britain, Canada, the United States and elsewhere, industry insiders are hopeful that people will transition from searching for trips online to booking them.

“A safe, effective and well-distributed coronavirus vaccine is the linchpin for a return to travel normalcy,” Scott Keyes, founder of Scott’s Cheap Flights, an online booking platform, wrote in a recent email. “Great news on the vaccine front is great news on the travel front.”

But the initial distribution of the vaccine may not equal a swift return to mass travel. While some experts believe that pent-up demand will have people rushing in large numbers to book “vaxications,” others, including Anthony S. Fauci, the nation’s top infectious disease expert, think the return to travel will be gradual, with people easing their way back.

Until the vaccine is widely distributed, rigorous testing will remain a key part of the travel experience — before and after traveling. (Expect testing to be offered as an amenity at a growing number of hotels.) Still, for many in the industry, the vaccines provide a reason to be hopeful.

“After months of a ‘cautiously optimistic’ tone, we now look to this vaccine as a means to bring back some travel demand,” said Mike Deitemeyer, chief executive-elect and president of Aimbridge Hospitality, whose portfolio includes more than 1,500 branded and independent properties in 49 states and 20 countries.

Road trips, which won 2020, are expected to remain popular as they guarantee comfort and control for travelers. Cruise lines are reporting strong bookings for summer 2021 and airline travel is expected to pick up in the second quarter of the year, with international travel outpacing domestic travel, according to the travel marketing firm MMGY Global, a significant change from bookings for 2020.

Canada’s prime minister, Justin Trudeau, has said that he hopes that every Canadian who wishes to be vaccinated will have done so by the end of the year. In Canada and the United States, vaccinations will be difficult to distribute in remote and rural areas. For low-income countries with less robust infrastructure, it could take until 2024 to obtain enough vaccines to fully immunize populations. That means it could take a while for Africa’s $12.4 billion safari industry to bounce back.— T. M.

When can I get back on a cruise ship?

Since the Centers for Disease Control and Prevention lifted its “no sail” order on United States cruises October, cruise companies have been scrambling to set up an infrastructure that meets the requirements the health agency laid out for the safe resumption of sailings.

Most major cruise lines had planned to restart operations in early 2021, but the resurgence of the coronavirus has forced many of them to push back their start dates.

Carnival, Royal Caribbean and Norwegian have paused all sailings through the end of February, but it’s unlikely any large-scale operations will begin soon after that date. Already certain voyages have been postponed to late 2021 and 2022.

“We apologize to our guests, but we must continue to take a thoughtful, deliberate and measured approach as we map out our return to operations in 2021,” said Christine Duffy, the president of Carnival Cruise Line. “Our commitment to the health and safety of our guests, crew and the communities we visit is at the forefront of our decisions and operations.”

The C.D.C.’s health and safety protocols include extensive testing, quarantine measures and social distancing. Cruise operators are required to carry out simulation cruises to test the new framework before applying for a permit from the agency that will allow them to restart excursions with passengers.

Most cruises will resume sailing at a reduced capacity with limited itineraries. In the United States, initial excursions will be limited to seven days, according to C.D.C. guidelines. Masks will be mandatory in all public areas onboard vessels, including outdoor decks, according to the Cruise Lines International Association, the industry’s trade group.

Even with heightened safety measures in place, several cruise lines in Europe and the Caribbean that sailed in recent months were forced to cut their trips short after reporting virus outbreaks onboard.

While major cruise lines with the capacity to carry more than 250 passengers have said they will require testing before passengers board a vessel, the details of testing protocols during cruises are still unclear.

“The testing framework remains fluid because the test time frames have been changing over the last seven months in terms of how quickly and effectively they can turn around,” said John Downey, president of the Americas at Hurtigruten a Norwegian cruise company, which is aiming to restart its European voyages in April. “We are working with experts to explore the most recent testing protocols and once we have the best option available, we will figure out how to execute that plan operationally.”

Despite the risks and challenges, cruise fans are eager to sail and have been booking excursions for 2021. Since April, 80 percent of cruise shoppers surveyed by the Cruise Critic, a major cruise planning website, said they had booked for next year.

A recent report by the website also found that travelers are spending more on cruises with the average cost of a booked cruise up by 120 percent, compared to the same period last year, mainly because more people are booking luxury and river cruises that have a smaller capacity and higher fares.

Regardless of the new protocols and increase in fares, the recent rollout of coronavirus vaccines has created optimism within the sector, which has lost billions of dollars and thousands of jobs since the pandemic halted cruise ships in March.

“the cruise companies are doing everything they can to ensure that we can get back in a safe way, and I think they are nearly there,” said Shannon Wright, a 45-year-old beautician from Newcastle, England, who has booked two cruises for 2021. “ It’s worth the wait.” — Ceylan Yeginsu

City or country? United States or international? Where can I expect crowds?

Since April, the majority of Americans have chosen to travel domestically, taking road trips, exploring small towns, scenic drives and nearby lakes and beaches. That trend is likely to continue into 2021, but interest in international travel has increased since November following the news of vaccines.

Cancun and Tulum in Mexico are among the top searched destinations for American travelers in 2021, alongside Oahu and Maui in Hawaii, according to a 2021 trends report by the online travel agency Expedia. Further-flung destinations such as French Polynesia, the Maldives and Bali are also popular.

“We expect pent-up demand for travel will continue to grow with the availability of Covid-19 vaccines,” said Monya Mandich, the vice president of Expedia Group Media Solutions. She added that of more than 11,000 people surveyed for a recent study, 57 percent said they would be comfortable traveling if a vaccine was widely available.

Recent search traffic also indicated an eagerness among travelers to return to major cities for cultural holidays, with most interest starting in June to late 2021. In the United States, Las Vegas, New York and Los Angeles were among the most searched urban destinations, according to Expedia. Data from the travel search engine, Skyscanner, showed that London is the most searched destination for Americans looking to travel internationally next summer.

Answers to Your Vaccine Questions

With distribution of a coronavirus vaccine beginning in the U.S., here are answers to some questions you may be wondering about: