Nervous flyer? A guide to doing the ultimate world tour in 2022, visiting 27 countries in 181 days – without setting foot in an airport

Now more than ever, the idea of sailing around the world, leaving all your cares at home, has enormous appeal. You could book a world cruise for early next year and be home by Easter.

But what about a world tour with a difference?

Take it slower and allow time to explore more ashore with a tour of 27 countries. Here we show you how it can be done – in 181 days on seven ships, a yacht and a train. And all without setting foot in an airport… 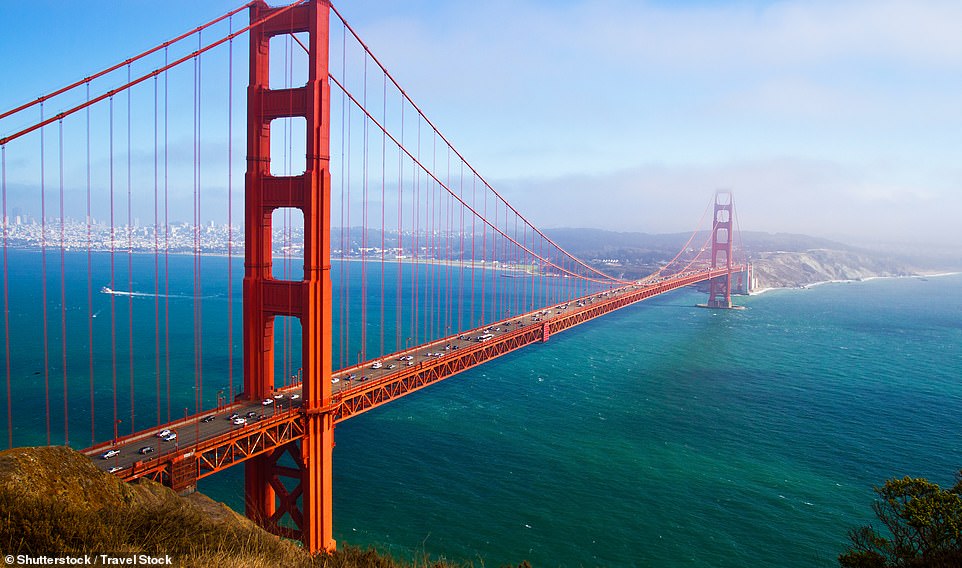 Epic adventure: The first leg of the world tour runs from Southampton to San Francisco, with the Fisherman’s Wharf, Alcatraz and the Golden Gate Bridge among the city’s highlights

The voyage: Sailing across the Atlantic, the first call is Tenerife, the largest of the Canary Islands. Next stop is Barbados followed by Curacao. Transit the Panama Canal before calling at Huatulco and Cabo San Lucas on the Pacific coast of Mexico.

Don’t miss: Whale watching on the Sea of Cortes, which is fizzing with marine life – dolphins, sea lions, pelicans and whales that come to calve.

Your ship: Adults-only Aurora offers classic cruising. Swim every day whatever the weather, thanks to a retractable Skydome.

There are 12 days until your next ship sails, so when you’ve seen San Francisco – Fisherman’s Wharf, Alcatraz – head over the Golden Gate Bridge to the vineyards of the Sonoma and Napa valleys, or go east to Yosemite National Park. 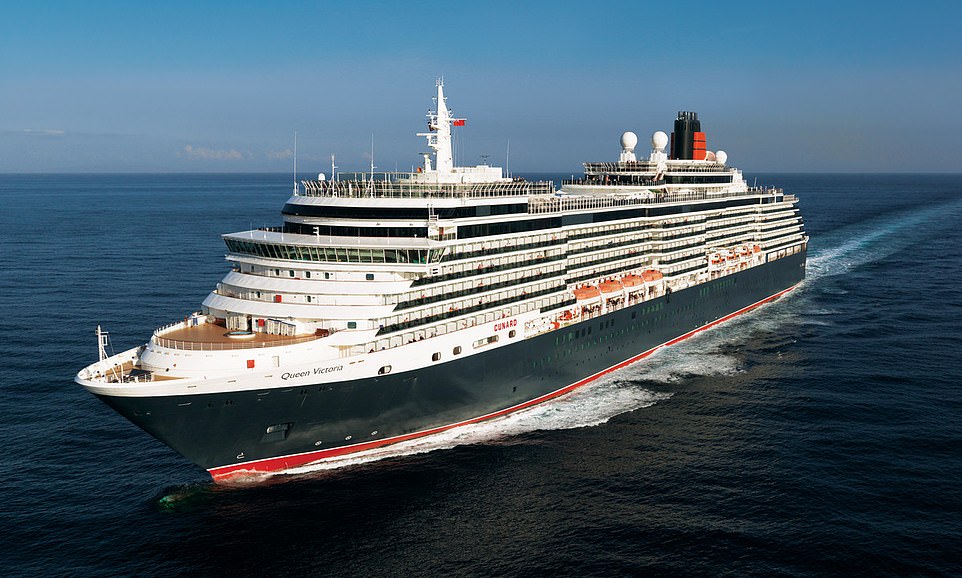 22 days, 15 at sea, five ports, five countries and crossing the Equator and the International Date Line.

The voyage: After five days heading across the Pacific, the Hawaiian archipelago comes into view and it is time to step ashore in Honolulu. Back at sea, first-timers crossing the Equator can expect a dousing from King Neptune and you’ll lose a day crossing the International Date line en route to Samoa and Fiji before arriving in New Zealand.

Don’t miss: New Zealand is the farthest country from the UK, so make the most of the time in the three ports of call. Experience hissing geysers in Rotorua, bungee jump from Auckland Bridge and explore the Waitangi River on a Maori war canoe.

Your ship: Queen Victoria has dining rooms designated by cabin grades, but everyone gets dressed up for gala balls in the Queens Room. Spend your days at sea watching a play in the theatre or playing quoits and shuffleboard on deck.

It is six days until it’s time to board your next ship. Climb the Sydney Harbour Bridge, take a tour of the Opera House, hang out on the city’s beaches and scoot inland to the beautiful Blue Mountains. 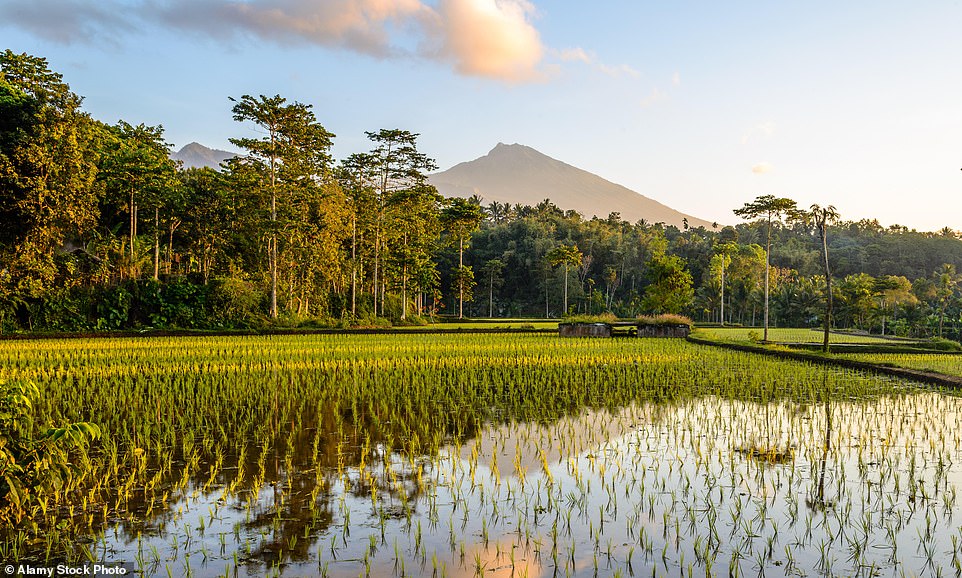 Paddy fields framed by lush surroundings on the Indonesian island of Lombok, which you can see on a Royal Princess cruise

The voyage: The first port of call is Brisbane, then on to Darwin. You’ll also see Lombok, Bali’s less-visited neighbour, and Saigon.

Your ship: You can stroll out to sea on Royal Princess, thanks to the astonishing steel and glass SeaWalk, curving out 128ft above the waves. Or enjoy cocktail theatre from juggling waiters in the glass-floored SeaView Bar.

There is no need to rush around in Hong Kong, you’ll be there ten days. 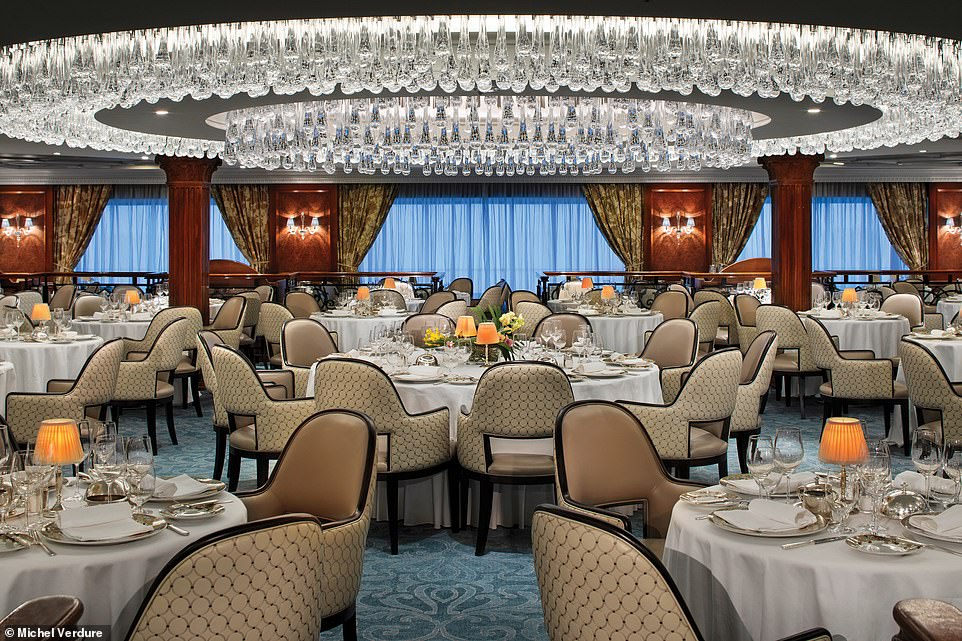 The voyage: You’ll be immersed in the sights of South-East Asia with overnight stays in Vietnam’s Hanoi, Hue and Saigon, and days in Nha Trang in Vietnam and Kampot in Cambodia.

Don’t miss: Meditating with a Buddhist monk on the deck of a wooden junk gliding through Halong Bay.

Your ship: A foodies’ favourite, 700-passenger Insignia has plant-based menus and French and Oriental cuisine.

After seeing Bangkok, head for the beach – Koh Samet island is just four hours away. 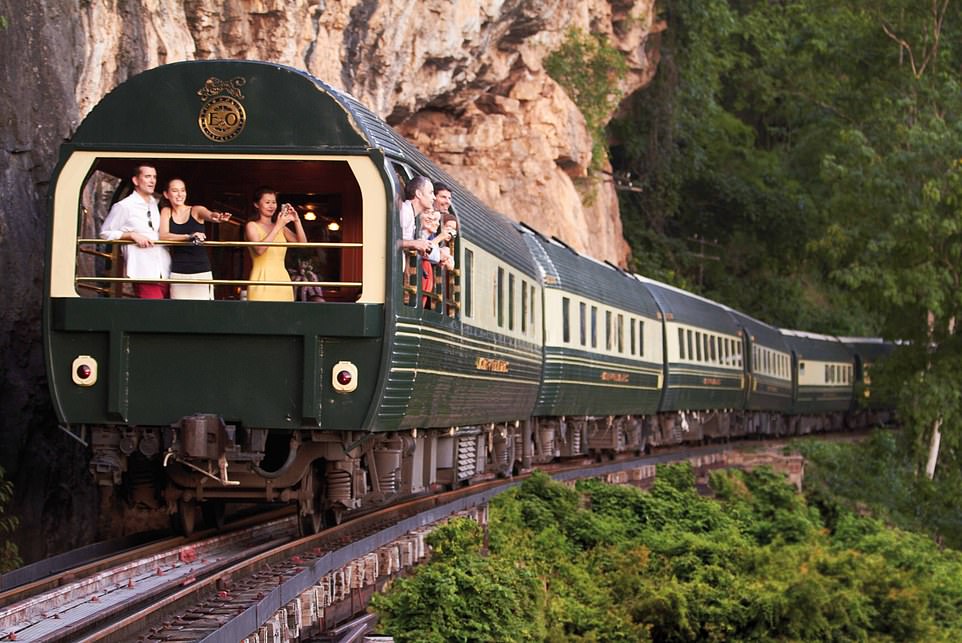 The gleaming, deep-green Belmond Eastern & Oriental Express is opulently fitted out with a piano bar and observation carriage

Your journey: The train rolls west from Bangkok to Kanchanaburi, site of the Bridge on the River Kwai. Travelling south through Thailand and into Malaysia, the train stops in Kuala Kangsar before reaching Singapore.

Don’t miss: A village visit and hill trek with a naturalist in the Malaysian countryside.

Your train: The gleaming, deep-green Eastern & Oriental Express is opulently fitted out with a piano bar and observation carriage.

You’ll have time to play before your next ship. So, when you’ve sipped Singapore Slings at Raffles hotel and strolled through Chinatown and Little India, strike out to the beaches of Sentosa island and the walking trails of Bukit Timah Nature Reserve. 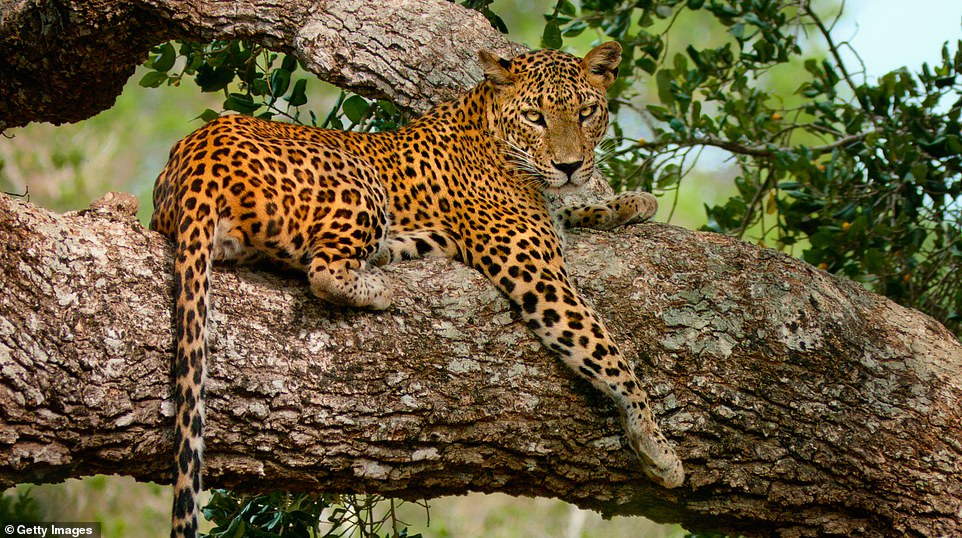 21 days, 12 at sea, seven ports, six countries and another canal.

The voyage: After four weeks on land you’ll be glad of three days to get your sea legs back, sailing west to Sri Lanka, calling at Hambantota, for leopard and elephant spotting in Yala National Park, and at Colombo. Next stop is Cochin on India’s south-west coast. Across the Arabian Sea, an overnight stay in Safaga gives time to visit Luxor and the Valley of the Kings. Then it’s the Red Sea port of Aqaba before transiting the Suez Canal to Ashdod, the port for Jerusalem and the Dead Sea. Finally, you cross the Mediterranean to Crete.

Don’t miss: Walking through Al Siq, a narrow gorge that opens on to the city of Petra, ancient capital of the Nabataean Kingdom.

Your ship: Azamara Journey is a 700-passenger ship and every voyage includes an AzAmazing evening.

You have three days in Athens, time to see the Acropolis and its museum, the Parthenon and the Temple of Zeus. 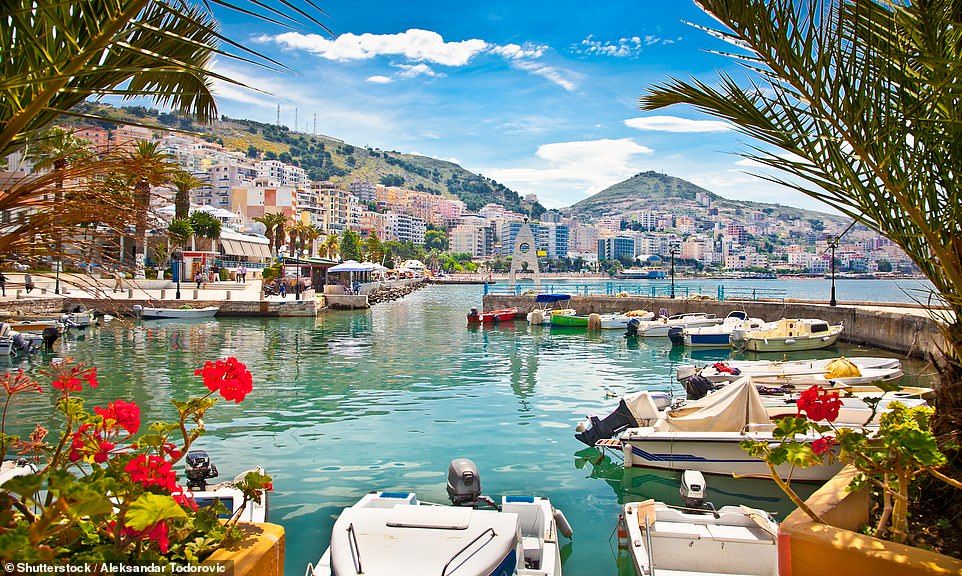 On a ten-day cruise with Seabourn you’ll visit three ports in Greece and Saranda, in Albania, pictured

Your voyage: It is a ten-day cruise but you’ll be jumping ship halfway. Not before visiting three ports in Greece (Santorini, Pylos and Kefalonia) and Saranda, in Albania.

Don’t miss: Boarding a catamaran in Santorini to sail across the caldera to bathe in hot springs on an island created by a massive volcanic explosion 3,600 years ago.

Book: Fares start from £5,649pp for a ten-day cruise that finishes in Valletta, Malta (seabourn.com).

There are 11 days until you join your last ship. Time to sneak in a week’s side-cruise island-hopping along the Dalmatian coast. 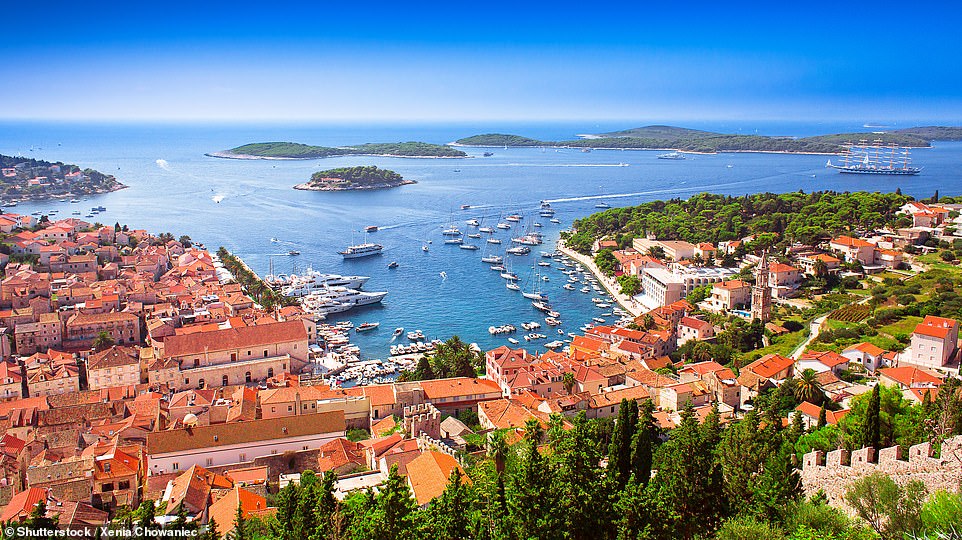 On Motor yacht MS Agape Rose you can go island hopping around Croatia. Pictured, the island of Hvar

The voyage: Always in sight of land, you’ll hop on and off the Croatian islands of Brac, Hvar, Korcula, Mljet and Vis, and visit Split and Omis on the mainland, too.

Your ship: Motor yacht MS Agape Rose has 18 cabins and lots of space for sunbathing. 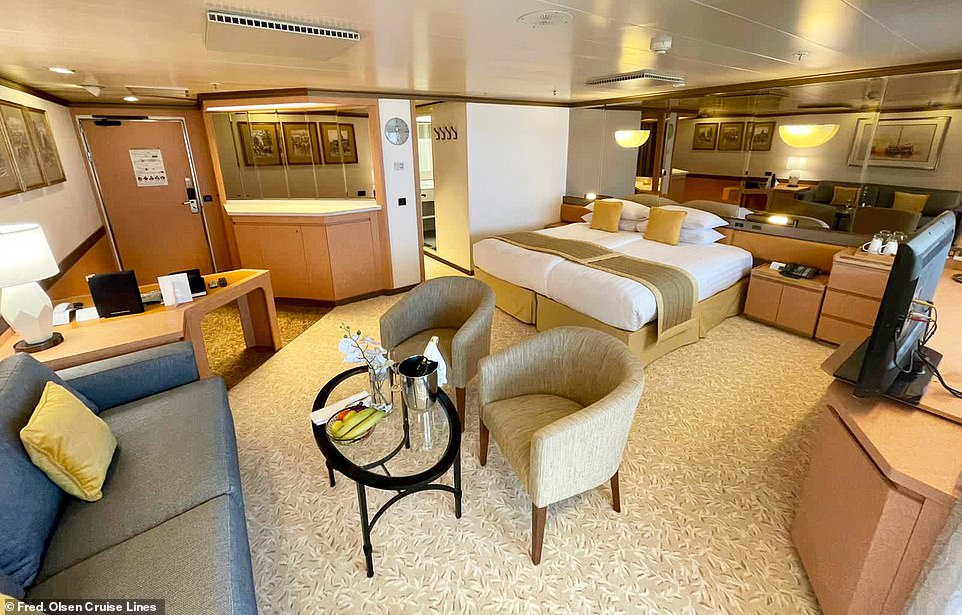 Bolette is the flagship of the Fred. Olsen fleet. Pictured, one of the ship’s premier suites

The Voyage: Your shipmates will have been on board more than a week when you join them. On the Adriatic Sea you’ll visit Neum in Bosnia and Herzegovina, Split in Croatia and Durres in Albania, then sail across the Med to Cagliari in Sardinia and on to Tangiers, Europe’s gateway to Africa.

Don’t miss: A glass of mint tea on an outdoor terrace at Cafe Hafa in Tangiers with views of the Atlantic and distant coast of Spain.

Your ship: Bolette is the flagship of the Fred. Olsen fleet with 11 spacious bars and lounges.

Book: The 18-night round-trip cruise starts in Southampton on June 14. From £2,799pp, for the ten nights on board (fredolsencruises.com).

Congratulations! You have returned home, six months after setting off, in time to enjoy a glorious English summer.

All fares quoted are for cruise only.