Amazing footage of the animal park big cat encounter where the HUMANS are caged: Tourist behind metal mesh on jeep films lions eating hunks of meat just centimetres away

Nerve-shredding footage shows tourists in a cage coming face to face with a pair of lions that climbed all over it, with one man feeling them ‘breathing down his neck’.

Dustin Campbell visited the Marakele Animal Sanctuary in South Africa and took part in its unique ‘Lion Mobile’ trip. Here it’s the visitors that are caged – on the back of an open jeep with hunks of meat used to lure in lions for a sensational meal-time meeting.

His palm-sweating footage shows a male lion clambering on top of the cage to chomp some of the bait, just centimetres away from his head. 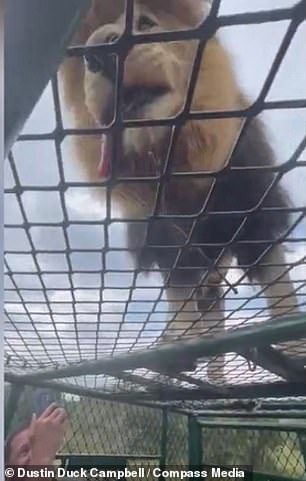 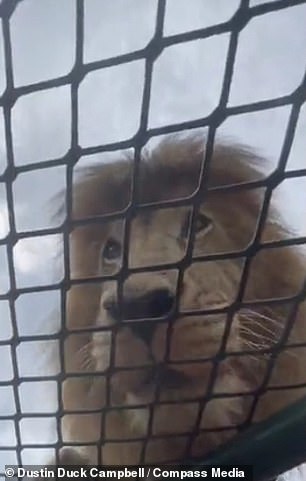 Dustin Campbell visited the Marakele Animal Sanctuary in South Africa and took part in its unique ‘Lion Mobile’ trip. Guests sit in a cage on the back of an open jeep and hunks of meat are used to lure in lions for a sensational meal-time meeting 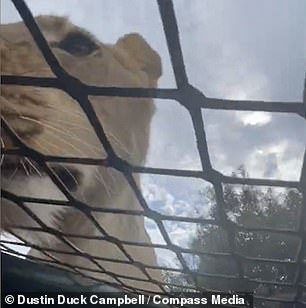 Nuisance wildlife removal worker Dustin, 42, had a front-row seat to the male’s massive teeth cutting through the fleshy food when a lioness suddenly appeared right behind him.

Taken aback, Dustin, from West Monroe, Louisiana, USA, joked: ‘I can feel her breathing down my neck, as she also chomped down on some food.’

He added: ‘There’s something about feeling a lion’s breath on your neck that will make the hair on your arms pop up.

‘The sensation was completely foreign to me. It’s comparatively close to a really strong adrenaline rush.

‘An amazing mixture of curiosity and astonishment.

‘The main smells were the fear from the other guys in the cage and the fresh meat snacks the lions were eating.

‘The only thing between the two massive lions outside and us was the mesh of the cage.

‘It was as close as you could be.

‘Seeing them feeding on pieces of meat on top of the cage was awe-inspiring.’